A Grade I Listed Building in Osbournby, Lincolnshire 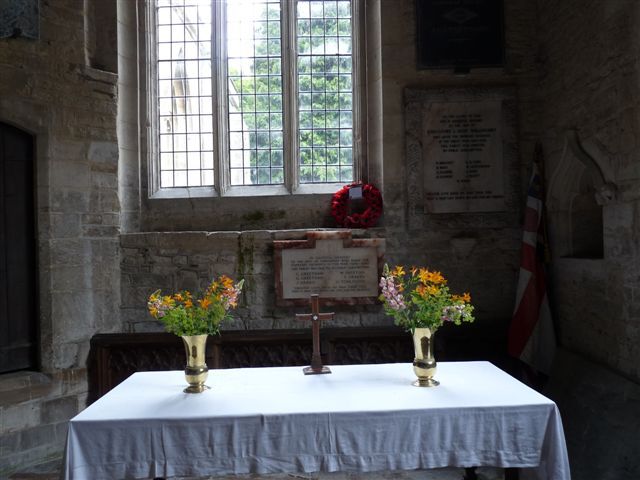 Parish church. C12, C13, C14, C15, C18 and C19. Coursed limestone rubble
with ashlar quoins and dressings, plain tiled and leaded roofs. West tower,
nave, chancel, north and south aisles, south porch. C13 west tower of 3
stages, roll moulded plinth, chamfered string courses, plain parapet and
clasped corner buttresses. In the belfry stage are reticulated 2 light C14
cusped ogee headed belfry lights with quatrefoils, wave moulded surrounds
and hollow moulded heads. In the west wall a single lancet. The north aisle
has a blocked C13 doorway and 3 three light C15 windows with cusped heads
to the lights and chamfered 4 centred arched heads. In the east wall is a
tall matching three light window. The C14 chancel has chamfered plinth and
plain parapet. In the north wall are 3 two light windows with ogee tracery
to the steeply pointed cusped lights all in hollow chamfered surrounds. C17
4 light east window has cusped tracery to the tall lights and a cinquefoil
over. On the south side are 3 windows matching those to the north as well
as a plain 4 centred arched priest's door. The C14 south aisle has a wider
3 light window and 2 further 3 light windows with curved intersecting
tracery to the heads, daggers and ogee tracery. The C14 gabled south porch
has a moulded triple engaged shafted outer doorway with annular impost and
double chamfered arch, with set back gabled butresses. The side walls have
cusped ogee headed panels above the benches supported on engaged annular
shafts. The C14 inner doorway also has engaged shafted reveals, moulded
annular imposts and a moulded head. Interior: the 4 bay nave arcades have
C13 octagonal filleted piers and double chamfered arches with hollow
moulded heads. Circular respond to the west end of the south arcade.
Blocked C13 double chamfered tower arch with triangular headed early C18 4
panelled door in the blocking. Tall C14 double chamfered chancel arch with
engaged shafted reveals and moulded octagonal imposts. In the south east
angle of the nave is a statue bracket with a human face to the underside.
In the south aisle is a four centred arched doorway to the rood loft and a
brattished statue bracket, also a crocketted trilobed outline in red paint.
In the north aisle is a plain piscina and an elaborately decorated statue
bracket with brattishing and panels with shields and chevrons. In the
chancel south wall is a fine C14 sedilia having cusped moulded ogee arched
heads with crockets, human head stops and foliate terminals. Beyond is a
contemporary piscina with cusped ogee arched opening. On the north side is
an aumbry with ogee head. Fittings: C19 carved oak pulpit and pews, but the
lower panels of the C14 chancel screen remain with fleurons and cusped
mouchettes. In the nave a fine collection of C14 oak bench ends including
St George and the Dragon, Adam and Eve and Reynard the Fox, together with
cusped blank arcading and foliage. Mid C12 circular tub font with pelleted
intersecting blank arcading to the sides and hobnail decoration to the rim.
At the west end of the nave is a painted Royal Arms of George III dated
1797 and a raised and fielded charity board. Also triptych of Commandment
boards with a painted figure of Mary in the centre by T.Philips of Bourne
and a further painted panel of a High Priest. Monuments; In the north aisle
a plaque to Wm. Greene, yeoman, d. 1722, fluted Doric pilasters support
acanthus leaf capitals and a round arch, by Robt. Copeland. Also in the
north aisle a similar monument to John Greene, d. 1720, with scrolls and
Death's head to an oval panel.