A Grade II* Listed Building in Aunsby and Dembleby, Lincolnshire 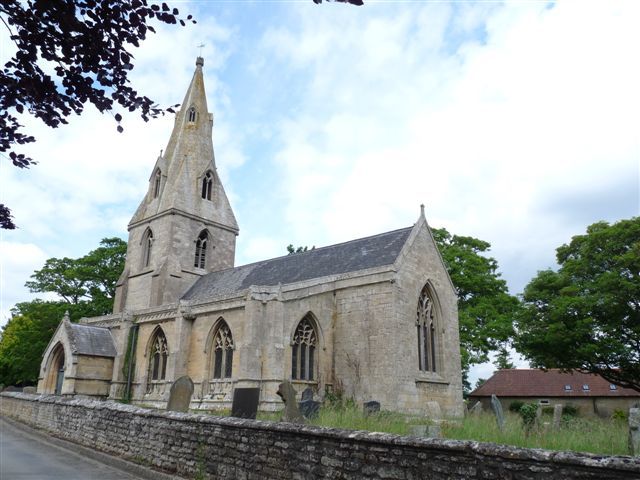 Parish church. C12, C13, C14, C15, restored 1861 by W. Thompson, Architect,
of Grantham, when the tower and spire were rebuilt. Coursed limestone
rubble and ashlar, slate and lead roofs having raised stone coped gables.
West tower and spire, nave, north and south aisles, south porch, chancel.
C13 west tower of 3 stages with chamfered plinth and string courses,
stepped set back buttresses and broach spire with 2 tiers of Y-traceried
and gabled lucarnes in alternating directions. To the belfry stage are
single 2 light louvered openings with shafted mullions, pointed heads to
the lights and trefoils, all in pointed and chamfered surrounds. To the
ground floor on the west side is a single double chamfered pointed light.
In the west wall of the south aisle is a steeply pointed and moulded window
and in the north aisle is a C15 2 light window with cusped Perpendicular
tracery. The north wall contains 2 broad C15 3 light windows matching that
to the west. There is also a doorway with a pointed head, rectangular
surround and foliage to the sunk spandrels. There is a further 3 light
window in the east wall of the aisle matching the rest. C19 3 light chancel
east window with cusped flowing tracery. In the east wall of the south
aisle is a C14 3 light window with cusped flowing tracery forming daggers
and mouchettes in a hollow chamfered pointed surround. In the south wall is
a pair of 2 light C14 windows matching that to the east. The aisle also has
crocketed gabled buttresses and a frieze enriched with cusped running
scrolls. The gabled south porch has a continuously moulded outer doorway
with recut head, side benches and a C14 inner door, also continuously
moulded, with fleurons and a crocketed and pinnacled hood. Interior: 2 bay
late C12 north arcade with circular pier and responds having elaborate
square capitals bedecked with partially unfinished stylised foliate
scrolls, double stepped round arches with chamfered inner order. C14 3 bay
south arcade with filleted quatrefoil piers and reveals, foliate capitals
and 2 orders of wave moulding to the pointed heads. Broad C13 tower arch
with filleted engaged double shafted reveals and triple chamfered arched
heads, above is a single lancet. Recut C13 chancel arch has engaged shafted
C12 reveals with cushion capitals and a double chamfered pointed head. In
the south wall of the south aisle is a reset C14 human head corbel. In the
north wall of the chancel is a broad C12 archway into the north aisle with
paired engaged shafted reveals, cushion capitals and a chamfered and
stepped round head. In the south wall of the chancel is a C14 archway into
the aisle, double wave moulded and dying into the reveals. Fittings: Recut
late C12 tub font with engaged octagonal angle shafts having square stiff
leaf capitals and C19 octagonal base. Otherwise fittings are C19, including
the panelled softwood pulpit.