A Grade I Listed Building in Newton and Haceby, Lincolnshire 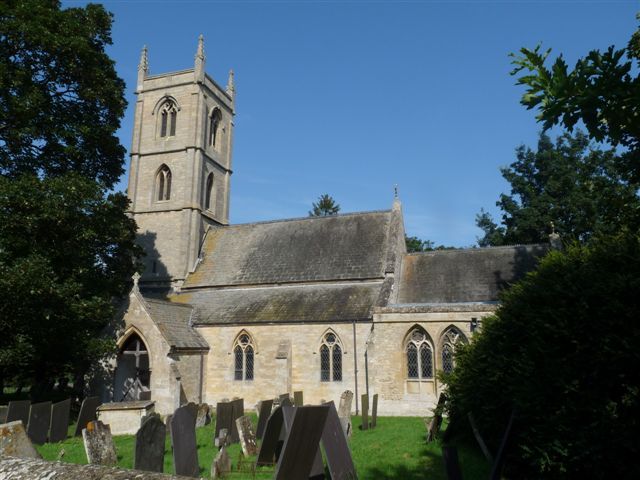 Parish church. C13, C14, C15, restored 1867. Coursed limestone rubble and
ashlar, slate and lead roofs having raised stone coped gables and crested
ridges. West tower, nave, aisles, south porch, chancel and south chapel,
vestry. Tall 4 stage early C13 west tower with chamfered plinth and string
courses, set back buttresses and plain parapet with angle pinnacles. In the
belfry are paired C15 trefoil headed lights with Perpendicular tracery to
the heads and pointed chamfered surrounds. To the west is a 2 light window
with crude intersecting tracery and pointed head. In the third stage are
single Y-traceried louvered lights with pointed heads. In the west wall of
the south aisle is a C14 2 light reticulated window with cusped ogee
tracery and a quatrefoil. The C14 north aisle has a continuously moulded
and pointed doorway and 2 three light reticulated windows with cusped
ogees, quatrefoils and triangular headed wave moulded surrounds. The C19
vestry has a pointed doorway and a 3 light window with mullions and cusped
4 centred arched heads to the lights. In the east wall is a C15 2 light
window with Perpendicular tracery. The C13 chancel east window has 4 tall
lights with slender intersecting tracery to the pointed head. The C13 south
chapel has a plain parapet and a 2 light reticulated window to the east
with cusped ogee arches, trefoils and a triangular headed surround, and to
the south are 2 repositioned C13 2 light windows with geometric tracery
comprising a trilobe, trefoils and a quatrefoil, all in pointed and
chamfered surrounds. The 1867 south aisle has 2 two light windows with
geometric tracery and pointed chamfered surrounds. The contemporary gabled
south porch has a pointed and wave moulded outer arch with engaged shafted
reveals. The inner door has C13 moulded and filleted reveals and C19
capitals to the moulded head.Interior: 3 bay C13 nave arcades with
octagonal shafts, moulded and splayed capitals and double chamfered arches.
There are human heads to the label stops and at the east end of the south
arcade the respond also bears a human mask. Early C13 tower arch with
chamfered and roll moulded head and single angle shafts, one with a cushion
capital. C19 chancel arch with clustered and collared shafted reveals is
flanked by single triangular headed archways dying into the reveals; there
are single similar arches in the side walls of the chancel. The south
chapel has a pointed headed piscina to the south and to the north a
matching squint. The chancel has a C13 double piscina on the south side,
now with C19 tracery and shaft, but retaining the original dogtoothed
triangular surround with 3 human heads. On the north side is an early C14
tomb recess with moulded ogee arch bedecked with ballflowers and floriate
finial. The tapering coffin lid has fleurons to the chamfered sides.
Fittings are C19 including the gilded alabaster altar and reredos depicting
Christ in Majesty and the 4 Evangelists. Panelled octagonal oak pulpit with
ashlar base. Plain tapering octagonal font with chamfered base and graffito
'Thomas' to the east. Monument: In the south chapel an alabaster wall
plaque with broken segmental cornice, paterae and armorial escutcheon to
Mary Savile, d. 1637, bolection moulded rectangular inscription panel and
moulded base with cherub flanked by scrolls.