A Grade I Listed Building in Swaton, Lincolnshire 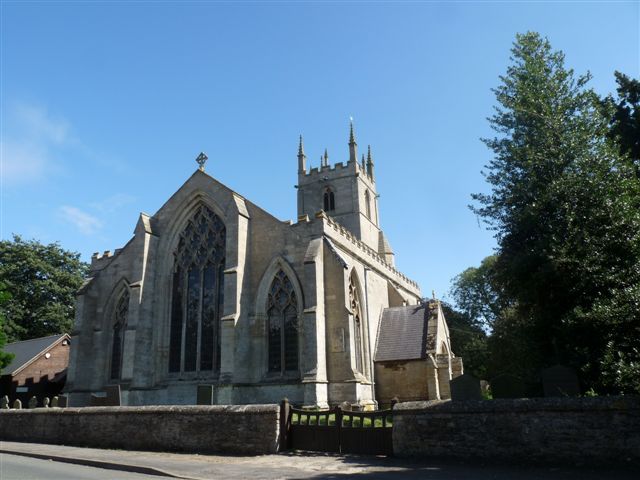 Parish church. C12, C13, C14, C17, restored 1851, 1856 and 1909.
Limestone ashlar, some coursed rubble, copper roofs. Nave,
chancel, north and south aisles, north and south transepts,
crossing tower. West front has stepped and gabled buttresses and
a large 4 light reticulated window in a continuously moulded
pointed surround with diminutive annular imposts. To either side
are single smaller 2 light matching windows. The north aisle has
an embattled parapet and stepped buttresses. A pointed and
moulded dodorway is set between 2 three light reticulated
windows. In the north wall of the transept is a similar 3 light
window. The square 2 stage tower has an embattled parapet with 6
crocketted pinnacles. In the belfry stage are pointed cusped
ogee headed louvred openings in hollow chamfered pointed
surrounds with hoods. In the lower stage of the tower is a pair
of C13 lancets in a pointed chamfered surround. The C13 coursed
rubble chancel has stepped ashlar buttresses. There are 3
lancets on the north side with chamfered surrounds and a round
headed chamfered doorway with moulded imposts. Fine C13 2 light
east window with geometric tracery and quatrefoil in a moulded
surround. Above is a blank sunk quatrefoil panel. The south
chancel wall also has 3 chamfered lancets. The south transept
has a C19 round headed doorway to the east, and to the south a
large C17 mullioned and transomed 4 light window with reused C14
moulded reveals. Above is an C18 sundial and there is a reused
C17 coffin slab to the gable. In the south side of the tower is
a C13 2 light window matching that to the north and below is a
blocked C12 round headed window. The south aisle wall contains 2
large 3 light reticulated windows. The gabled south porch has
gabled angle buttresses and a moulded outer doorway with double
shafts and annular capitals. The inner doorway is also pointed
with 2 filleted orders of moulding to the head and angle shafts
with annular capitals. Side benches. Interior: tall 3 bay nave
arcades, quatrefoil piers with concave quirks, engaged annular
capitals and double wave moulded pointed arches. C14 king post
tie beam roof of nave continues uninterrupted over the aisles.
In the eastern ends of the aisles are double chamfered doorways
into the transepts. Above the southern door is an incomplete C13
red painted Wheel of Life. Double chamfered chancel arch with
filleted shafted reveals and moulded octagonal imposts. In the
north east angle of the nave a short run of C12 chevron ornament
marks the springing of an earlier arcade. Above the chancel arch
is a 2 light C13 window matching those to the sides of the tower.
In the north transept is a C14 piscina with cusped ogee head and
crocketted finial, and in the south transept is a plain aumbry
and a trilobe headed piscina. In the west wall of the transept
is a blocked C12 round headed window. Under the tower are double
chamfered arches matching the chancel arch. The rear arch of the
east chancel window is shafted and richly moulded. Fittings:
Minton tiled sanctuary. A good collection of C14 poppybead bench
ends, some 35 in all, with blank panel tracery having trefoils, quatrefoils
and foliage. Elements of a C14 screen are reused in the south transept,
including a moulding top beam with fleurons. Otherwise the woodwork is all
C19 in a matching C14 style. C14 octagonal ashlar font has continous panels
of fleurons to the sides, ball flowers to the lower chamfer and an engaged
shafted base with annualar capitals. Monuments: early C14 effigy of a lady
in the north aisle, she is clad in a wimple with tightly buttoned sleaves,
hands clasped in prayer and the feet resting on a dog. In the south aisle is
an ashlar plaque to John Billings, d.1773, in the form of a scrolled oval
panel with cherub. Also a white marble tablet to John West, gentleman,
d.1853, in the form of a plain pedimented obelisk.