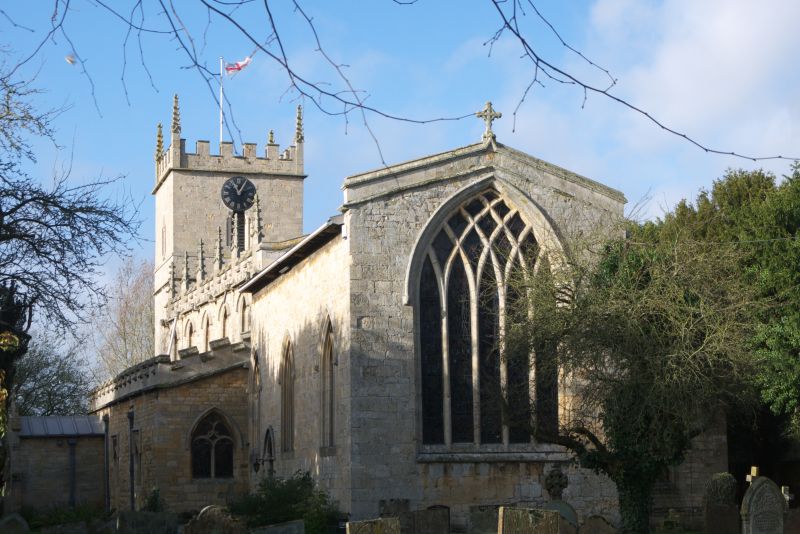 BASSINGHAM NEWARK ROAD
SK 95 NW
4/6 Church of St Michael
and All Angels.
23.8.67
GV II*
Parish church. Cll, C12, C13, C15. 1782 by Thomas Bell and restored 1860 by
J H Hakewill. West tower, nave with noth and south aisles, south porch, chancel
and north chantry chapel, now vestry. Coursed rubble and ashlar with lead roofs.
Ashlar quoins. Tower rebuilt 1782, 3 stages with chamfered plinth, plain first
stage band, moulded second stage band and plain cill band, topped with moulded
band, battlements and 4 crocketed pinnacles. To west a deeply recessed pointed
arched doorway and to south a small flat headed doorway. Each side has a circular
opening on the second stage, and a single light pointed arched bell opening
in an Early English style. The clerestory is of 5 bays, topped with ornate
battlements and crocketed pinnacles, the gable has a moulded coped parapet
surmounted by a cross. The north aisle is topped by a moulded coped parapet,
and has a small C15 chamfered doorway with a triangular head. To the left is
a 2 light C15 window with segment headed lancets under a triangular head, beyond
is a buttress and then another similar window. Beyond that a 2 light flat headed
window and then another buttress. To the right is a 2 light flat headed window
with panel tracery under a hood mould. The vestry has a 2 light chamfered mullion
window to the north, and to the south a round headed 3 light window with flowing
tracery under a hood mould with head label stops. The chancel, largely rebuilt
1860, has a single pointed lancet to the north, and a large 5 light window with
intersecting tracery under a hood mould with label stops to the east. The south
wall has 3 tall pointed arched windows with Y tracery all under hood moulds
with label stops, there is also a small pointed arched doorway. The south aisle
has a battlemented parapet with to the east a pointed arched window with flowing
tracery, under a hood mould with label stops. On the south are 2, 2-light flat
headed windows with panel tracery under hood moulds. The south porch has a
plinth and side buttresses, and a coped gable with kneelers topped with a cross.
A pointed arched opening with double chamfered arch and single shafts. The
interior has stone benches and the south doorway has a double chamfered pointed
arch. Interior: The 3 bay north arcade, rebuilt 1860, has round arches, and
2 circular piers with scalloped capitals. Beyond to the east a single tall
C13 pointed double chamfered arch with octagonal responds and moulded capitals.
The 2 bay C13 south arcade has a circular pier and responds with a ribbed leaf
capital. Beyond to the east is an arch similar to that on the north arcade,
there are 2 more of these arches in the north wall of the chancel. Small pointed
tower arch of 1782, the unusual chancel arch with zig-zag decoration was rebuilt
1860. Octagonal C15 fort with quatrefoils. Remains of C15 screen in lower
arch. 6, C16 linen-fold panelling bench ends, in the west of the nave, the
remainder C19. C15 nave roof, restored 1960, the remainder of the roofs C19.
2 late C18 commandment boards in the tower. A single charity board in the south
aisle. C19 altar rail, organ and encaustic tiles. C19 pulpit has single panel
dated 1674. Alms box dated 1668. Stained glass east window by F X Zettler
of Munich c1900.