A Grade I Listed Building in Stamford, Lincolnshire 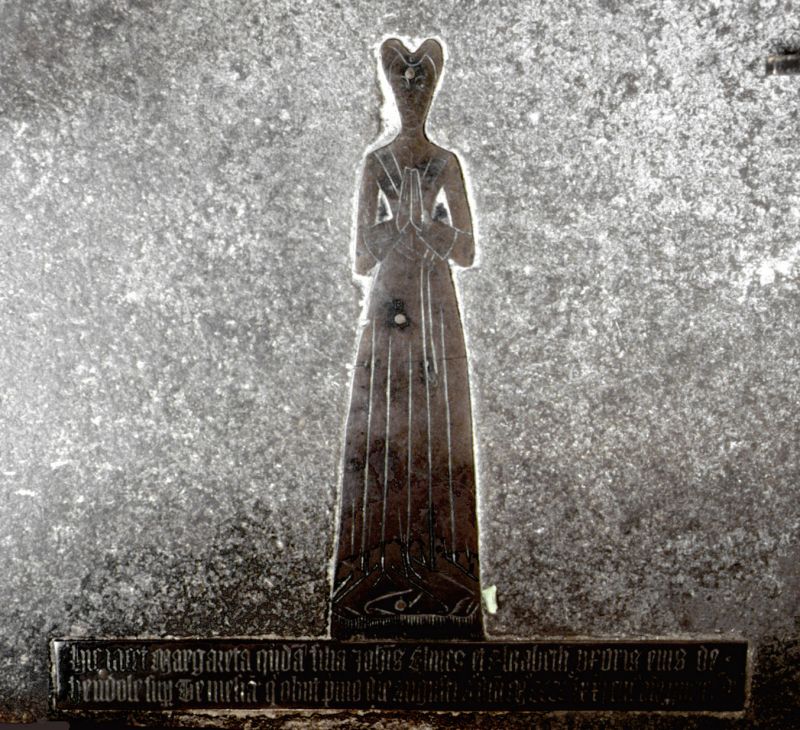 The probably C12 NE angle of the nave is the earliest surviving fabric, and the irregular plan suggests the church developed around an older structure. Otherwise, the chancel, S chapel, nave and S aisle were all rebuilt in the early to mid C13, at which time there was also an internal tower porch in the W bay of the S aisle that rose above the S aisle like a turret. This was presumably removed when the present NW tower was added in the late C15, probably with the patronage of John (d.1475) and William (d.1489) Browne. Other C15 work, possibly of several phases, included rebuilding the upper parts of the walls, the addition of the clerestory, the rebuilding of the chancel arch and the construction of the N vestry. Galleries were added in the C18, but were removed in the C19. There were several restorations in the C19, including in 1856 by E Browning, who rebuilt the vestry; in 1871 by T G Jackson, when the S chapel was partly rebuilt; and in 1878 when the chancel was refitted.

EXTERIOR:
The church stands on a prominent site at the corner of the marketplace and is dominated by the tall NW tower. Several quoins at a high level in the NE corner of the nave survive from a probably C12 nave, but otherwise the church was wholly rebuilt in the C13. The lower part of the walls of the chancel, S chapel, nave and S aisle have external C13 blind arcading with moulded arches on detached shafts, with alternating bell and stiff leaf capitals. At the W end the heads of the arches were rebuilt and given cusped four-centred arches in the late C15. There are elaborate C13 pilaster buttresses at the corners and in the centres of the walls. The N aisle and the upper parts of the nave and S aisle walls were rebuilt in the late C15, when the church was given low pitched roofs, a clerestory and embattled parapets. The windows have late Perpendicular tracery. A turret over the SW corner of the S chapel was added in 1871. A shallow projection on the S side of the S aisle, over which the blind arcading continues, contains a stair formerly to the space over the W end of the S aisle, but now opening onto the leads of the aisle.

The late C15 NW tower is of four stages. The third stage, above the nave roof, has cusped panelling, a band of quatrefoils and an embattled cornice. The clasping buttresses terminate in small turrets. There is a large W window flanked by canopied niches in the lower stage. On the E face of the second stage is a square window with a C15 clock face integrated into it, and on the N is a lozenge shaped panel with marks for the Browne family. The bell stage windows are very large and have pairs of transomed lights within a larger opening. The tall, octagonal broach spire has three tiers of elaborate, gabled lucarne openings.

The N porch leads into the base of the tower, and is conceived of as a miniature fortified gateway with pinnacles and an embattled cornice over the entrance arch. The S porch is also C15, but of a different, possibly slightly earlier, character to the NW tower and N porch. It replaced an earlier porch set within the W end of the S aisle, and the remains of the entrance to the older porch is still visible above the roof of the present porch. It has a tall, ogee gable with a finial, crockets and pinnacles around the entrance arch, and a barrel vault with decorative cusped panels on the interior. The N vestry was rebuilt in the C19 but stands on an earlier basement, which retains the jambs of an earlier window on the N.

INTERIOR:
The interior is plastered and painted with exposed stone dressings, and is much plainer than the outside, although the C13 arcades are still very rich. There are fine angel roofs in the chancel and S chapel.

The N and S nave arcades, and the chancel arcade are all of the C13. The S aisle is early C13 and was originally of three bays. It has deeply moulded arches on piers with clustered shafts with water holding bases, shaft rings and stiff leaf capitals. The E arch has nailhead ornament. The S aisle was extended one bay to the W in the C15, and the present arch apparently replaces a door to the former internal S porch. A shaft in the W corner of the aisle of similar character to the arcade implies the presence of a former vault in this area, and a small C15 door in the S wall of the aisle leads to a C13 stair that formerly gave access to the space over the vault. The two-bay arcade to the S chapel is slightly later than the S aisle and has one moulded and one chamfered order on a round pier with a stiff leaf capital. There is a fine C13 piscina in the E wall of the S chapel. The N arcade is mid C13 and has two chamfered orders on round piers with water holding bases and coved capitals.

The chancel arch was rebuilt in the C15, and the arch springs from battlemented corbels set into a plain wall face, probably cut back from an earlier, narrower arch. It is likely that the lack of articulation on the lower part of the arch was originally concealed by an elaborate screen. The N vestry is C19, but has a C15 door to the chancel with a four-centred head in a square frame, with panelled jambs and carved spandrels.

The tower arch opens through the W end of the N wall of the N aisle, and is of two orders, the outer with polygonal capitals and bases on rounded shafts, the inner with continuous ogee mouldings. The ground floor of the tower has a stone vault carried on angle shafts at the corners, except on the SW where there is a stair vice. The shafts have capitals with grotesque carved figures, and the vault has panelled wall and diagonal ribs, with moulded intermediate ribs. There is a large circular opening for the bell ropes in the centre.

PRINCIPAL FIXTURES:
The church was largely refitted in the C19, but retains a few earlier fittings. There is a C13 double piscina in the E wall of the S chapel, similar to, and contemporary with, the arcade. C15 Purbeck marble font, octagonal with a buttressed stem and carved, panelled bowl. A C17 hourglass stands in the nave. The reredos and low chancel screen are 1878, the nave seating is of 1856 and has doors and poppyheads. A few fragments of C15 glass in the S chapel. Some good C19 glass including E window of 1874 by Heaton, Butler and Bayne.

Monuments: There are many good monuments. Brasses include a group for members of the Browne family, benefactors of the church, including William and Margaret Browne, both d.1489; Alice Bredmeydew (Browne), d. 1491; John Browne the younger, d. 1475/6 and his wife Margaret; and John Browne the Elder, d.1460 and Margery his wife. There are many good C18 and C19 wall tablets and some floor slabs.

SUBSIDIARY FEATURES:
Four iron gates in the churchyard of c.1800.

HISTORY:
All Saints was included in the Domesday book of 1086 under the entry for Portland, an alternative name for Stamford. Another three churches are mentioned, and a further seven are also known to have existed by that date. Such a large number of churches was typical of a prosperous Anglo-Saxon town. All Saints probably began as a detached part of the mother parish of St Peter's, but St Peter's was subsequently closed and amalgamated with All Saints in the C16. No Anglo-Saxon masonry, and only a fragment of C12 work, survives, but the irregular plan suggests that the church was rebuilt around an older core. The rich rebuilding of the C13 reflects the phenomenal prosperity of the town in that period, when the area was made rich by fen drainage and wool. Stamford was sacked and burned by the Lancastrian forces in 1461, and the complete rebuilding of the upper parts of All Saints suggests that it was badly damaged at that time. The C15 work on All Saints was largely paid for by William and John Browne, wealthy Stamford wool merchants and members of the Staple of Calais. The antiquarian William Stukely was vicar here from 1730-47 and published his important works on Stonehenge and Avebury during that period.

REASONS FOR DESIGNATION:
The church of All Saints, Stamford is designated at Grade I for the following principal reasons:

* C13 and earlier town church, substantially rebuilt in the C15; the C13 work is unusually rich, especially the exterior blind arcading, an unusual feature in a parish church, and the late C15 work is of considerable inventiveness and interest in its use of architectural details such as battlements as ornament;
* The richly decorated C15 is an important landmark in Stamford, grouping with the town's other churches and spires;
* Excellent set of C15 and C16 brasses, including a group to members of the Browne family, benefactors of much of the C15 work;
* The antiquarian William Stukely was vicar from 1730-47 and published his important researches on Stonehenge and Avebury during that time.