A Grade I Listed Building in Little Ponton and Stroxton, Lincolnshire 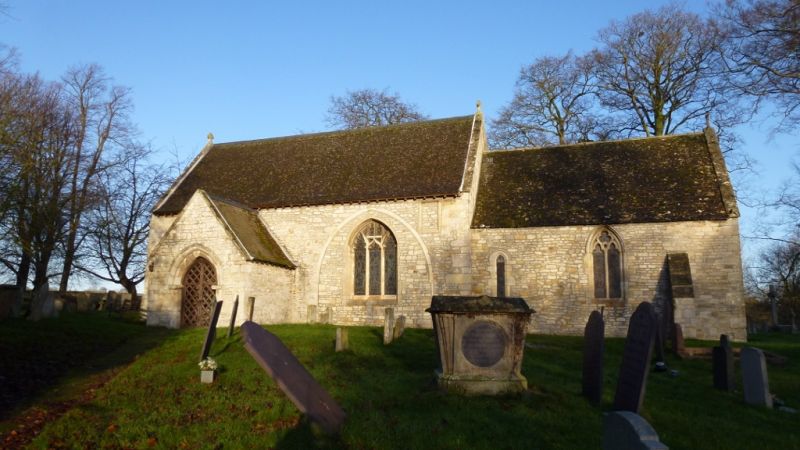 Parish church. Cll, C13, C14, C15, 1657, north aisle added 1856.
Coursed and squared limestone rubble, ashlar, plain tiled, slate
and stone slate roofs. Nave, chancel, south porch, north aisle
and vestry. The west end of the nave has a coursed limestone
rubble plinth and ashlar gable wall with chamfered offset. The
C19 2 light window has above a shouldered opening containing a
single bell. To either side and above are carved human head
corbels. In the gable is the raised inscription "Anno D 1657".
The squared limestone rubble and slate roofed north aisle has a
single C19 lancet and a pair of 2 light C19 windows with cusped
heads to the lights and trefoils over in late C13 style. The
vestry has a pair of lancets to the north side. The east window
is of 3 lights with shallow 4 centred head, in original C15
surround with hood mould and human head label stops, but with C19
tracery. Above are 2 trefoil heads and pierced roundel under a
pointed hood mould. The chancel in coursed limestone rubble with
stone slate roof has a single late C13 2 light window with cusped
heads to the lights and trefoil over, and a single plain lancet.
The south wall of the plain tiled nave has a single blocked
pointedarch to a former south aisle with an inserted C15 3 light
window, largely recut C19. Above the blocking to the east a
blank rectangular opening. Beyond the porch the rebuilding in
ashlar of the west end can be clearly seen, and a C17 2 light
cross mullioned window has cusped heads to the transoms and
chamfered mullions. The gabled south porch has a double
chamfered pointed opening with reset C12 imposts, and side
benches. The early C14 inner doorway has roll moulded pointed
surround, hood mould with human head stops. Above the door a 2
light pointed headed window. Interior. C19. 3 bay north arcade
with double chamfered round arches, circular piers and responds.
Blocked C14 single bay south chapel arch, recut C19. Mid Cll
chancel arch with low roll moulded rounded arch, square cut
responds with angle shafts having crudely carved decorated
capitals with scrolls and roll moulded run out imposts. From
north aisle to vestry a C19 archway. In the chancel a C19
archway to organ chamber, a pointed headed aumbry and piscina
with trefoil head in south wall. On the west wall a C14
octagonal statue bracket with pendant finial. The C19 nave roof
is supported on re-used corbels. The south-westernmost one is a
re-used piece of Anglo Saxon interlace. Above the chancel arch
C19 painting onto the stonework. All fittings including the font
are C19. In the chancel 2 marble wall plaques. c.1740. To
members of the Daye family and 2 further early C19 plaques to the
Pennyman and Towne families. In the south wall of the chancel
is an inscribed stone slab to William Thorold, d.l725, and above
the Thorold coat of arms. Coat of arms and slab have stone
bolection mouldings. Little Ponton Hall was probably built for
this Thorold. This building is listed Grade I because of its
fine Saxo-Norman chancel arch.