A Grade I Listed Building in Great Ponton, Lincolnshire 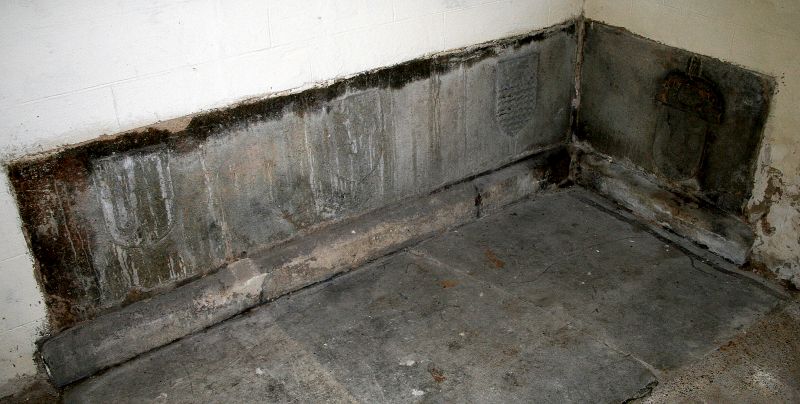 GREAT PONTON DALLYGATE
SK 93 SW
(north side)
4/96 Church of the
20.9.66 Holy Cross
G.V. I
Parish church. Late C13, C14, C15, 1519 west tower built by
Anthony Ellis, merchant of Staple of Calais. Ashlar with lead
roofs. Western tower, clerestoried nave, aisles, chancel, south
porch. 3 stage Somerset style tower with deep moulded plinth,
elaborate frieze of quatrefoils, mouchettes, triskeles, moulded
string courses, decorated battlemented parapet with further
frieze, 8 crocketed pinnacles, and 2 large grotesque chutes to
each face. Golden violin weather vane. Stepped corner
buttresses with ogee headed niches. To the belfry stage are
tall, large, 2 light louvred openings with transomes and cusped
heads to the lights. On the south side the inscription "Thynk
and thyanke God of all" under the arms of Anthony Ellis with hood
mould. To second stage a 3 light window with cusped heads to the
lights and deep bowtell moulded reveals. The C19 panelled and
traceried west door has 4 centred head set in deeply moulded
rectangular surround with carved spandrels. 4 light west window
as south side. The inscription is repeated twice on the west
side and once more on the north. The north aisle has moulded
parapet and a pointed doorway and 2 C16 3 light windows, one
partly recut C19. The clerestory has moulded parapet and 3 two
light early C15 windows with quatrefoils over. The chancel has
been reduced in length, with C15 east window of 3 cusped lights
and panel tracery. A matching 3 light window in south wall and a
4 centred low side window with 4 centred arch. C15 south aisle
has a 2 light window in the east wall with cusped heads and in
the south wall a C16 3 light window as the north side, with human
head set in the concave moulded hood. In the west wall is a 2
light window matching that to the east. Late C13 gabled south
porch with pointed single chamfered outer door with moulded
imposts, side benches. C16 inner doorway with concave moulded
surround with hood and human head label stops, C19 panelled and
blank traceried doors. Interior. 3 bay C16 nave arcades with
octagonal piers and responds, moulded capitals, double chamfered
pointed arches. C16 tall tower arch also has octagonal responds
with double concave chamfers and hood with angel stops. C13
rounded reveals to chancel arch, C16 octagonal capitals. The
tall double arches in the north wall of the chancel, one blocked,
are late C13. To the south of the chancel arch a C14 cusped ogee
head of doorway to rood loft turning stair. To the north aisle
at the east end a heavily moulded arch with octagonal corbels and
beyond in the north chapel a contemporary statue bracket. The
rear arches of the C16 chancel and north aisle windows have
concave chamfer mouldings. In the chancel north wall a pointed
and moulded aumbry with shelf and to the south a 4 centred arched
sedilia with beyond a matching piscina, all C16. In the south
wall of the south aisle a blocked 4 centred arched surround. All
fittings are C19 apart from the unusual square font and Royal
Arms to George III. Monuments. In the north chapel are the
reset low panels bearing heraldic devices of Anthony Ellis which,
together with the surround in the south aisle, may be the remains
of the benefactor's chest tomb. Anthony Ellis built the house,
now the former rectory, adjacent to the Church.