A Grade I Listed Building in Colsterworth, Lincolnshire 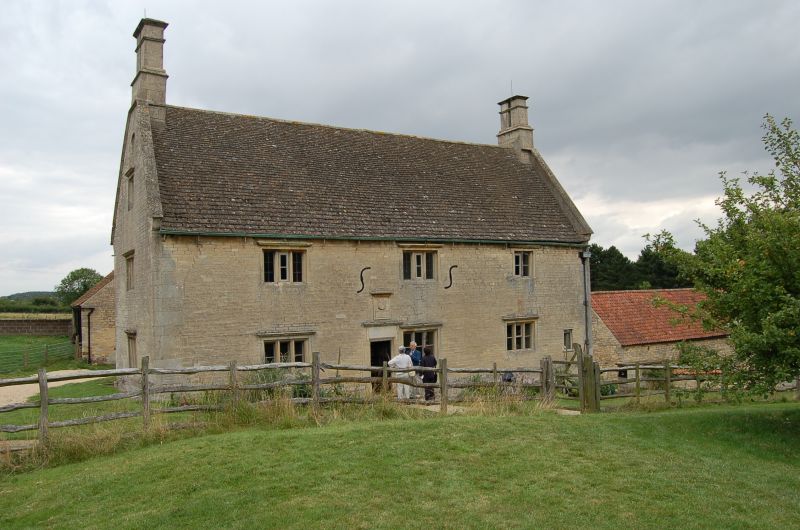 Farmhouse, the birth place of Sir Isaac Newton, now owned by the National Trust. Early C17 with early C18 alterations and addition. Coursed squared limestone rubble with ashlar quoins and dressings. Collyweston slate roof with raised stone coped gables and kneelers. Two ashlar gable stacks with moulded pairs of shafts, plinths and cornices. T-plan. Two storey with cellar and garret. Irregular five bay front having chamfered plinth and two three light cellar lights to left. Off-centre C17 plank and muntin door in moulded stone surround with cornice over. Above, a C18 stone plaque bears Newton's arms and inscription recording birth of Sir Isaac Newton, 25th December 1642. To left a single and to right 2 three light mullioned windows. Beyond to the right a small fireplace window. To first floor two three-light and a single two-light windows. In the left hand gable are single three-light windows to ground and first floors, a two-light window to the garret and above a blank oval recess. All windows have ovolo mullions and cornice over.

The wing at the rear retains the C17 single light stair windows and the original end of the stair turret is preserved in a line of quoins. The rear wing was extended early C18. Attached to the building is a later single storey wash house.

Interior. The old kitchen has moulded beam with large triangular stop and inglenook fireplace with moulded bressummer. Adjacent is a C18 panelled cupboard with splat baluster vents to the top. The internal walls are timber framed. Fully panelled C17 doors have contemporary chamfered and stopped wooden surrounds. The parlour has an angled stone fireplace with four centred head and cornice over. The front door has an original bar and slot. The staircase, which has been inserted into the central room is late C18 with column newel and stick balusters. To the first floor are four C17 doors with chamfered and stopped surrounds. The right hand room has an angled stone fireplace with eared surround and early C19 grate. Adjacent to the fireplace a stone lined recess. In the corner of the room is a small area partitioned off with moulded oak panelling and cornice. This is thought to be Newton's study. The main bedroom also has an angled fireplace with four centred surround containing C19 Bath grate. Over this is a C18 marble plaque recording the birth of Newton in the room on 25th December 1642. Adjacent is a small C17 wall safe with contemporary carved door. The attic floor retains the oak balustrade of the original early C17 staircase with turned bobbin balusters, deeply moulded handrail, square newel with large knops. All floors are lime ash and the roof is clasped purlin construction. In the plaster walls are a number of inscribed panels including geomtric motifs and a drawing of St. Wulfram's Church in Grantham. As well as being Sir Isaac Newton's birthplace, the house is historically important as the place where he discovered gravity and developed his theories regarding the refraction of light, during a year's break from Trinity College, Cambridge, to escape the plague.