A Grade I Listed Building in Grantham, Lincolnshire 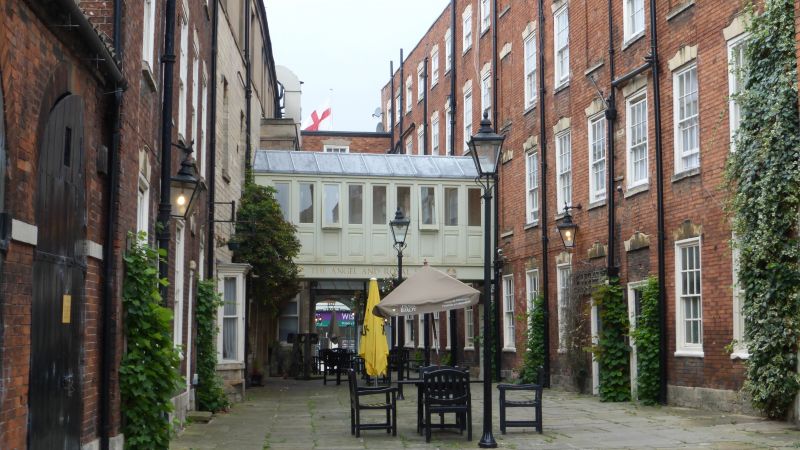 HIGH STREET
1.
1146
(East Side)
Angel and Royal Hotel
SK 9135 NW 8/49 8.5.50
I
2.
One of the few remaining English medieval inns. Late C14, 2-storey, stone,
stone slate roof, good medieval front to street with original window,
buttresses, panelled parapet, carriageway on right with well-carved demi-
angel corbel above supporting oriel window, the windows have been fitted
with modern sashes, On the back, on north side of yard, long range of
late C18 date. 4-storey, brick with square-headed windows with shaped
tone arches with keystones, glazing bars, parapet. 2 Rain water heads
dated 1776. The range on the south side of the yard has been rebuilt at
the west end, but east end is late C18, brick, 3-storey with parapet; 5
windows with flat stone arches with keys and shaped tops, flush frames,
glazing bars. Low stable range cast of south wing late C18; brick, pantile
roof; 4 arched windows with semi-circular heads. Note. Headstops of
carriage-arch (much weathered) said to be Edward III and Queen Philippa.
Interior has vaulted soffit to bay window on ground floor with carved boss
with Pelican. C18 staircase. King John said to have stayed here.
Richard III signed the death warrant of the Duke of Buckingham here.
The Angel was illustrated in Pugin's "Contrasts". Photographs in N.M.R.