A Grade I Listed Building in Thurlby, Lincolnshire 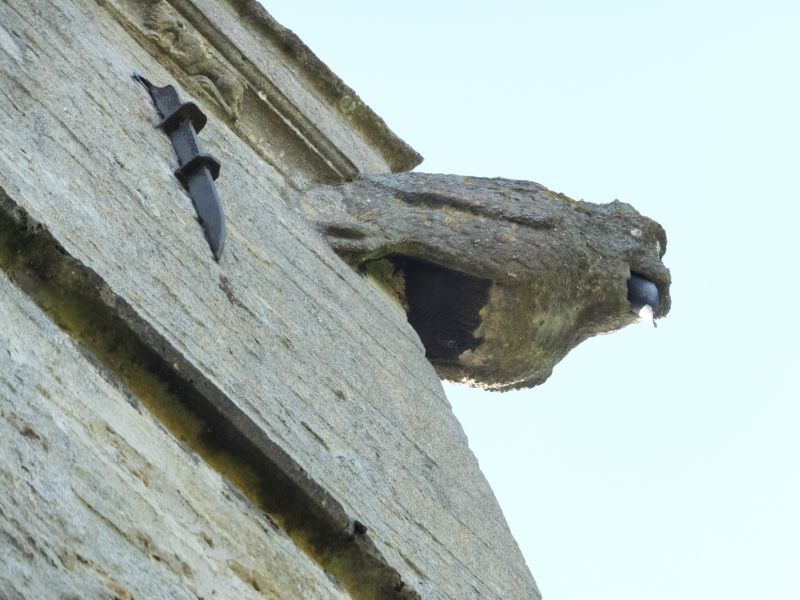 Parish church. Cll, C12, c.1200, early C13, C14, C15. Restored
1856. Coursed limestone rubble, ashlar quoins and dressings,
lead roofs. Western tower, clerestoried nave, aisles, transepts,
north and south chapels and porches, chancel. 3 stage tower with
long and short quoins to south west angle. Some herringbone work
to the middle stage. Plain parapet with fleuron frieze, recessed
C14 spire with 2 tiers of lucarnes. To the belfry stage are
paired 2 light C14 windows with cusped ogee heads. In the west
wall a trefoil headed lancet has to the left a C19 2 light window
and to the right a similar round headed light with above a
circular quatrefoil. The north aisle is embattled and has a
single plain light and beyond the porch are 2 C15 3 light
windows, one with panel tracery and a decorated buttress. The
gabled porch has a double chamfered outer arch with shafted
reveals, side benches and a chamfered inner order. In the
transept north wall is a further C15 triple light, and in the
north chapel are 2 C14 2 light windows with cambered heads and
cusped tracery and a pointed doorway with continuously moulded
pointed surround and to the east a similar 3 light window. The
nave clerestory has 4 paired C14 cusped lights. In the north
wall of the chancel is an early C13 lancet. The east wall has a
large 5 light window with panel tracery and wave moulded
surround. In the south wall are 2 further lancets and in the
south chapel are C15 lights, a paired one to the east and a
triple to the south, with a single early C13 lancet, a plain
light and above a 2 light transomed window. In the south
transept is a C15 3 light window to the gable, with 2 further
similar windows in the south aisle wall and a plain light beyond
the porch. The gabled C13 south porch has a continuously moulded
outer arch with flanking stepped buttresses and above a trefoil
headed niche. The inner door is late C12, stepped orders and
nook shafts. Interior. 4 bay late C12 nave arcades having round
piers scalloped and octagonal capitals, chamfered and stepped
arches. Tower arch originally Cll with chamfered imposts but
late in C12 a chamfered and stepped smaller arch was inserted
with shafted reveals, that to the south with a collar. Above an
offset and blocked Cll triangular headed doorway. C16 tie beam
roof with diagonal braces to the wall posts and through purlins.
Double chamfered C13 chancel arch with annular responds and
capitals, and to the north a pointed doorway to the rood loft.
The transepts have continuous shafted arcades to blank niches in
the west walls, pointed and chamfered to the south and trefoiled
to the north. In the north transept east wall a round headed
roll moulded blank arched recess, and to the south a similar
pointed archway with beyond a trefoil headed piscina. Also in
the transepts are double chamfered round arches into eastern
chapels. In the chancel side walls are double chamfered round
arches into the flanking chapels. In the south wall is a late
C12 dogtoothed sedilia, with beyond a pointed arch and a piscina
with moulded trefoil head and paired side shafts. In the north
wall is an aumbry and to north and south are squints to the altar
from the side chapels. In the north chapel is a chamfered
pointed arched piscina adapted as a squint and in the east wall a
second piscina with moulded pointed surround. In the south
chapel evidence of a possible Anchorite's cell is provided by a
mullioned and transomed window at first floor level. C15 stained
glass in south transept south window. C19 glass - one by
Baillie. Fittings. 2 sets of fine C17 altar rails, in the
chancel with turned vasiform balusters and knopped newels, in the
north chapel also, turned with bobbin stems. C15 oak parclose
screen to south chapel having moulded principles and pierced
cusped panel tracery to the lights. C12 tub font with octagonal
shaft and ribbed sides terminating in anthropomorphic capitals.
Medieval ladder in tower. Monuments. In the chancel south wall
a small slate wall plaque to James Trollope, d.1709, inscription
panel has cornice supported on composite capitals with side
scrolls. Above a scrolled escutcheon.