A Grade I Listed Building in Deeping Saint James, Lincolnshire 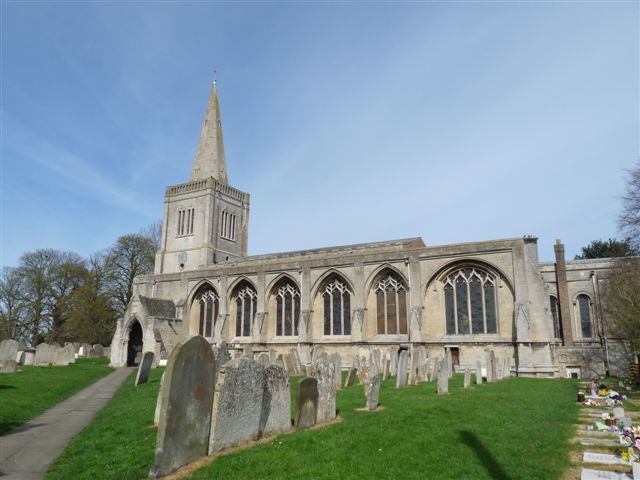 Former Benedictine Priory, now Parish church, founded from
Thorney Abbey in 1139, C13, C14, C15, c.1730, 1819, 1830.
Ashlar, coursed squared limestone rubble, Collyweston slate.
Western tower, clerestoried nave, south aisle, porch, chancel.
Tower of c.1730 altered in 1819, of 3 stages, in ashlar, with
moulded plinth and string courses, clasping angle buttresses, and
pierced arched balustrade. Recessed spire with lower 2 light
lucarnes and similar upper single light lucarnes, on the
principal sides. The belfry stage has 2 pairs of semi-circular
headed lights, with stepped keyblocks. On the south side a semi-
circular headed door with moulded imposts having stepped and
fluted keyblocks. In the second stage a single circular opening
and octagonal slate clock face. Beneath the parapet is inscribed
"TJ 1819". In the west side is a 3 light window, with semi-
circular heads to the lights and a keyblock to the over arch. On
the north wall of the nave a late C12 string course with zigzag
and chevron moulding marks the outer wall of the original church.
One C14 window of 3 lights was partly blocked when massive
stepped buttresses were added at the time the 3 large 3 light
windows were inserted, all with panel tracery. The north wall of
the chancel has 2 pairs of C14 cusped ogee lights and a doorway
with ogee head and hood with floriate knop. The chancel east
window is of 3 lights with cusped ogee heads. On the south side
is a 3 light C14 window with cusped ogee heads to the lights and
flat hood and 2 early C13 single lights with rounded heads and
shafts. To the east wall of the south aisle a pair of early C14
3 light windows with cusped ogee and trilobe heads and geometric
heads. On the south side of the nave is a 4 light window under a
wide moulded round arch and 5 pointed C15 3 light windows, all
having cusped ogee tracery. They are separated by pilasters with
gabled bases. In the west wall is a further C14 3 light window
with flowing tracery. The gabled south porch, early C13, has
steeply pointed outer doorway with clustered shafted reveals,
annular capitals, moulded head, dogtooth hood and beast head
terminals. Above the doorway is a C18 pedimented sundial. Side
benches. C14 inner door with continuously moulded surround and
hood. Over the door a Roccoco wall slab to Ann Buck, d.1752.
Interior. 7 bay south arcade, late C12, with quatrefoil piers
with keeled shafts to the angles, square abaci, plain capitals
apart from the 2 pelleted jewelled cushion capitals to the west.
Deeply rolled and moulded semi-circular arches and hoods. At 2
points are the remains of what appear to be the springing of
transverse arches. Above is a triforium of 13 bays having keeled
half shafts and moulded pointed heads. In the alternating bays
are single clerestory lancets. On the north side is a single
contemporary blocked arch. The 3 C15 north nave windows have
rounded rear C13 arches with angle shafts. At the west end of
the nave is a C18 rounded doorway with above a contemporary
window. The tie beam of the nave roof is dated 1830. In the
south aisle the corbel table of the mid C12 nave can be seen.
At the east end of the south aisle is a late C13 cusped trefoil
headed piscina and an aumbry. In the east wall a further pointed
headed piscina and an early C13 aumbry with hobnail hood in north
wall.. In the chancel south wall are 6 chamfered and rounded
arches, springing from annular corbels with conical bases
probably sedilia. Beyond is an early C13 double piscina, with
mid shaft and a Tudor arched doorway. Above are 3 fine early C13
rear arches with clustered shafts to the reveals, dogtoothing and
stiff leaf capitals, all with elaborately moulded arches.
Fittings. Large early C12 tub font with intersecting blank
arcading to the sides, with fine C18 inlaid octagonal cover with
contemporary wrought iron suspension chain. C18 hud or graveside
shelter with shaped roof and semi-circular arched opening with
impost and fluted keyblock. Monuments. In the chancel an early
C13 recumbent effigy of a knight having dogtoothing to the sides,
and a worn C14 coped effigy depicting a recumbent figure beneath
a crocketed and pinnacled canopy, with decorative coverlet, feet
resting on an animal. In the south aisle are 2 late C18 wall
plaques.