A Grade I Listed Building in Little Bytham, Lincolnshire 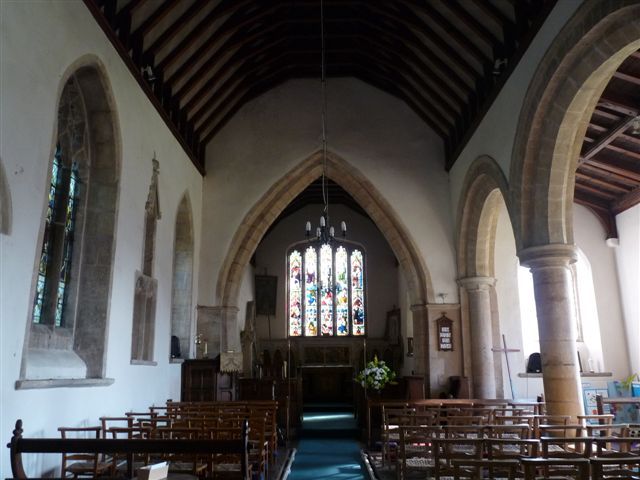 Parish church. C10, C12, C13, C14, C15, 1590, 1875. Coursed
limestone rubble with ashlar quoins and dressings, Collyweston
slate roofs. Western tower, nave, south aisle and porch,
chancel. The early C13 3 stage tower has an offset to belfry
stage and C15 embattled parapet, with pinnacles, frieze and
gargoyles, with C14 recessed spire having 4 gabled 2 light
lucarnes to lower stage and above similar single lights. In the
west wall single lancets to the lower stages and to the belfry
paired lights having octagonal shafts with stiff leaf capitals
and moulded round arched surround. In the north nave wall a late
C12 door with angle shafts, roll moulded opening with dogtooth
and continuously moulded lozenge head with dogtoothed hood
terminating in beasts' heads. Above, a reset stone with dancing
human figure. Otherwise there are 2 early C15 3 light windows
with cusped heads and panel tracery, and to the east a similar 2
light window. The C16 chancel east window is of 5 tall lights
with concave chamfered 4 centred arched surround. The chancel
south wall has an early C12 doorway with roll moulded surround,
fillets and an outer flat order of drip carved ornament. The
tympanum has low relief billet moulding, further chip carving and
at the centre a deep circular recess flanked by roundels
containing carvings of birds. The recess reputedly contained a
relic of St. Medard to whom the church is dedicated.
Immediately to the west is a 2 light C13 squint. The south
eastern nave quoin is C10 and of long and short work. The late
C13 east window to south aisle has intersecting tracery with
moulded surround and hood and in the south wall are 3 C13 3 light
windows with triangular moulded heads and hoods. The gabled
early C13 south porch has rounded reveals to the outer doorway
with collared shafts, annular capitals supporting a single
chamfered arch. The inner moulded doorway is C15. Interior.
The C12 3 bay south arcade has circular shafts, annular capitals,
2 with hobnail decoration, supporting single chamfered and
stepped arches. The C12 tower arch has plain imposts and
chamfered hood, terminating in beast heads. Above a round headed
doorway. In the north wall of the nave is a pair of C13 niches
with trilobed heads, surmounted by a further niche having an
elaborately crocketed and floriated C14 gabled canopy. In the
south aisle is a C13 piscina with side shafts and moulded trefoil
head. C13 chancel arch. Single chamfered order, octagonal
responds. In the chancel north wall a handsome early C14
canopied tomb recess with moulded arch, ballflower gable with
crockets, flanked by crocketed gabled pinnacles with human heads.
Late C19 double piscina in the south wall and behind the altar a
contemporary reredos having central painted panel in ashlar
frame. Fittings. 4 C14 bench ends, 2 with poppyheads. C14 font
with octagonal bowl and shaft, with sacred monogram painted onto
it. Stone base of pulpit is dated 1590 and inscribed "Orate et
Arate" and "Pray and Plough". All other fittings are C19.