Roman Catholic Church of Our Lady of Mount Carmel 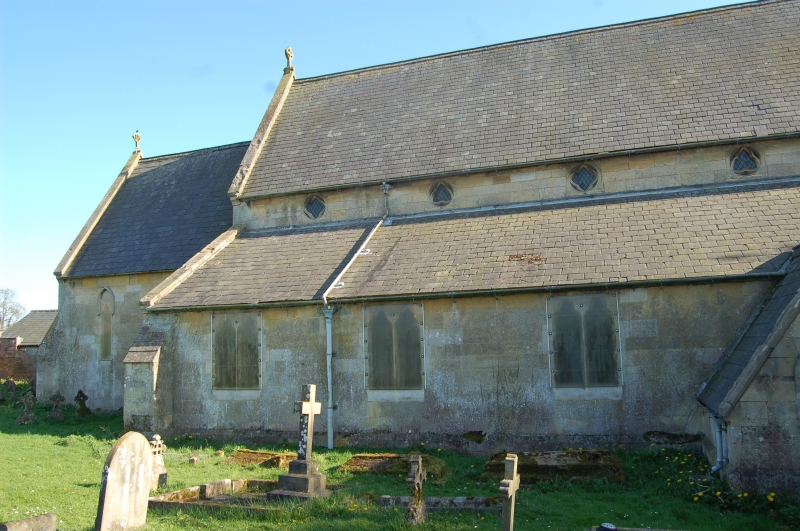 12/89 Roman Catholic
Church of Our Lady
of Mount Carmel

Roman Catholic Church. 1855-6. In c.1300 style. Ashlar with
stone coped slate roofs. Nave with clerestory and western
bellcote, chancel, vestry, north porch and aisle. The west end
has 2 stepped buttresses and 2 string courses. Central shaped
and gabled statue niche, flanked by single tall trefoil headed
lancets with trefoils over. Above a further trefoil and to right
of gable a double bellcote with mid wall shafts, pointed heads
and pierced sexfoil to gable. In the west wall of the north
aisle a 2 light window. Gabled north porch has a double
chamfered outer door with moulded hood. The inner doorway is
single chamfered with hood and floriate stops. In the north wall
4 pairs of 2 light windows and to the clerestory alternating
trefoil and quatrefoil lights in circular surrounds. The east
aisle wall has further 2 light window with trefoil over and in
the chancel north wall are 2 single lights also with trefoils.
The east window is of 3 lights with cusped heads and quatrefoil
over with moulded hood and human head stops. On the south side
of the chancel a single storey link connects the former
presbytery with the church, in the west wall 2 pairs of
shouldered windows. The south nave wall has 5 pairs of trefoil
lights with cusped quatrefoils over, separated by stepped
buttresses. Interior. 4 bay north arcade with pointed arches,
round columns and floriate annular capitals. Chancel arch double
chamfered with octagonal imposts, foliate capitals, moulded hood
with angel stops. In the north aisle a trefoil headed piscina
and at the west end of the nave a timber gallery on octagonal
posts. Panelled and painted ceilings. Fittings all C19 with
fine brass telescopic altar rails. In the Sanctuary an encaustic
tiled floor, stone altar with sacred monograms, and gabled pyx.
In the north aisle substantial low wooden screen with paired
pierced traceried arches and moulded cornice. The stone altar
has panels containing carvings of angels holding scrolls, with
above a statue of the Blessed Virgin Mary. Complete collection
of contemporary stained glass. The Catholic Church was moved
from the Irnham Estate to Corby when the Cliffords, a Catholic
family, sold the Estate to the Protestant Woodhouses in mid C19.