Church of St Thomas a Becket

A Grade I Listed Building in Bitchfield and Bassingthorpe, Lincolnshire 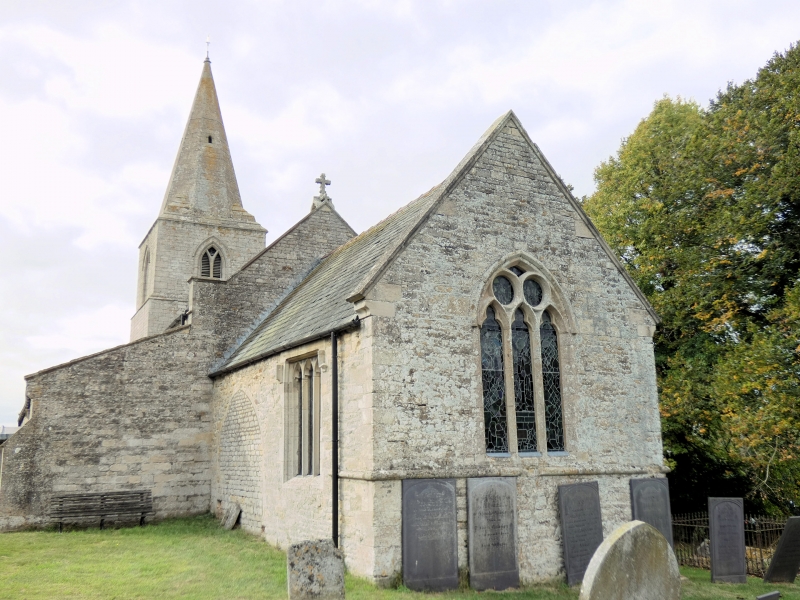 Parish church. Mid C12, late C12, late C13, C14, C15, C16, C17,
C19. Ashlar, squared and coursed limestone rubble, ashlar quoins
and dressings. Stone coped slated roofs. Western tower, nave,
south aisle, chancel, south porch. 3 stage late C13 tower has
plinth, 2 chamfered offsets and octagonal ashlar broach spire
with tiny lucarnes to each principal direction. The C13 2 light
belfry openings have Y tracery, chamfered surrounds and hood
moulds. The west window is a single lancet with hood mould. To
the second stage a small rectangular light. The north wall of
the nave has a battlemented parapet with corner pinnacles. A
wide buttress against junction with the tower and 2 further
stepped buttresses, behind the centre one the head of a blocked
door can be seen (possibly to the now vanished Coney chapel). The
eastern part is in ashlar. 3 light C15 window with panel tracery
and pointed surround and C19 fixed light in square opening.
Further east a large 4 light C16 window with cavetto mullions and
concave chamfered rectangular surround. In the C13 chancel a
moulded string, a single lancet and C16 single light with transom
and chamfered surround. In the east wall a 3 light early C14
geometrical window with trilobe heads and roundels over. In the
south wall a 3 light C15 window with cinquefoil heads to the
lights and flat headed moulded surround, also a blocked archway
to a vanished south chapel. The south wall of the nave has a
blocked rectangular opening at low level and a wide 4 light C16
window with chamfered mullions and moulded surround with cornice
over. Beyond the porch a C16 single light with moulded surround
and hood mould. C16 gabled ashlar porch having Tudor arched
opening with concave chamfer and hood mould. Side benches. Late
C13 inner doorway, chamfered and pointed with hood. Interior. 3
bay late C12 south arcade with circular piers and responds,
waterleaf capitals, octagonal abaci and double chamfered round
arches with hobnail hoods. Late C13 tower arch, octagonal
reveals and capitals, double chamfered arch. Wide mid C12
chancel arch having round shafted reveals, cushion capitals with
floriate roundels in low relief, square reeded abaci, round inner
order, a chamfer, a step and a billet moulded hood. Late C13
trefoil headed piscina to south aisle with a reset C12 gravestone
having low relief incised cross to the back wall. Above the
south doorway 2 reset late C17 stones recording churchwardens in
1675 and 1699. In the chancel a blocked early C14 double
chamfered archway to a vanished chapel having octagonal responds.
Beyond is a reset double piscina and on the north side a square
aumbry and a further blocked opening. All fittings are C19.
Octagonal font with panelled traceried sides, recut in C19. The
Coney chapel, housing the monuments to the family of Thomas Coney
(builder of the adjacent house) was still in being at the end of
the C18, but all traces have now vanished.