A Grade II* Listed Building in Strubby with Woodthorpe, Lincolnshire 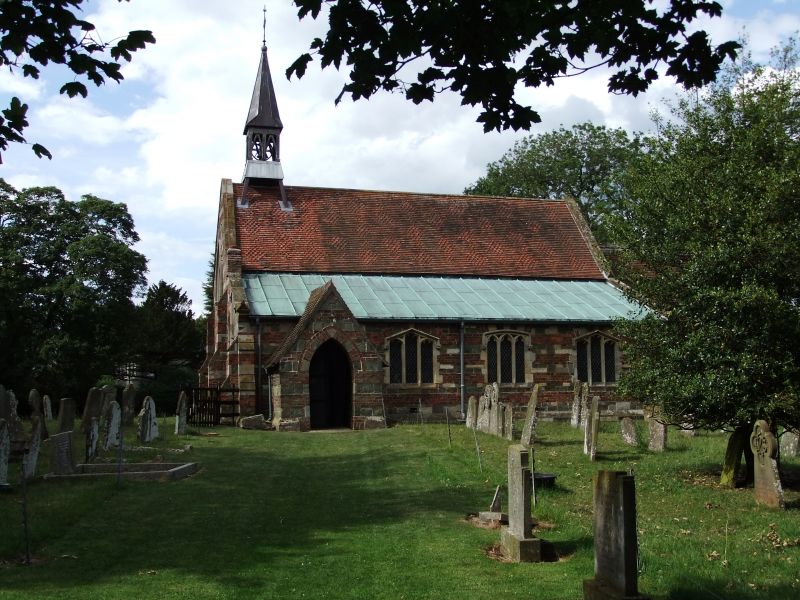 TF 48 SE STRUBBY WITH WOODTHORPE CHURCH LANE
(east side)
5/36 Church of
9.3.67 St. Oswald
G.V. II*
Parish church. c.1300, C15, 1857 by Maughan and Fowler with
chancel of 1874 by Ewan Christian. Red brick and banded
greenstone, ashlar dressings, with plain and decorative tiled
roofs. Nave with western bellcote, south aisle and porch,
chancel, vestry. All windows have cusped ogee heads, panel
tracery and chamfered surrounds with hoods. In the west wall of
the south aisle is a 2 light window and in the nave one of 3
lights. Openwork timber bellcote with facetted copper spirelet.
In the north wall are 4 two light windows and in the gabled
vestry a lancet. The east chancel window is 3 lights with
reticulated tracery. In the south wall is a 2 light window and a
further c.1300 2 light window with cinquefoil in the east wall of
the south aisle. In the aisle south wall are 3 three light
windows with triangular heads. The gabled south porch has a
pointed outer arch and a continuously moulded and hooded inner
doorway. Interior. The C15 4 bay south arcade has octagonal
piers and double chamfered arches. The chancel arch is C19.
All fittings are C19 but the octagonal font is C15 with panels of
trqacery patterns. Monuments. In the chancel is an early C14
headless effigy of a civilian, under a nodding ogee arch. In
the nave is a small tablet to William Ballett d.1648 aged 99, of
Woodthorpe Hall. He and his 2 wives are depicted in Elizabethan
dress, kneeling opposite each other across a prayer desk. Above
the parents against the back wall of the tablet are the figures
of his children.