A Grade I Listed Building in Yarburgh, Lincolnshire 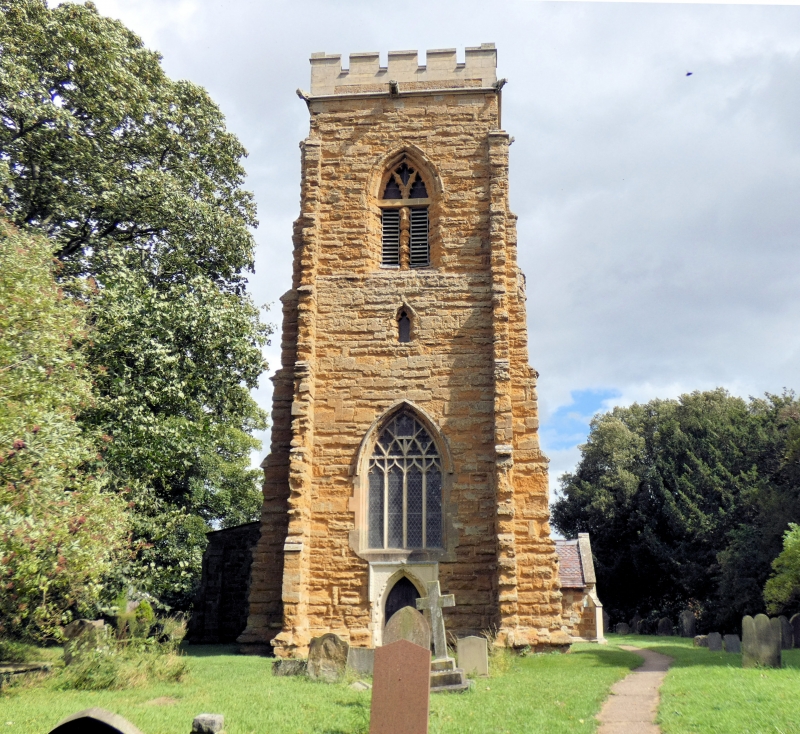 Parish church, now closed. C14, largely rebuilt 1405, after a
fire, restoration of 1855. Squared ironstone and chalk rubble
with limestone ashlar dressings, lead and plain, tiled roofs,
with fishscale decorative bands, tiled roofs. Western tower,
nave with clerestory, chancel, south porch, vestry, north aisle.
Tower of ironstone of 3 stages, with stepped corner buttresses,
moulded plinth, offset to belfry stage and battlemented parapet.
On south side is a projecting stair with verical slit lights,
and all sides except the east are single trefoil headed lights to
middle stage. To all sides are paired louvred lights to belfry
with double chamfered pointed surrounds and embattled transomes
with cusped heads and quatrefoils above. The west doorway has a
deeply moulded surround with outer concave chamfered order
containing running tendril design with leaves, fruit and a
Pelican in her Piety. The outer edge of the same order has a
worn Lombardic inscription "Wo so looks thys work upon, pray for
all that yt begun". In the spandrels are low relief carvings of
a coat of arms, Paschal banner and the Fall of Man. The square
hood is enriched with fleurons and retains one human figure label
stop. Above is a large C15 4 light window, cusped ogee heads to
the lights, panel tracery, moulded surround and hood. The west
window of the north aisle is C15, of 2 lights with cusped heads,
panel tracery and concave chamfered surround. In the north wall
is a blocked pointed doorway with moulded hood and human head
stops, beyond are 3 C15 windows of 3 lights, cusped ogee heads,
panel tracery, chamfered surrounds. The chancel is rendered and
has a tiled roof, in the north wall is a C15 2 light window,
cusped heads to the lights and moulded hood. Beyond is a pointed
window with hollow moulded hood, remade in C19 to form a niche
for missing sculpture. The chancel east window is C19 of 3
lights with panel tracery. The C19 vestry has a C15 style 2 light
window. On the south side may be seen the blocked C14 4 bay
arcade bearing extensive fire reddening. Set in the blocking are
3 C19 windows in perpendicular style. The C15 clerestory matches
that to the north and has 4 two light windows, trilobe heads and
square chamfered surrounds. The C19 gabled porch has a
continuously chamfered outer doorway. The C14 inner doorway is
in a continuously moulded surround of 4 orders and presumably
reset. Interior. 4 bay C15 north arcade with octagonal piers
and responds, double chamfered arches. Above the arcade are C19
human heads. The tower arch is C14 triple chamfered and dies
into the reveals. The chancel arch is double chamfered and also
dies into the reveals. In the east wall of the aisle is a C14
pillar piscina having cusped and crocketed ogee hood with finial.
All remaining fittings are C19 except for the plain C14 octagonal
font and the C15 tower screen, probably repositioned from the
chancel. It has a central depressed ogee arch with panel
tracery, cusped ogee headed side lights and brattished top and
mid rails.