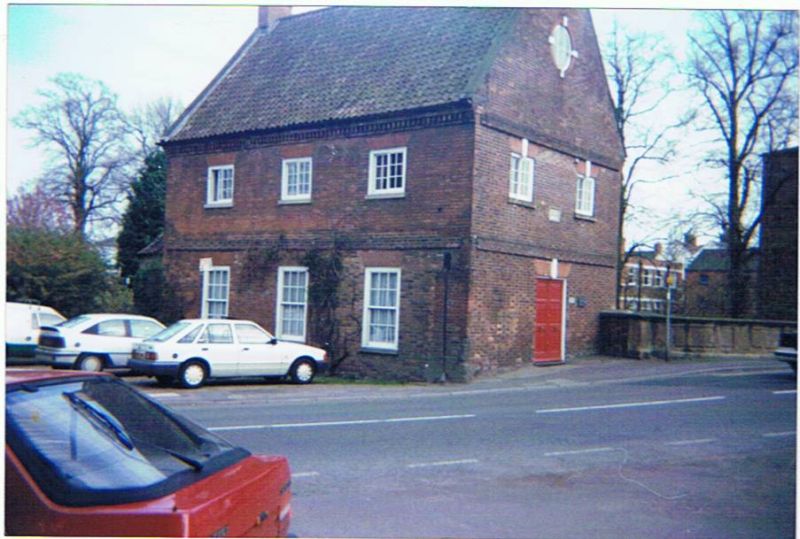 The Old Mill was originally a water-powered mill, drawing its water directly from the River Ludd. It underwent restoration and conversion to a dwelling between 1973 and 1976.

Former water-powered mill, dated 1755, restored and converted to a dwelling in 1973-6.
MATERIALS: constructed of red brick with vitrified headers used for decorative effect. The roof is covered with clay pantiles.

PLAN: the building is linear in form, aligned parallel to the mill race.

EXTERIOR: of two storeys with attics and of three bays, with a lower single-bay range at the east end, of single-storey and attic form. Below the ground floor to the house is a basement area, formerly enclosed within a lean-to wheelhouse, in which the main drive from the mill's water wheel was located. The west gable faces Bridge Street and has a central double doorway with three-panel doors and a flat, rubbed brick, arched head with a painted keystone. There are wide storey bands to the first and attic floor levels, and two first-floor windows below flat, rubbed brick heads with keystones. The window frames are two-light, horizontal glazing-bar sashes. Within the gable apex is a large keyed oculus. Above the doorway is a rectangular plaque which reads 'Francis Julien, Engineer 1755' A smaller plaque to the right of the doorway reads 'Reconstructed 1973-76 by Louth Civic Trust Ltd. for the people of Louth. Architects :-Wm Saunders and Partners.' The north elevation is of three bays, with six-over-six pane, vertical sash windows to the ground floor, and two-light horizontal, glazing-bar sashes to the upper floor. There is a wide storey band above the ground-floor windows. The south elevation has three, two-light horizontal sashes to the upper floor below a modillioned eaves. Below cill level is a storey band. The lower floor has three, tall, six- over-six pane sashes. These windows do not appear on the depiction of the mill in William Brown's ' Panorama' of c.1853, being located in the area within the former wheel house. The basement area below the ground floor level has a blocked, arched opening at its base which may have housed the wheel shaft.

INTERIOR: altered to form residential accommodation. This is presumed to have taken place at the time of, or shortly after, the reconstruction of the mill between 1973 and 1976. (Not inspected 2013)

FIXTURES AND FITTINGS: there is a section of the shuttle mechanism, used to control the flow of water into the wheel house, at the south-west corner of the building. No other fixtures and fittings related to the building's use as a water mill are known to survive.

The town of Louth in Lincolnshire, often referred to as the ‘Capital of the Wolds’, has Saxon origins, and at the time of the Domesday survey was one of Lincolnshire’s 7 market towns, with a population of 600. Its medieval core is still discernable in the town’s street pattern, and was bounded by the River Lud, the streets of Gospelgate and Kidgate to the south and Church Street to the east. Street names including the suffix ‘gate’ abound in the medieval core, which is signed from a great distance in every direction by the spire of the St James Church, completed in 1505, the tallest such spire of any parish church in England. Louth’s medieval prosperity was derived from exporting wool and grain, and its magnificent parish church is testimony to the wealth generated by agriculture in the region, and by Louth’s relative proximity to the east coast.
The town’s population was reduced by three-quarters by outbreaks of plague in the 1630s, and by the early C18 economic prosperity had understandably waned considerably. However, the opening of the Louth-Tetney canal in 1770 heralded a new era of prosperity, and the growth of industries related not only to the region’s agriculture such as malting and grain processing, but also activities such as tanning, boatbuilding and warehousing. Much of this development took place around the canal terminus at Riverhead, and the growth of the town eastwards, along Eastgate James Street and Walkergate.

In 1848, the East Lincolnshire Railway came to Louth, extending trade and communication links beyond those of the canal, and further enhancing the town’s economic strength. An expanding population stimulated the development of terraced housing and villas, churches, chapels, schools and a range of public buildings all graphically captured in the remarkable ‘Louth Panorama’, a two-section painting by a local man, William Brown. The Panorama presents a view of the town from high in the spire of St James Church. It portrays Louth at the height of its development and prosperity, shortly after the arrival of the railway, set in its surrounding rural landscape, with the east coast seascape in the background. The structure of the town has changed remarkably little since the Panorama was created, and Louth has mercifully escaped the large-scale post-war redevelopment experienced by many communities in England. Louth remains a thriving historic market town with a high proportion of well-preserved C19 buildings.

The Old Mill on Bridge Street is dated 1755 and stands next to the crossing point on the River Ludd which carries the main north-south route through Louth. The former corn mill was previously known as St Mary’s Mill and Holland's Mill, and the said Mr Holland undertook the repair of the mill dam in 1824, being required to do so under the terms of the lease for the site originally granted to a former tenant in1653. No dam appears now to exist, but the documentary evidence suggests that the mill site is considerably older than the present building. The mill remained a water-powered site throughout the C19, but by 1920 milling had ceased, and the building was used as a garage until 1969. The building is clearly depicted in Brown’s mid-C19 Panorama, with a now-removed wheelhouse on the riverside elevation. Restoration of the mill was begun in 1973, and was completed in 1976, during which time the building was listed.

The Old Mill, Bridger Street, Louth, dated 1755, is listed at Grade II for the following principal reasons.
* Architectural interest: as a securely-dated mid C18 mill, which externally survives reasonably well
* Historic interest: the mill is the only historic mill structure in Louth which pre-dates the major period of industrial expansion associated with the opening of the Louth -Tetney canal in 1770;
* Group value: the former mill building is sited immediately adjacent to the listed bridge spanning the River Ludd which carries the principal approach to Louth from the north. The bridge structure incorporates elements of the water control mechanisms which regulated the flow of water to the mill.