A Grade I Listed Building in Great Limber, Lincolnshire 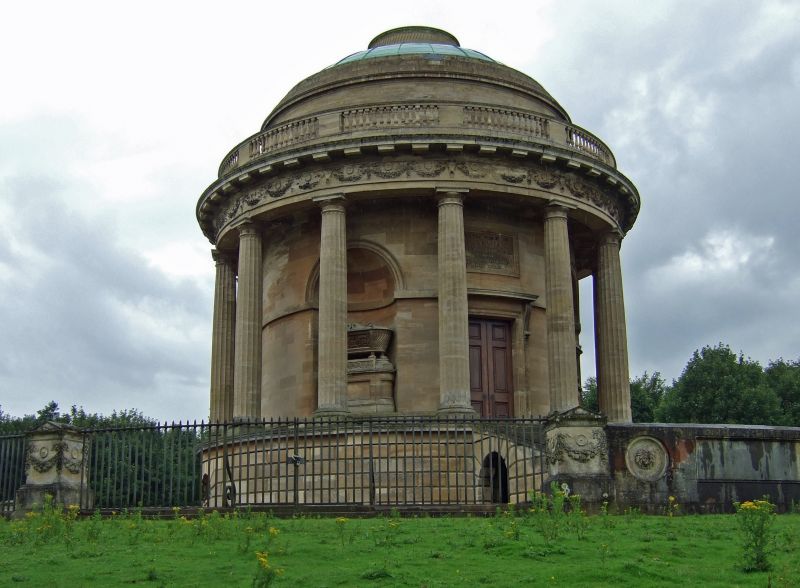 TA 10 NW GREAT LIMBER BROCKLESBY PARK
Mausoleum, wall and
5/104 screen (Mausoleum
25-10-51 formerly listed with
Brocklesby Hall in Brocklesby
G.V. Civil Parish)
I
Mausoleum, wall and screen, 1792, by James Wyatt. Ashlar,
copper dome, cast iron railings. The circular mausoleum stands
on a low mound (traditionally a Roman burial place) and is
surrounded by a low wall with railings. Moulded plinth,
rusticated basement with cornice containing tomb chamber which
has 3 round headed louvered openings with cast iron grilles and
reliefs of sarcophagi and wreaths beneath. Access to the tomb
chamber is afforded by a door set beneath the entrance platform,
and opposite this is a recess above which is inscribed , 'James
Wyatt Esq.r Arch.t'. Above are 12 fluted Roman Doric columns
with paterae in the necking. They support a frieze of swags,
paterae and bucrania, a dentillated cornice with, above,the great
copper dome surrounded by a balustrade. On the top of the dome
is an ashlar lantern, the sides of which are decorated with s-
shaped flutes. The columns screen the circular cella which has
a plinth and a plain string course. 4 hemispherical headed
niches each contain free standing sarcophagi on apsidal ended
panelled bases. The doorway on the north side is approached by
a shallow flight of steps above a rusticated ramp which divides 2
flanking flights. The 2 leaved panelled door with moulded
stone surround with a shallow cornice on scrolled brackets.
Above is a tablet inscribed 'To the memory of Sophia, the wife of
C. A. Pelham, who died Jan. XXV MDCCLXXXVI Aged XXXIII' with a
moulded stone surround. To either side of the door are single
hemispherical headed niches containing sarcophagi on panelled
apsidal ended bases. The sarcophagi have 2 scrolls above, s-
shaped flutes and a panel containing acanthus decoration, lions
feet and guilloche moulded panels. On the soffit between the
entablature and cella are square sunk panels containing paterae.
Inside, 8 marble Corinthian columns arranged in pairs support a
moulded entablature and a richly coffered domed roof, with at the
centre a glazed and painted lantern, the paintings by Francis
Eginton of ethereal angels. At the centre of the floor is a
white marble statue of Sophia carved by Joseph Nollekens. She
stands on a pedestal with s-shaped flutes. On a slate plinth on
a floor of patterned marble inlaid with brass and surrounded by
fine brass rails. There is a further outer frieze of Greek Key
ornament. In 3 recesses are tombs commemorating members of the
Pelham family. One to William Pelham d.1587 with a draped
mourning putto and an undraped female figure. A second to
Charles Pelham Esq., d.1763, with a sarcophagus and a female
mourning figure regarding his portrait. A third to Francis
Anderson Esq., d.1758, a sarcophagus with armorial and 2 mourning
putti, one holding a ring of Eternity. On a wall plaque to the
right of the door with semi circular pediment and scagliola work
in panels is a list of Pelhams deceased since 1786 and buried in
the mausoleum. The mausoleum is surrounded by a screen of
sturdy iron railings interrupted by 12 ashlar neo classical
sarcophagi, each with pediments, swags and rams heads.