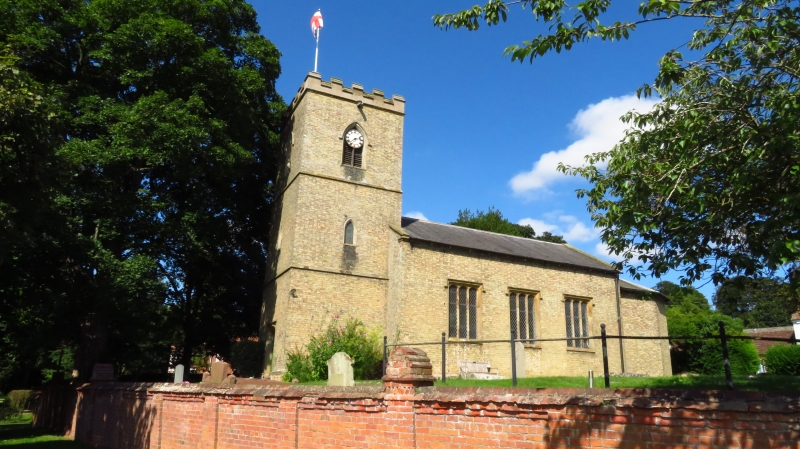 Parish Church: 1832, but base of tower is of stone and could be
Medieval. Yellow brick, ashlar dressings, slate roof with lead
dressings, stone coped gable to nave, hipped end to chancel.
Western tower, nave, chancel. 3 stage tower with plinth, 2
string courses, battlemented parapet. First stage has single
pointed light on the south side. Belfry stage has a double light
under a pointed arch, clock on south face. West side is as south
but no clock, and plank and muntin door under a Tudor style 4
centred arch with a narrow cornice. North side has a single
light in the first stage. North side of nave has three 3 light
windows with 4 centred arched heads to each light and a hood
mould. Plain moulded cornice. Chancel is splayed at the eastern
angles, and has a doorway in a Tudor style arch like the west
door. The east window is a 4 centred arch with hood mould, of 3
lights with reticulated tracery renewed in C20, South side of
nave matches the north. Interior has plain whitewashed walls
with a wooden ceiling. Western tower has a porch in the base
with a plain C19 stair to a gallery on the south side, the west
door is also in the Tudor style with 2 glazed lights and bordered
stained glass surround, 4 panels beneath. On nave walls are 3
lozenge shaped plaques bearing figures of saints. The west
gallery is of wood with rounded angles, standing on 4 octagonal
pillars, the front is panelled in the Tudor style, matching the
rest, and in the centre panel is an inscription in gold
lettering, "This loft was erected in the year MDCCCXXXII at Mrs.
Roadley's expense, John Feravy Church Warden". The chancel arch
is pointed with double splay, no imposts. There are 2 further
lozenge shaped panels in the chancel walls. Fittings: carved
by Vicar Townsend between 1845-1889. The pine pews all match with
roll moulded tops, pierced quatrefoils and trefoils. Monuments:
In the chancel at the east end are a pair of white marble tablets
on black marble backgrounds with sarcophagi, urns and scrolls.
On the north side to Richard Dixon Roadley, d.1826, and on the
south to Richard Roadley d.1825 and Ann Roadley d.l858. Both by
G. Earle of Hull. In the nave, marble tablet with Gothick stone
surround to John Frank d.1769. Stained glass in nave dated
1889, dedicated to Townsend, the Vicar who carved the fittings:
the glass in the top of the east window appears to be late C18.
The font is late C18, an octagonal bowl on an octagonal pedestal
with a square base.