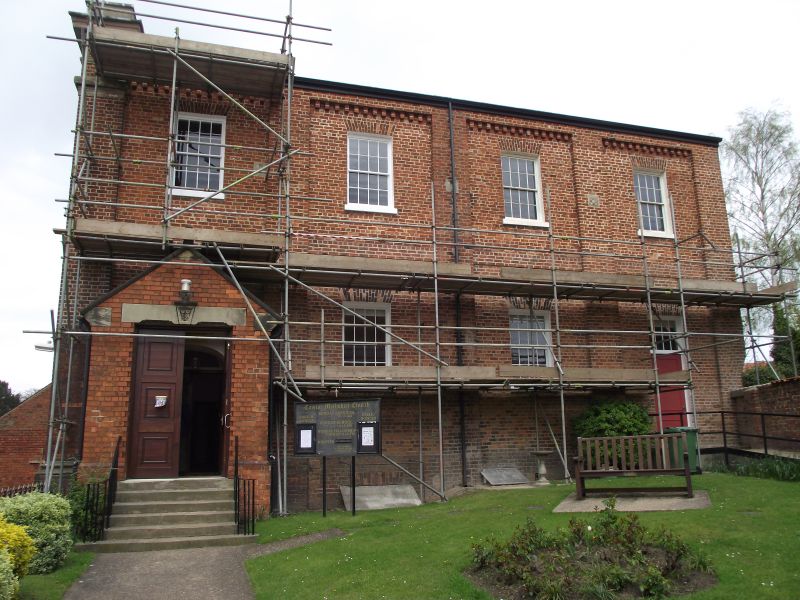 Chapel, circa 1840, red brick, ashlar dressings, slate roof with
2 wall stacks. Basement with 2 storey 3 bay front, deep plinth
upon which 4 pilaster rest which divide the facade into 3
irregular bays, the central bay being wider than the flankers.
The pilasters rise up to roll moulded capitals with a frieze and
a full stone lined pediment in the centre of which is a pierced
stone roundel. Second floor brick band. Basement has a central
plain door with 5 pane overlight flanked by single glazing bar
sashes having slightly segmental stone lintels. On the first
floor is a central triple window with moulded capitals and
arches, 5 panes with stained glass borders. Flanked by single
double windows in a similar but plainer style. The second floor
matches the first. Between the first and the second floors is a
stone tablet inscribed 'Wesleyan Chapel'. Right side has 4 bays
with pilasters, each panel. having dentillated cornice and first
floor band and containing single sashes at ground and first floor
levels having moulded brick heads, with gabled porch dated 1900
at left. Inside, a complete first floor gallery in the form of
a flattened oval, panelled wood front, the whole supported on
iron stanchions in the form of baseless round Tuscan columns.
Pews are original, but reader's desk is later. 2 staircases
outside the main hall have plain square section balusters,
curling handrails and open treads. Upstairs all is grained and
painted to resemble good deal; a complete set of box pews.
Ceiling has a decorative plaster rose at its centre with acanthus
leaves and round the margins of the ceiling is a pierced
decorative iron ventilator grille.