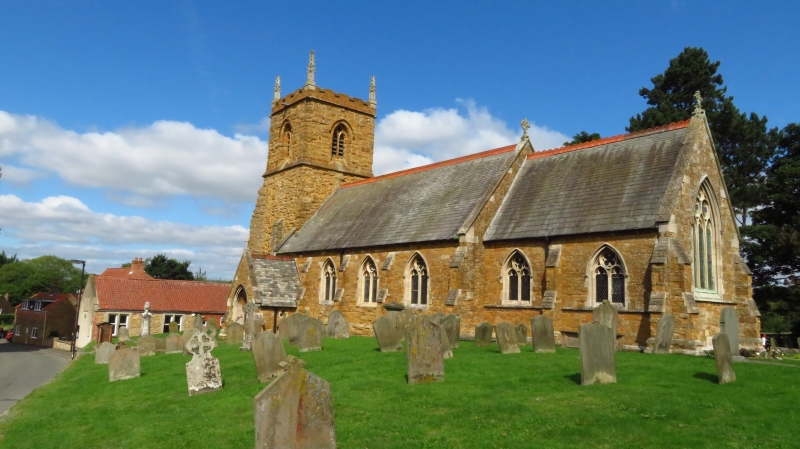 Parish Church, C11, C15, 1805 and 1874 restoration and rebuilding
by James Fowler of Louth; coursed ironstone rubble with ashlar
dressings and slate roofs, western tower, nave, chancel, south
porch, vestry. The 3-stage tower is in very weathered ironstone
of large irregularly shaped blocks, the lower two stages being
Saxo-Norman with a plinth and square section string course and
side alternate quoins which are largely concealed by later
buttresses of one and a half stages. The top stage was added
in C15 and has a plain parapet with C19 pinnacles in a decorated
style. On the south face is a small internally splayed light,
now almost concealed by a later buttress. The west doorway is
also Saxo-Norman and has square jambs, plain chamfered imposts, a
semi-circular arch with deep weathered hood mould bearing-traces
of incised ornament. The tympanum is pierced by a C20 circular
light and has C20 carving. The C20 door is glazed. Above the
door is a small round headed internally splayed window. The top
stage has a large clock with Roman numerals. The north face is
blank. The four belfry lights, one to each face, are C15 2-light
openings with cusped heads. The remainder of the church dates
from the 1874 rebuilding which follows an earlier rebuilding of
1805 although some masonry may be medieval. The Early English
style has been used with four two-light north windows, a 3 light
east window, five two-light south windows. On the north side is a
stepped chimney stack with circular chamfer moulded top.
Interior: The Saxo-Norman tower arch is tall and round headed
with square jambs and arch and chamfered imposts. One half of
the arch has a deep roll moulding the other half is plain. The
furnishings all date from the 1874 restoration. The chancel
roof is decorated with stencilled fleur de lys between the
rafters. In the nave and chancel is stained glass from 1874-
1900. The chancel floor is of Minton tiles. The stone reredos
and altar sculpture is of the Last Supper and contains the 10
Commandments and Creed. At west end is a Royal Coat of Arms.