A Grade I Listed Building in Osgodby, Lincolnshire 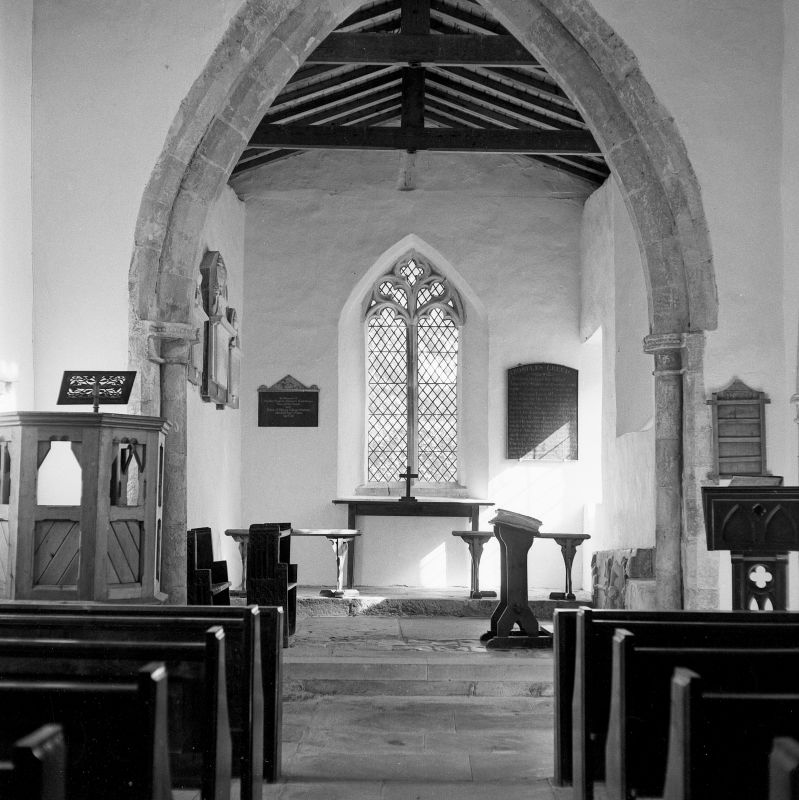 Parish Church now vested in redundant churches fund. Early C11,
C12,C13, C14, early C17; minor C19 repairs. Squared and coursed
ironstone rubble with some brick patching and plastered areas,
lead and pantile roofs. Western tower, nave with clerestorey,
south aisle and porch, chancel. The C13 tower is in three tapering
stages with base, two crudely cut string courses and slightly
overhanging lead roof. It has corner buttresses to 1st stage
only. On the south side is a single light to the 2nd stage with
flat head. All faces have C13 paired opening belfry lights with
pointed, almost triangular heads. The west side has a trefoil
headed light with pointed arch, to 1st stage. In the east side
of the tower, exposed above the nave roof, the earlier roof pitch
of the nave can be seen. As this is cut by the C13 string
course, it is likely, from other evidence seen elsewhere in the
church, that this represents the C11 Anglo-Saxon nave roof pitch.
Nave, chancel and aisle have pantile roofs. The north side of
the nave has three massive buttresses, the end ones of which may be
the remains of the demolished north aisle. The blocked arcade
of this aisle is visible, and in the easternmost blocking is a
reused C14 3-light window with reticulated tracery. The
northern clerestorey is blank. The chancel is in a very poor
ironstone rubble and the east end appears to have been slightly
lengthened. The east window is C14 2-light with curvilinear
tracery and to either side are carved heads, one with tiny arms
and hands. The chancel is much lower than the nave, and in the
east end of the nave, which is partly plastered, the earlier roof
pitch of the chancel can be seen. The south side has a plain
rectangular C17 altar window, a narrow early C13 lancet at high
level and a small C17 single light at low level. The south
aisle is more regularly coursed ironstone. The 2-light south
window is C14 with Y tracery restored in timber. The west
window is C14 2-light, restored in C19. The south porch doorway
is in situ although the arch over has been reset. The doorway is
early C13 with 3/4 engaged shafts and dog tooth moulding to
reveals with annular capitals and imposts with nail head
decoration. The porch has side stone benches. The south
doorway is C12 with plain imposts, and semi-circular head. The
door and its ironwork straps and hinges are of a similar date.
The south clerestorey is part plastered and has a pair of 2-light
early C17 windows with reveals, heads and mullions in brick.

INTERIOR: The C13 2-bay south arcade has an octagonal pier and
responds with double chamfered arches. The capital is plain,
but the eastern respond has nail head decoration. The blocked
north arcade is just visible and the eastern respond which is
partly exposed appears to be of the same date. The tower
opening is C14 and ogee headed and there is a step up from nave
to tower. Inside the tower the butt joint where the tower was
built up against the pre-existing nave west wall can be clearly
seen. The ladder up to the tower chamber is C16. The C13
chancel arch has 3/4 engaged circular shafts and capitals with
nail decoration. The remarkable nave king-post roof is early
C17 and a fine example with four arch-braced moulded tie beams
decorated with a carved heart at the west end, and circular
rosettes on the undersides of the two central beams. The purlins
and principal rafters are also moulded and at their junctions are
carved corner pieces with scalloped edges. The aisle roof is
C18. At the west end of the nave at high level, behind the roof
tie beam is a deeply splayed circular opening dating from early
C11, and likely to be the original west light of the Saxon
Church.

The east aisle window has C14 stained glass, depicting
the crucifixion, St. Catherine at her wheel, and St. Cecilia with
her organ. The west aisle window has stained glass of 1850.
The fittings and pulpit are C19 but the chancel prayer desk is
C15 with the ends having panels of traceried decoration. The
Alms Box is out of a single piece of wood, and inscribed "This is
Gods Treasury, Cast One Mite into it, 1639". The C15 font is
plain and octagonal and has a wooden bell-canted cover with cross
top. MONUMENTS: In the chancel is a coffin shaped flat slab,
on its side, of a bearded C14 knight, said to be one of the
Disney Family. The carving is in low relief, and the figure is
placed under an ogee gable. Only the upper part of his body is
visible and the shoes, which appear from an ogee headed recess.
This forms the base of a cross which decorates the slab between
feet and torso. The slab is also decorated with the family arms.
Also in the chancel are 3 early C19 marble tablets to the Youngs
of Kingerby Hall. At the west corner of the south aisle are two
further monuments. On the west side is a mid C13 knight, cross
legged, with puppies by his pillow; he has a large shield and a
chain mail surcoat. The second monument on the south side has been
partly truncated, it is late C14, a knight with hands in prayer,
with his feet on a dog, and a finely carved heraldic surcoat and
chain mail. Both figures are on C14 tomb chests with shields in
quatrefoils.