A Grade II* Listed Building in Ashby with Scremby, Lincolnshire 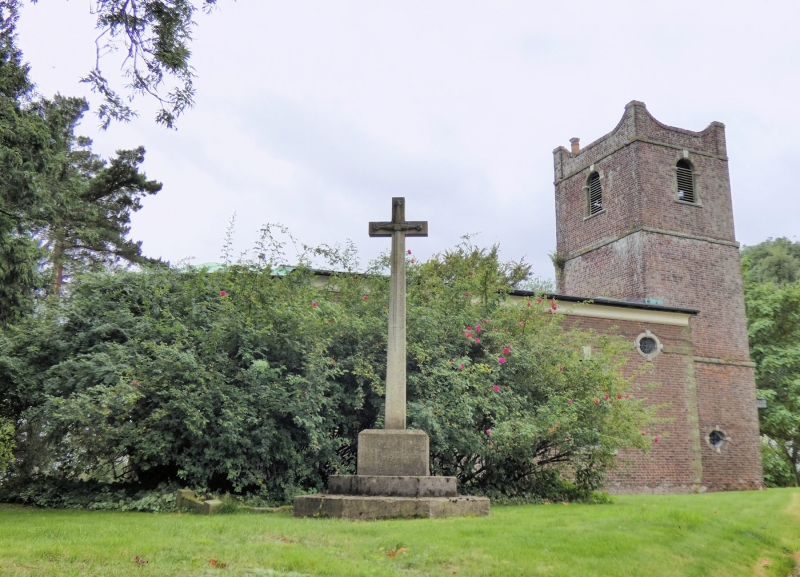 Parish church. 1733. Red brick in Flemish bond, greenstone
ashlar dressings, copper roofs. Western tower, nave, facetted
chancel. 3 stage tower with plinth, 3 stone bands to offset
upper stages and parapet with corner pilasters ramped down to
centres. 12 panel west door set in Gibbsian surround with
pulvinated frieze and pediment. Above a semi-circular leaded
light in rusticated ashlar surround with impost and keystone. To
the belfry stage on each face a similar louvred opening. Sides
of tower both have a sinqle keyed leaded oculus. The side walls
of the nave have ashlar quoins, brick plinth, ashlar band, wooden
covered eaves cornice and 2 semi-circular headed leaded lights.
At the west end a keyed oculus interrupts the high level stone
band. In the east end of the facetted chancel a Venetian window
in flat ashlar surround with bracketed stone cill. On the south
side a small blank organ extension. Interior. Pair of double 6
panelled doors with semi-circular head. Western gallery with
panelled face and C19 rail. The nave and chancel are
undifferentiated and a continuous deeply moulded cornice unites
the 2 spaces. The facetted walls of the chancel each have 2
moulded plaster panels. The rear arches of the nave windows have
moulded architraves. Stained glass east window by O'Connor,
1861. Fittings. Dado panelling throughout, raised and fielded,
dentillated in the chancel. Complete set of panelled pews, with
matching pulpit having fluted Doric pilasters and moulded
cornice. Chair made from 2 C15 poppy head bench ends. Plain C15
octagonal font on moulded base. Pipe organ in polished mahogany
case. Late C18 Snetzler type. Monuments. By the pulpit a pair
of rectanqular wall plaques with panelled pilasters and moulded
cornices, to Dycocks of 1724 and later. On the south side of the
nave a marble wall plaque with segmental top, acanthus side
scrolls, to Martha Moody, d.1742, skull and palms to base. On
the north side an obelisk monument to Charles Brackenbury d.1816
by Walsh and Dunbar of Leeds, with fluted sarcophagus and white
marble tablet.