A Grade I Listed Building in Langton by Spilsby, Lincolnshire 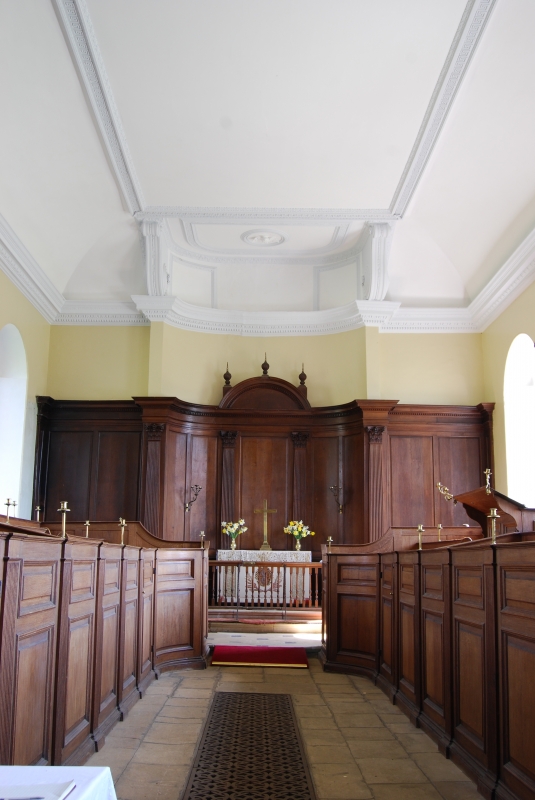 Parish church. Early C18, roof pitch increased 1792, 1825. Red
brick with ashlar dressings. Slate roof with overhanging eaves.
Ashlar quoins. Set on a brick and chamfered ashlar plinth. One
and a half storeys with first floor ashlar band. Nave and
chancel under a single roof. West end with 1825 octagonal
turret, each side with 2 circular openings. West wall with
doorway with moulded ashlar architrave and ashlar pediment.
Either side are single blocked round arched window openings with
ashlar impost and key blocks. Above is a single central oval
blocked window opening with 4 ashlar key blocks and ashlar
surround. Either side are single blind segmental arched recessed
panels with ashlar key stones. The north wall has 5 round arched
windows with ashlar key and impost blocks and lead glazing bars.
Over are 5 blind rectangular recessed panels. The east wall has
3 similar round arched blind windows. Above are 3 segmental
arched recessed blind panels with ashlar keystones. In the apex
is a single small circular opening. The south side corresponds
to the north. Interior. C18 complete internal woodwork
including tiered box pews facing inwards with fluted pilasters
and fielded panels. Similar three decker pulpit the steps with
turned balusters, the tester with entablature and marquetry
soffit. Pews and pulpit with brass candlesticks. Curved reredos
with fielded panels, fluted Corinthian columns and segmental
pediment over with finials. Dentil cornice extending across the
whole of the east wall. Communion rails with turned balusters.
Fielded panelled west gallery supported on 2 fluted columns and
with similar brass candlesticks. The doorway under leading to
the inner west porch with panelled double door with fanlight and
fluted architrave, the west side with panelled reveal. Moulded
plaster ceiling with egg and dart and dentil cornice with 2
decorative brackets above the reredos. The ceiling here being
further decorated. Octagonal C15 ashlar font decorated with
blind cusped tracery to bowl and pedestal, plus early C18 wooden
domed cover. There are 3 hatchments and a single late C18 wall
tablet. In the porch is the remains of a C13 decorated
Crucifixus.