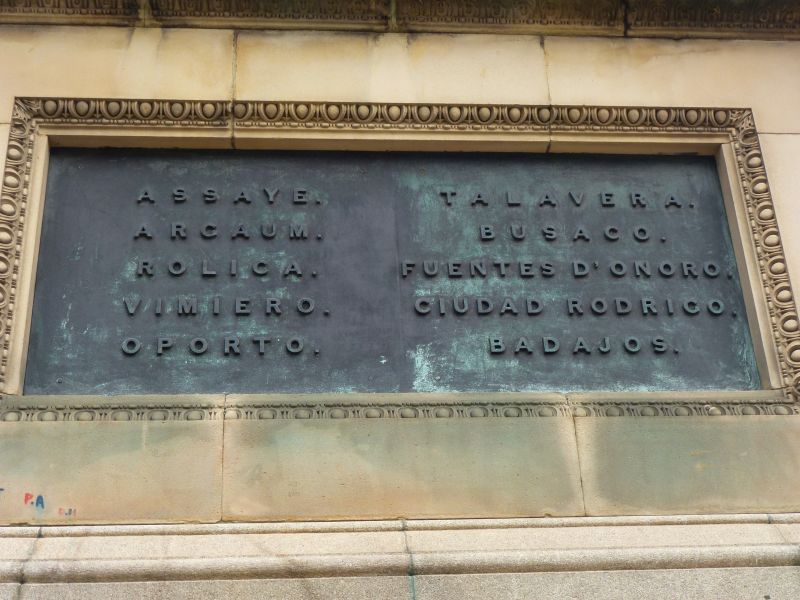 GV
II*
Monument, 1861-1863, by Andrew Lawson of Edinburgh who won a design competition in 1856 (construction of the monument was delayed whilst an appropriate site was found). Sandstone fluted Doric column with a pedestal base set upon granite steps and surmounted by a bronze statue of the Duke of Wellington by George Anderson Lawson, brother of Andrew Lawson. The monument is 132ft (40 metres) high overall. The pedestal incorporates bronze plaques displaying the names of Wellington’s victories and on the south side is a relief depicting the charge at the Battle of Waterloo, which was installed in 1865 and is also by George Anderson Lawson.

HISTORICAL NOTE: The Wellington Column was the regular site for outdoor meetings by the Liverpool branch of the Women’s Social and Political Union (WSPU), the militant suffrage organisation founded in Manchester by Emmeline Pankhurst and other women from the Independent Labour Party (ILP) in 1903. The Union followed the ILP tradition of outdoor propagandising, and used recognisable venues in crowded thoroughfares to try to get its message across. The Wellington Column was used from 1907 until 1914 when the WSPU’s campaign was suspended at the outbreak of the First World War. Suffragette speakers at the column included Patricia Woodlock, Liverpool’s most prolific suffragette prisoner, and Alice Morrissey, a founding member of the WSPU, and the wife of Liverpool’s first elected socialist.