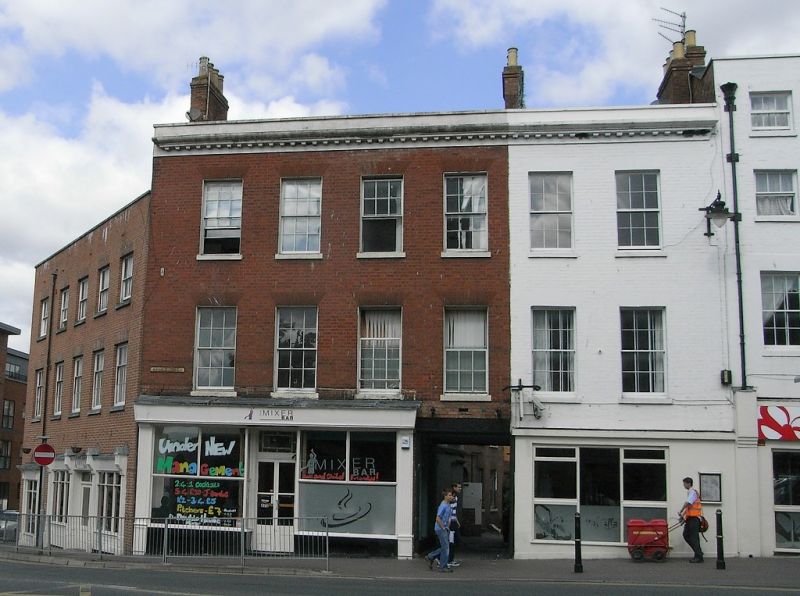 Pair of houses, probably originally with shops, now café and
restaurant with flats over. Numbered right to left, described
left to right. Probably late C18, possibly with earlier origins
and with later additions and alterations including C19 ground
floor shop front at left and c1970s shop front at right. Dark
pinkish-red brick in Flemish bond, painted at right, with
dark-red gauged brick flat arches and stone sills; concealed
roof, brick end and party-wall stacks with oversailing course and
pots. Approximately U-plan with main range and service ranges to
rear. 3 storeys, 4+1 first-floor windows. First and second floors
have 6/6 sashes in plain reveals and with sills, under flat
arches. Eaves band and modillion cornice; low coped parapet.
Ground floor: at left a shop front with outer fluted Doric
pilasters and 2/1 plate glass windows, canted in to central
glazed entrance; fascia. Then a straight-headed carriage opening
with timber lintel on plain pilasters. To right a brick and
glazed shop front. Rear: to rear of arch are 2 Diocletian
recesses with keystones, one to above the other with a further
round-arched blind recess over. Ranges retain many 6/6 sashes,
some flush, otherwise in plain reveals. Range at left has
6-flush-beaded-panel door with fanlight. To rear, right range one
window has fluted lintel.
INTERIOR: rear left range said to retain original staircase to
full height with stick balusters and wreathed handrail.
HISTORICAL NOTE: 'By the sixteenth century, Broad Street was
second only to High Street in commercial importance. On the
direct route through the city from the (Worcester) Bridge (qv),
it contained the business premises of a number of important
traders and at least two inns'. Several houses on Broad Street
are known to have C17 and earlier origins (Nos 32, 40, 41 and 57
(qqv)). However the design of these two houses relates more
closely to the adjacent terraces in Bridge Street, Nos 2-13
(consecutive) and Nos 14-22 (consecutive) (qqv).