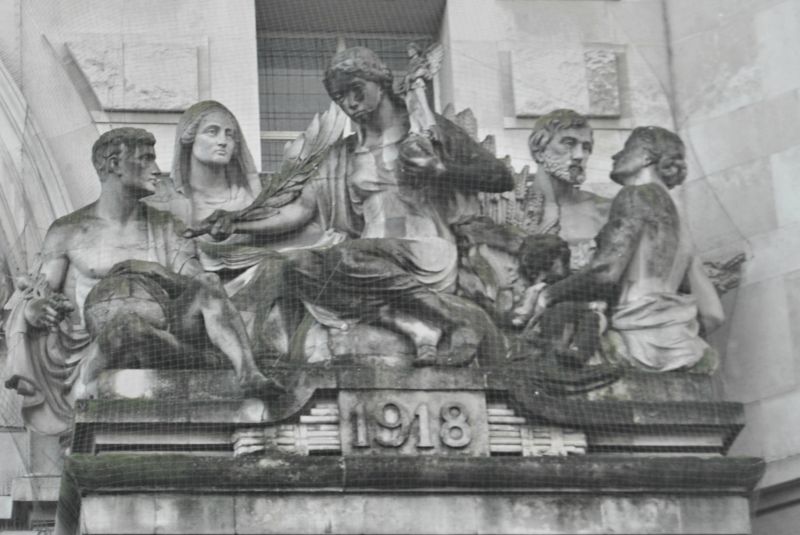 The Victory or Memorial Arch was built 1919-22. It was designed as the main foot entrance to the station at the head of an impressive flight of steps, most of which is within the building. It is in the form of a triumphal arch some three storeys and attic in height, on the butterfly plan; the main arch being flanked by side bays and with one bay canted wings. It was joined to the existing building on the left by a three bay section with recessed centre and giant order, this is not repeated to the right. Balustraded parapet with attic hidden behind. Stonework with heavy rustication in the centre. Sculpture - Bronze plaques under the arch bear the names of 585 LSWR employees who lost their lives in WWI, but the chief features are two sculptural groups, one dedicated to Bellona and dated 1914 and the other, dated 1918, to Peace, under the names of the greatest fields of battle set around a glazed arch set with a clock in a sunburst, and surmounted on the roof by Britannia. Prominent on the concourse side of the arch is the name of the company. The sculptor was the other wise little known Charles Whiffen. The special significance of the monument within the post-First World War genre is that the LSWR staff themselves were, uniquely, consulted on its design. Pylons with iron lamps flank the staircase.

The rest of the station is not of special architectural or historic interest.