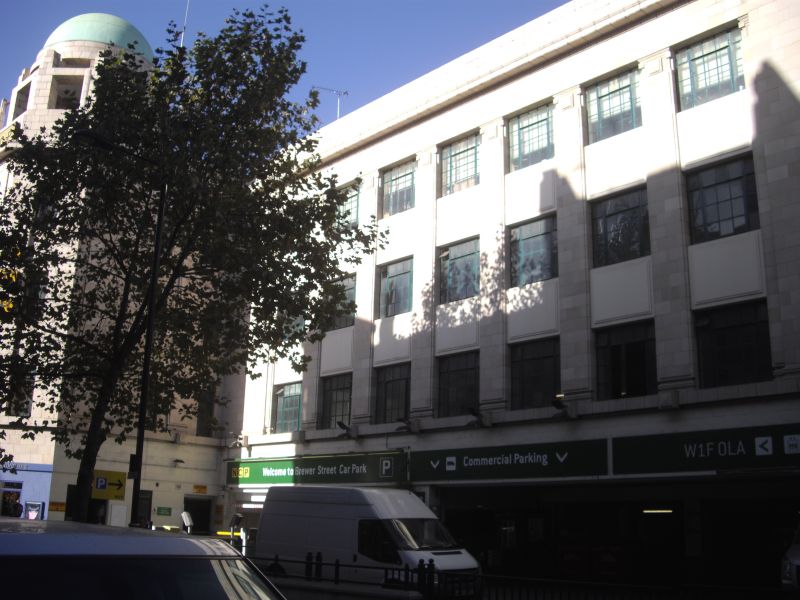 Multi-storey car park. 1929. Robert Sharp (1884-1950) with J.J. Joass (1868-1952). Steel and concrete frame, glazed ceramic front elevation, copper-clad dome, brick-clad side and rear elevations; steel Crittall windows.
PLAN: long rectangular site with forecourt to front, projecting tower at south-west corner. Basement with four upper floors, reached via ramps along west side of building. Lifts and stairs behind tower; other stairs on centre of east side, near Ingestre Place entrance.
EXTERIOR: Classical-Moderne style front elevation. Ground floor originally part-glazed, now open. Upper floors fronted with seven bay front articulated with pilasters, with alternating strips of terracotta and windows, with plain square panels below each opening; parapet above. Recessed easternmost bay with narrow windows to each floor. Canted tower to left of four floors, with plain rectangular openings on each floor to the front three sides; open dome above cornice. Blank front of tower formerly sported a painted inscription panel reading 'LEX GARAGE'. Four bay return to southern part of Lexington Street with pilasters. Eastern flank elevation of unadorned concrete frame with brick in-fill and similar windows, containing secondary entrance. Faded painted sign reading GARAGE on north return.
INTERIOR: parking originally for 1,000 cars over 121,000 sq ft of parking apace over five floors. Largely unencumbered floor plates with ramped access at west side, Heavy concrete beams carry floors above. Turntables formerly in centre of each floor now removed. Former lay-out included a chauffeurs' canteen, cafe and kitchen on front of first floor, with bathroom within tower of each floor; garage and store to front of ground floor, with petrol pumps in forecourt. These features have all gone.
HISTORY: opened in mid-1929 as the 'Lex Garage', this is among the earliest surviving ramped multi-storey car parks to be built in the country and was described at the time as 'probably the largest and best-equipped building for the service of the motor-car that has yet appeared in this congested city'. It was intended to serve the West End, especially Theatreland, to which increasing numbers were coming by car. Its monumental street presence endows it with considerable power.