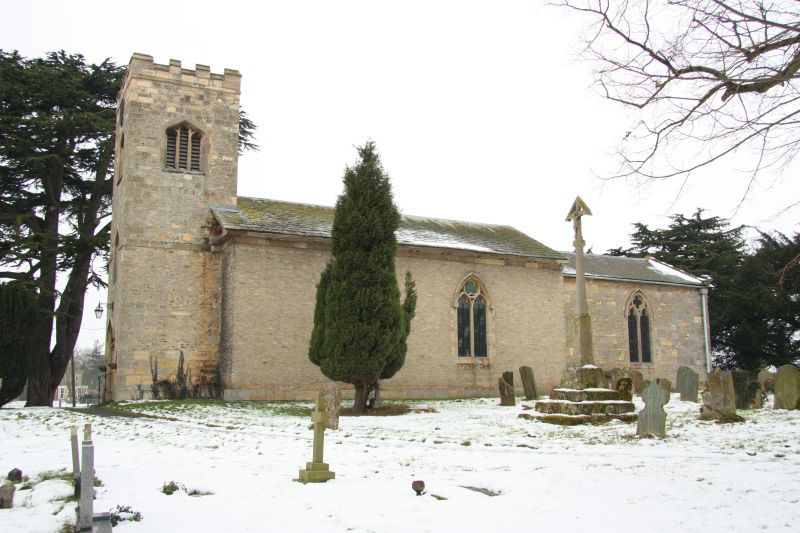 Parish church of SS.Peter and Paul. C15 and 1809 and late C19.
Yellow brick, coursed limestone rubble, slate roofs. Western
tower, nave, chancel, vestry. C15 3 stage tower with plain
plinth, C19 first floor band and battlemented parapet, recut west
door with half round reveals, octagonal capitals and 4 centred
arch and hood mould. To first floor a 3 light window with cusped
heads to the lights and to belfry stage cusped 3 light windows in
all 4 directions. All windows have hollow chamfered 4 centred
arched surrounds. Yellow brick nave of 1809 has battered angles
stepped in towards the west and surmounted by a dentillated
pediment and overhanging eaves. To the north wall one 2 light
decorated style window with hood mould and a second plain pointed
headed window. Vestry of the late C19 with 2 light window and
east door. Chancel north wall of bonded limestone ashlar and
lias rubble with inserted C19 2 light window. To the east end a
3 light window as on the north side. The south wall of the nave
has 2 C19 windows with large plain impost blocks. West door has
C19 ironwork. Interior. Nave is entered through early C19 half
glazed double doors. North aisle is separated from nave by 2
cast iron stanchions and at the east end of the aisle is a plain
doorway to the west. The C19 chancel arch is double chamfered
without capitals and bases. The nave and chancel have C19 king
post roofs. Fittings are C19 including the font, but the pulpit
is C17 and chalice shaped, carved with scenes from the Life of
Christ, said to come from Brittany. In the north wall of the
chancel is a fine repositioned C15 corbel depicting an angel
bearing a shield of arms supporting a moulded octagonal capital.
The east window has stained glass dated 1873. Monuments. In the
north wall of the sanctuary is a square stone wall plaque to John
Reeke, rector, d,1597. Also in the sanctuary but on the south
wall is an oval marble wall plaque to Rev. Hugh Palmer d.1799.
On the north wall is a larger marble wall plaque to Charles Hall,
d.1743 with an urn, putti and scrolls. In the north aisle is a
plaque to the Cole family, late C18. At the west end of the nave
are painted royal arms and round the side walls of the nave are
c19 texts in red lettering.