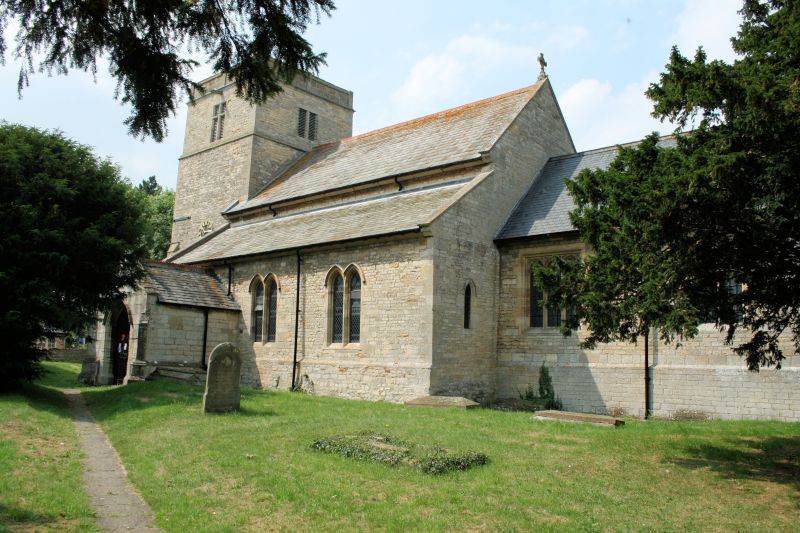 Parish Church. C12, C13, C14, C17 restored 1852 and 1884. Coursed limestone rubble
and ashlar with ashlar dressings. Slate roofs with ashlar coped gables with
kneelers and cross finials. High chamfered plinth, flush ashlar quoins and
chamfered eaves cornice. West tower, nave with aisles and south porch, chancel
with north vestry. West tower 3-stage with moulded and chamfered plinth, second
stage band, and flat set-back buttresses with set-offs. West side has a blocked
doorway with a small chamfered lancet above, the third stage has a cross mullion
bell opening with side shafts. South side has a similar bell opening and below
a C19 clock face. East side has another bell opening with a single mullion and
chevron decorated jambs. North side has a single slit lancet, and a cross mullion
bell-opening above. The tower is topped with a plain solid stone balustrade. North
aisle, west wall is blank, the north wall has 2 pairs of C19 lancets in chamfered
surrounds with hoodmoulds and label stops. The north vestry has a hipped slate
roof with a single 2-light chamfered mullionwindow and a doorway with plank door
in chamfered surround with a relieving arch above, plus to the east another 2-light
chamfered mullion window. The chancel east wall has a pointed 3-light window in
a moulded chamfered surround with reticulated tracery and a hoodmould with label
stops. The south wall has a 2-light and a 3-light flat headed windows in chamfered
surrounds with ornate panel tracery. The south aisle has a single pointed lancet
to the-east in a chamfered surround with hoodmould, to the south are 2 pairs of
similar lancets. The gabled south porch has diagonal buttress with set-offs, and
a shallow pointed arched opening, in a moulded chamfered surround with hoodmould
and label stops, inside are stone benches and a C19 wooden roof. The doorway has
a narrow pointed double arched surround with a C19 panel door, the inner arch is
chamfered, the outer arch is decorated with a keeled moulding, a band of dogtooth
and a hoodmould with label stops, both arches have a plain impost band. The south
aisle west wall has a pair of chamfered lancets. Interior: 3 bay nave arcades
with double chamfered arches, that to the north with a single octagonal pier and
respond plus a single 4 keeled shaft compound pier and respond, that to the south
has 2 compound piers with 4 ringed shafts and keeled responds, all with moulded
capitals and bases. Triple chamfered tower arch. Double chamfered chancel arch
with keeled responds and stiff leaf capitals. Remains of ornate C14 niche to south
of chancel arch with crocketed gable and pinnacles. C13 octagonal stone font.
C13 tomb with defaced effigy of a knight. C19 wooden roofs. C19 wooden pews and
choir stalls. C19 stone pulpit. C20 reredos and altar rail. Wall tablet in north
aisle to Wm Pear 1856 with pilaster surround.