The Wykeham Chapel of St Nicholas

A Grade I Listed Building in Weston, Lincolnshire 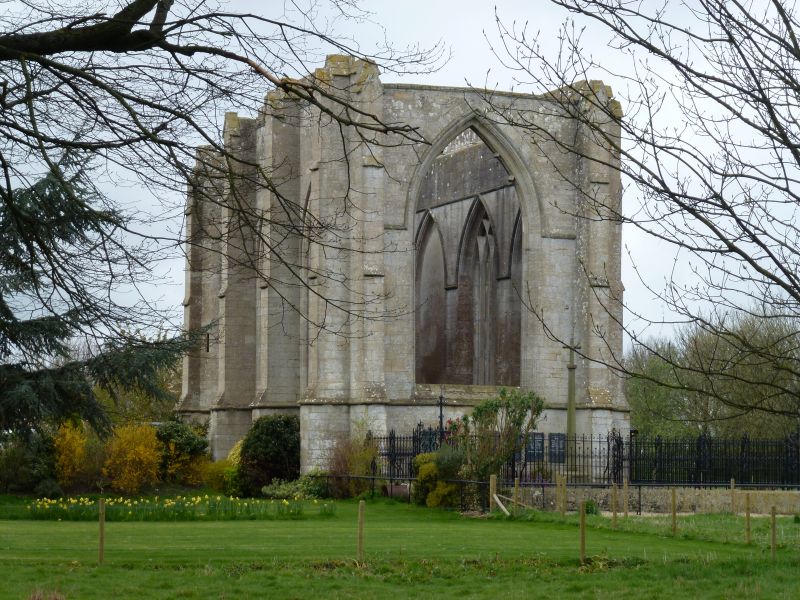 Private chapel, now ruin. 1311, late C18, late C19. Limestone
ashlar, some red brick patching. Nave and chancel in one.
Moulded plinth and string course, regularly placed 4 stage
buttresses with south west polygonal stair turret with slit
lights. West front with large pointed window with slender nook
shafts and hood mould, now blocked with brick. Outline of
building formerly attached to west after the window was blocked;
with rectangular window to right breaking into original window
opening, with ashlar gabled wall above. Rectangular blocked
window and doorway with Caernarvon head to right. Various
corbels below. North side with 3 large pointed windows
alternating with buttresses; that to the right, blocked; those
to the left each with 3 lights and intersecting tracery. East
end with large pointed window with flanking buttresses and sill
band; nook shafts, hood mould and fragmentary tracery in head.
Low late C19 ashlar walls run to east enclosing private
graveyard, with wrought iron railing, and gateway to south.
South side of chapel with doorway to left with pointed head,
continuously moulded surround of 2 orders, and wrought iron gate.
3 large pointed windows above; that to left, blocked; that in
centre with reticulated tracery and 3 ogee headed lights; and
that to right with 3 pointed lights and intersecting tracery.
Small rectangular opening in bay to left. Interior with east and
west windows with nook shafts and hood moulds. East window
flanked by ornate, crocketed and finialled single niches with
flanking pinnacles. South-west pointed doorway to stair turret,
with continuous chamfered surround. Above south doorway is a
shelf with various fragments sculpted with shields. Gable
outlines above east and west gables. Built for Prior Hatfield of
Spalding as a private chapel for his country house. Scheduled as
Ancient Monument No. 45.