Church of St Dunstan in the West (Including Attached Sunday School) 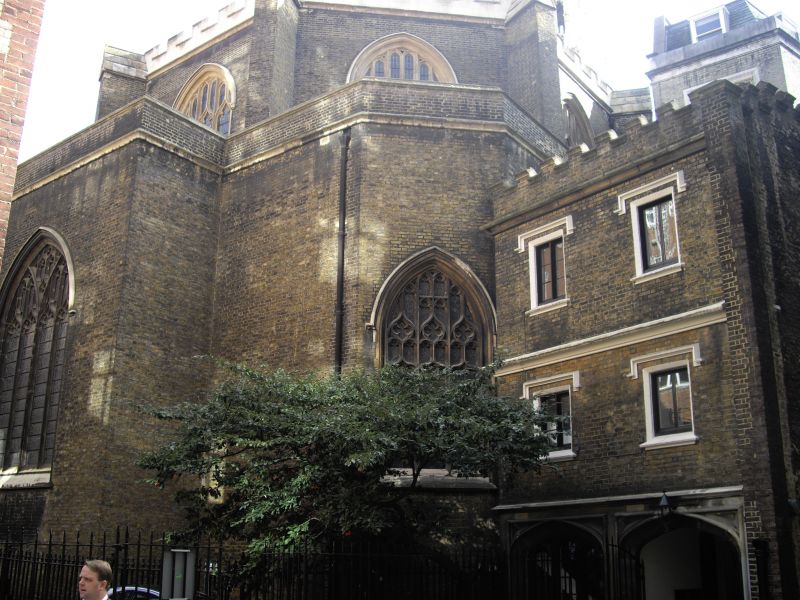 Entry Name: Church of St Dunstan in the West (Including Attached Sunday School)

Parish church and attached Sunday School incorporating church vestry. Church 1830-33 on site of a church dating from c1170, incorporating monuments from the earlier church and statues and masonry from the nearby Ludgate, demolished in 1760 for road widening. Architect John Shaw Senior completed after his death by his son John. Sunday School of 1839 by Shaw. Church is an octagonal, Gothic design in yellow brick with stone dressings. Ketton stone tower to south of three stages with ogee to entrance arch, buttresses and crockets. Top stage has triple arched windows with cinquefoil lights. Above this is slender octagonal stone lantern. Immediately to the right of the south door is a memorial tablet to Izaac Walton erected in 1895. Attached to the east of the church is a bracketed clock of 1671 by Thomas Harris brought to the church in 1935. Above this in a wooden Ionic aedicule are two figures of men wielding clubs to strike bells either side of a false door. Below this is the Northcliffe Memorial of 1930 with obelisk designed by Lutyens and bronze bust by Lady Scott. Plaster vault to interior of church over iron structure with pointed plaster tunnel vaults with transverse ribs, the four diagonal recesses also with rib vaults and main vault star-ribbed above a clerestorey of eight identical windows. Chancel to north. Entrances to west from Clifford's Inn Passage and east (vestry). Fittings of the 1830s by Shaw include pews, font and pulpit with linenfold panelling. Altar surround incorporates early C16 Flemish woodwork. Stalls have fragments of late C17 pierced carving. Organ by Joseph Robson 1834, in a case probably designed by John Shaw. North west window to Izaac Walton by Kempe behind the Iconostasis of c1860 brought from Antim Monastery Bucharest. Wrought iron sword rest of frame type of 1745.Monuments include a C16 brass and figurative tombs, busts and wall tablets dating from the C16 to the mid C19, mainly preserved from the previous church on the site. Attached to the east is the Sunday School with a plaque with the inscription "St Dunstan in the West AD 1839". Stone faced with parapet with two small ball finials with three panels below, the centre one containing the inscription. Centre has aedicule with decorated pilasters and swansneck pediment of c1667 from the Ludgate demolished in 1760. In the central niche is a statue of Queen Elizabeth I in state robes with orb and sceptre, probably made in 1586 by William Kerwin and removed from the Ludgate. Beneath is a round-headed arch with strapwork motif above and beneath the arch in the vestry porch are three decayed stone statues on stone plinths said to represent King Lud and his sons, also removed from the Ludgate.