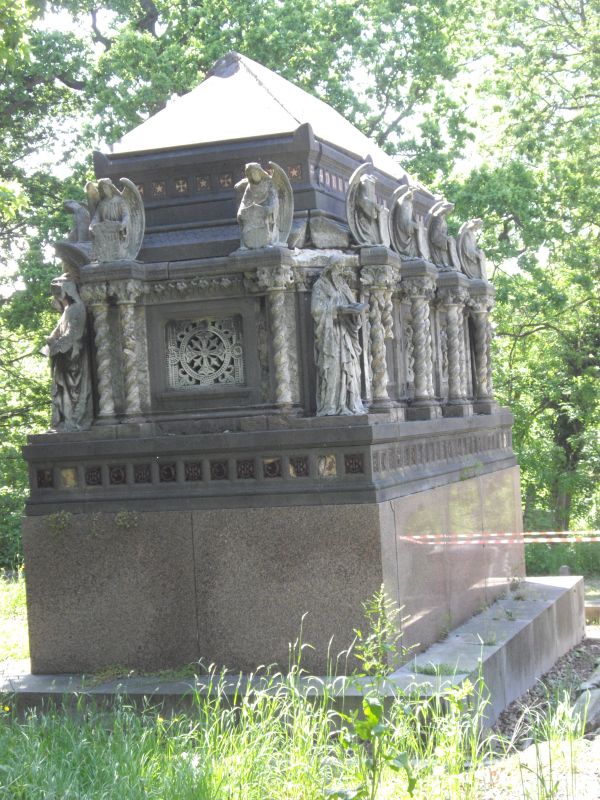 Chest tomb on tall plinth above a vault. c1858 by E.M. Barry;
sculptures by Thomas Earp. Pink granite plinth, marble
superstructure and Portland stone sculpture. Medieval Italian
style. Rectangular stone base on which the battered pink
marble plinth with a top frieze of Minton tiles carrying the
letter B for Berens and a bear, in punning reference to his
name; doorway on western elevation now bricked up but
originally with bronze doors manufactured by Potter who also
made surrounding cast iron railings, now gone. Free-standing,
paired barley sugar columns surround the chest and support a
foliated cornice; above each pair, a sculptured kneeling angel
holding a shield. At the angles the cornice rises up to form
pointed arch aedicules for figures of the 4 evangelists.
Between the columns, panels carved in deep relief showing
scenes from the life of Christ; eastern panel an open-work
cross within a roundel. A further frieze of Minton tiles,
including a Latin inscription, under the eaves cornice with
antefixae. Hipped marble roof. All in a state of considerable
decay. Berens was a linen draper of St. Paul's Churchyard who
made a fortune in the "fancy trade; the tomb was said to have
cost £1,500 and was illustrated in the Builder of November
1858.

2.
d. 1858; by E M Barry. On high, red granite plinth, a marble sarcophagus in mediaeval
Italian style with high relief panels divided by paired spiral twist columns;
above these, seated angels rise before a pitched lower roof to the eaves of a
raised hipped roof of marble slabs; large figures of Evangelists in niches at the
four corners.