Northern portal and parapet to the Blackwall Tunnel 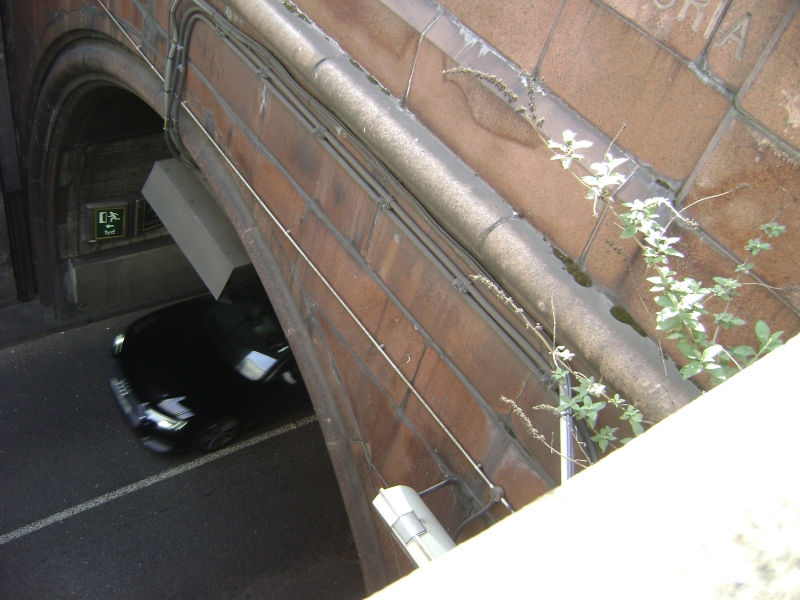 Entry Name: Northern portal and parapet to the Blackwall Tunnel

DESCRIPTION: the portal consists of the round-arched tunnel opening with a parapet at the top separated by a roll moulding. The parapet, which fronts onto Poplar High Street, has a sloped and rounded coping and square end-piers, each with four semi-circular faces with inscribed decoration. The arch has moulded decoration. On north face of the parapet an incised inscription reads ‘THIS TUNNEL CONSTRUCTED BY THE LONDON COUNTY COUNCIL WAS OPENED BY/ HRH THE PRINCE OF WALES K.C. ON BEHALF OF HER MAJESTY QUEEN VICTORIA ON 22nd MAY 1897 IN THE 60th YEAR OF HER REIGN/ SIR ALEX R. BINNIE ENGINEER'.

SUBSIDIARY FEATURES: the portal is adjoined to the south by the tunnel* itself, including steps* to a raised walkway* on the west side of the carriageway. It is also adjoined to the north by high retaining walls*, encased in concrete and faced with Portland stone in the 1950s, topped with modern metal safety barriers*. The parapet is adjoined at the eastern end by modern iron railings* and at the western end by a low concrete wall* connecting to a modern building* across the tunnel carriageway housing a drop-down flood gate. Those structures marked by an * are excluded from the listing.

* Pursuant to s1(5A) of the Planning (Listed Buildings and Conservation Areas) Act 1990 (‘the Act’) it is declared that these aforementioned features are not of special architectural or historic interest.

The original plan for a first practical vehicular road tunnel under the River Thames was undertaken by the Metropolitan Board of Works which obtained an Act in 1887. Sir Joseph Bazalgette’s plan was for three parallel tunnels, with separate tunnels for vehicles and pedestrians, and the work was to have been completed within seven years. However, the Metropolitan Board of Works was wound up on 21 March 1889, prior to the establishment of the London County Council on 1 April 1889, just as contracts for the work were about to be let. A new scheme was proposed following an inspection of the compressed air working used to hold back the outside water pressure at the Hudson River tunnel in New York and the St Clair tunnel in Canada. The new scheme, reduced to a single tunnel, was devised by the London County Council Chief Engineer, Alexander R Binnie (1839-1917) and submitted on 20 November 1890. The tender of S Pearson and Son (who were building the Hudson River tunnel), of £871,000, was accepted towards the end of 1891 and work began in 1892. The tunnel is 1,890m long with an outside diameter of the cast-iron lining of 8m. The Blackwall Tunnel was opened by the Prince of Wales on 22 May 1897.

By the 1930s the tunnel was becoming inadequate due to the volume of traffic and the London County Council obtained an Act in 1938 for a new tunnel sited to the east of the original one. However, the war intervened and construction works did not begin until 1958. The eastern tunnel opened in 1967 and is used for south-bound traffic with north-bound traffic using the original tunnel.

In 1999 the tunnel was supplemented by flood gates housed in a building over the carriageway at the entrance to the tunnel obscuring, but not altering, the portal.

The northern portal and parapet to the Blackwall Tunnel, built in 1897 probably to designs of Alexander R Binnie, is listed at Grade II for the following principal reasons:

Historical interest:
* as the northern portal to the first vehicular tunnel built under the Thames.

Architectural interest:
* for its striking use of pink polished granite and its commemorative inscription.