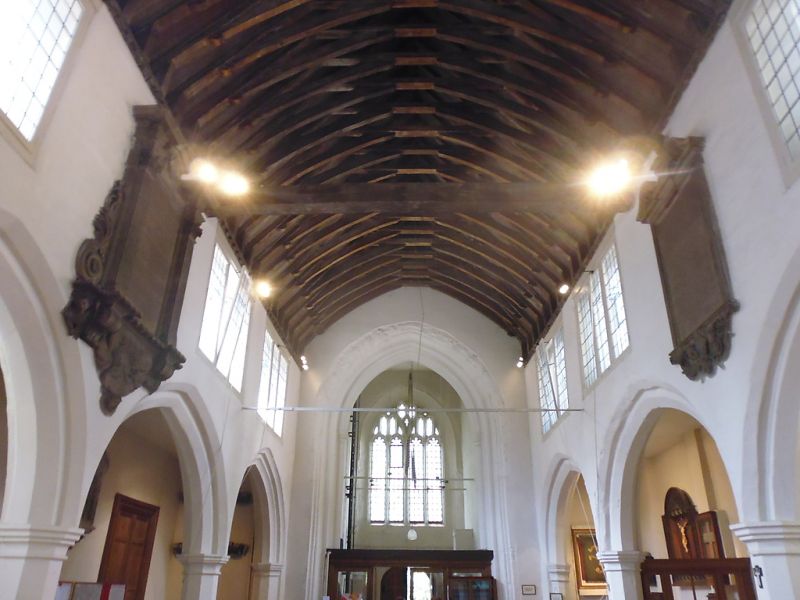 II*
Parish Church. Possible C14 core, C15 tower, further rebuilding and restoration in early-C18, 1829, 1882, 1895 and the 1950s. Kentish Rag stone with brick additions and tiled roofs.
EXTERIOR: C15 West Tower with Southeast turret of Kentish Rag ashlar, this with brick upper part with timber clock turret rebuilt by H.S. Goodhart-Rendel after WWII damage (this replacing 1829 rebuilding). Perpendicular style West door with square label and window above. Rubble stone north aisle, possible of C14 date. The aisles, clerestory and chancel have straight-headed late Perpendicular style windows with elaborate cusping, renewed in the late-C19 restorations. South aisle refaced in 1794, with small Tuscan portico added in mid-C20. To north, brick vestries of early C18 and 1900 by SPAB committee.
INTERIOR: West tower has tall Perpendicular arch with moulded caps on rounded shafts. Nave of six bays, the arcade of low octagonal columns with moulded capitals, carrying double-chamfered arches, these extensively restored in late-C19, although these may date from pre-C15. Double glazing to windows of 1900. Roof is of common rafters with bulky tie beams, these left roughly hewn as part of late-C19 restoration. 2 bay Chancel has late medieval roof with moulded tie-beams and carved bosses, the panels renewed 1900. Also C18 panelling, 1881 raised and tiled floor by A.W. Blomfield, and east window by H. Lewis Curtis as part of mid-C20 rebuilding campaign. c.1630 and early-C18 communion tables. Octaogonal font with perpendicular tracery. Fine monuments including those to Grace Amcottes, died 1551; Alice Coborn, died 1689; and Prisca Coborn, died 1701. Font is octagonal with Perpendicular tracery.
SUBSIDIARY: The church forms the central component of a narrow island site. The church forms a group with the perimeter Gothic style iron railings (reinstated in 1984), gate and piers to the churchyard, which was enlarged to the east in 1824. Also group value with the statue of W.E. Gladstone and bollards, as well as Our Lady of St. Catherine Roman Catholic Church, and No. 1999 on the north side of Bow Road.
HISTORY: Built as chapel of ease to Stepney (licence of 1311) and parish church from 1711. St. Mary was subject of an extensive late-C19 restoration, following the 1896 collapse of the chancel roof. This was supervised by a committee of the SPAB and undertaken by architect Osborn C. Hills of local firm Hills and Son, with extensive debate over the approach or replacement versus repair of original fabric, and which was the subject of heated local concern. The church was the subject of the second Survey of London monograph, written by Hills. It suffered heavy bomb damage in WWII, and the site was visited by the Queen in March 1951, and plans prepared for its reconstruction by H.S. Goodhart-Rendel.
SOURCES: Survey of London monograph by Osborn C. Hills, 1902; Buildings of England, London: East (B. Cherry, C. O'Brien and N. Pevsner, 2005); RCHME, An Inventory of the Historical Monuments in East London, v.5, 1930; Faculty drawings in Guildhall Library collection; The Builder June 10th 1899; committee papers in SPAB archives.

Listed at Grade II* (having been listed at Grade B since 1950) for its C15 tower, and possibly C14 core, as well as extensive C18, C19 and C20 alterations and additions, these of interest in themselves as late-C19 SPAB committee restoration carried out by Osborn C. Hills and mid-C20 rebuilding following heavy war damage by H.S. Goodhart-Rendel.