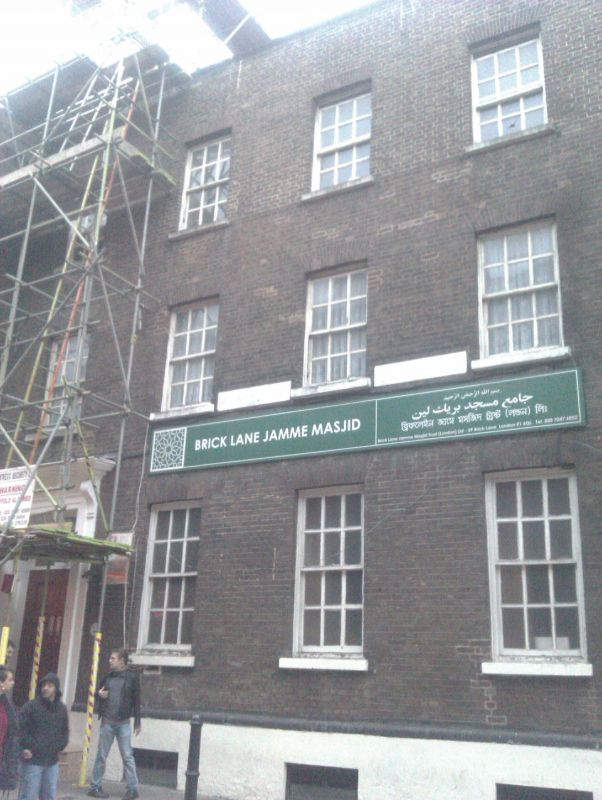 EXTERIOR: The building resembles a plain four-bay Georgian house of three-and-a-half storeys above a basement. The entrance doorway is on the left, atop five stone steps, and has double-leaf four-panelled doors set within a timber doorcase with panelled reveals and a moulded architrave on shaped supporting brackets. The windows are six-over-six-pane sliding timber sashes with stone cills and flat-arched heads of gauged brick. The roof is of plain tile with lead-covered dormers.

INTERIOR: Much altered, but retaining some plaster mouldings and a timber main staircase with turned balusters.

HISTORY: No. 59 Brick Lane was built around 1743 to accommodate the vestry and school attached to the neighbouring Neuve Eglise, a French Protestant chapel serving the Huguenot community then dominant in the Spitalfields silk-weaving industry. Both buildings were probably designed by Thomas Stibbs, surveyor to the congregation's mother church at Threadneedle Street in the City of London. The later history of the site reflects the changing ethnic and religious character of this part of east London. In the early years of the C19, Jewish immigration to the area prompted the Society for Propagating Christianity among the Jews, an evangelical group founded by the Jewish-born convert Joseph Frey, to lease the complex as its headquarters. In 1819 the chapel passed to the Wesleyan Methodists, but reverted to its earlier missionary use later in the century. In 1897 the site was acquired by a Lithuanian Orthodox Jewish group known as the Mahzikei Hadas ('Strengtheners of the Faith'), who employed the firm of Messrs Maples to convert the chapel into the Spitalfields Great Synagogue. No. 59 was used, along with the chapel's remodelled attic space, as a Torah school. In the second half of the C20 the Jewish population dispersed to the suburbs, making way for a new wave of Muslim immigrants from eastern India and Bangladesh; the synagogue fell into disuse for a time before becoming a mosque in 1976. Following the remodelling of the interior in 1986, No. 59 now serves as the main entrance to the mosque complex, and accommodates its administrative office and teaching facilities. The former chapel building, now the mosque's main prayer hall, is separately listed at Grade II*.

REASONS FOR DESIGNATION: No. 59 Brick Lane, built around 1743 as a school and vestry to the neighbouring Huguenot chapel, and converted along with the latter to form a synagogue in 1897 and a mosque in 1976, is listed at Grade II for the following principal reasons:
* Architectural: a handsome and externally unaltered mid-Georgian building attributed to a named architect
* Group value: close architectural and historic association with the neighbouring former chapel building, listed at Grade II*
* Historical: the two buildings represent a rare example of a Huguenot chapel complex located at the centre of London's principal C18 silk-weaving district
* Sequence of uses: the site represents a uniquely complex instance of the 'recycling' of a place of worship, its succession of religious uses encapsulating the rich migration history of East London