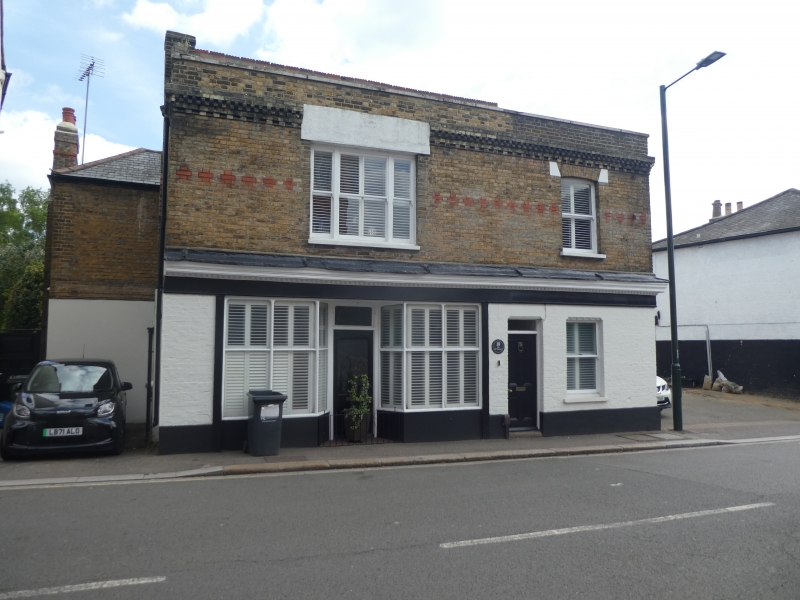 MATERIALS: Timber frame, rendered, and in part lined as ashlar (8a & rear of 10); brick, possibly replacing a timber frame, rendered and the front lined as ashlar (8), all with plain tile roofs. The street elevation and returns of no 10 are refronted in stock brick with red brick dressings, the ground floor painted or rendered; this range has concrete tile roofs. Late C19 stock brick bay to no 10 under hipped slate roof. Rear ranges in painted or rendered brick with red pantile and concrete pantile roofs.

PLAN: No 10 comprises two-storey parallel ranges with a ground floor shop in the front range, and a later C19 added northern bay. At right angles at the rear running along the boundary of the plot are single storey kitchens and workshops under two roof levels. No 8a occupies the southern bays of the late C16 to early C17 timber framed building, including the stack. Replaced stairs rise next to the stack but outside the original building. The rear bay of the building under a catslide roof is a later C19 addition and formerly connected with the remainder of the pub. Blocked doorways on both floors are visible. Beyond this are later C20 additions of no special interest. No 8 is roughly square on plan, originally butting onto the north-south range. It has a particularly tall hipped roof. During the later C20 the rear wall was rebuilt and the house extended under a flat roof. The internal plan does not survive.

EXTERIOR: No 10 has a two-storey street elevation with a ground floor symmetrical shop front to the left, with large 3 over 3 pane windows, canted to frame a part glazed door which is set back under a plain overlight. To the right is a four-panel door under a plain overlight and at the far right a single, horned sash. All are set under a continuous dentil cornice over a plain fascia, beneath which the brickwork is painted or rendered. The upper floor has a tripartite window over the shop and a single horned sash over the ground floor window. A flush red brick band and enriched, stock brick cornice beneath a tall plain parapet extend to the south elevation where the brick frontage wraps round the building. The remainder of the south elevation is of painted brick and has a blind first floor window. The north elevation is of stock brick with an exposed stack suggesting the adjoining structure has been demolished. The stack is reduced in height. The roof has concrete tiles and a red tile ridge. No 8a has a gabled two and a half storey south facing elevation with a renewed entrance which is recessed, and has replaced, flush, two-leaf timber casements most of six lights but in previous openings. There is one on the ground floor and attic, two to the first floor. A T-plan ridge stack is of red-brown brick. No 8 has a two-bay, two-storey west facing elevation which has been re-rendered and lined as ashlar, and has replaced eight over eight pane sashes and a replaced panelled door, also in previous openings. The roof is steeply pitched with a slight splay. Stacks have been removed.

Rear. No 8 has a flat-roofed extension which is not of special interest. No 8a has a late C19 extension under a catslide roof with a single first floor sash window. Later additions attached to it at ground floor and to the north of it are not of special interest. The late C19 two storey bay attached to no 10 is not of special architectural interest in its own right. The single storey rear ranges to no 10 in part have replaced roofs and have altered openings. Although their architectural interest is diminished they are of historic interest for their association with the attached buildings and incorporate part of the red-brown brick boundary wall.

INTERIOR: No 10. The ground floor shop is fitted as a pharmacy. The walls are lined in timber panelling with etched glass panels set into the pilasters, and have bookshelves above stacks of deep labelled drawers on the rear wall. The right hand ground floor room has a small plain angle fireplace with a mid C19 cast iron grate. There is there is a plain probably C18 fireplace with an ornate mid C19 grate in the room above. The first floor front range has a two-bay chamber with a deep, C18, enriched modillion cornice, and a chimney piece with an eared architrave, which is possibly not original, and a mid C19 round-headed cast-iron grate. The door is of six panels and has been moved from its original doorframe to create a lobby. Roof purlins and spine beam of the rear range are visible. Cupboards have probably renewed butterfly hinges. At roof level there is a flying freehold between 8a and 10. The ground floor of the rear range has added late C19 fittings. The later C19 sitting room in the added bay is complete with its fireplace, panelled window linings and mouldings which are typical but not remarkable for the period.

No 8a. The frame is exposed on both floors. Much of the ground floor frame is removed, although a chamfered spine beam with nearly lambs tongue stops is in situ; on the first floor a robust jowelled post and mortices for braces to the truss and gable wall are evident. The ground floor brick fireplace is rebuilt using the chamfered bressumer. A smaller brick fireplace on the fist floor is more intact. The side purlin roof remains, with additional strengthening. The later rear bay has blocked entrances formerly linking it to no 8.

No 8 has been reordered internally. The former ground floor pub room has a deep moulded cornice. The partition wall with the hall reuses mouldings taken from the outer wall when the stairs were inserted. The roof survives with added strengthening.

SUBSIDIARY FEATURES: No 8a has a late C19 extension under a catslide roof with a single first floor sash window. Later additions attached to it at ground floor and to the north of it are not of special interest. The late C19 two storey bay attached to no 10 is not of special architectural interest in its own right. The single storey rear ranges to no 10 in part have replaced roofs and have altered openings. Although their architectural interest is diminished they are of historic interest for their association with the attached buildings. They occupy the rear of the narrow burgage plot and incorporate part of the historic red-brown brick boundary wall.

HISTORY: The buildings are complex interlinked structures dating from the late C16 or early C17 to early C20. The building occupied by Nos 8 and 8a was a public house until the mid 1950s when it became a ships' chandlers' business and family home. Nos 8 and 8a were formed when the building was divided and refurbished in the 1980s to create two separate two-storey houses. No 10, on the street frontage, was a pharmacy until the mid 1980s and is now solely residential. The rich C18 interior reflects the prominent position of the house and wealth of the area in the C18. The buildings lie between the High Street and the parish church, close to the River Thames.

REASONS FOR DESIGNATION: Nos 8, 8a & 10 High Street are listed Grade II for the following principal reasons:
* 8a and 10 occupy a late C16 to C17 structure.
* 10 retains mid to later C18 interiors and inter-war pharmacy shop fittings.
* Despite alterations 8 retains its footprint and is important historically as part of the former public house
* They are part of a strong group of buildings which define the historic core of Hampton, close to the parish church.