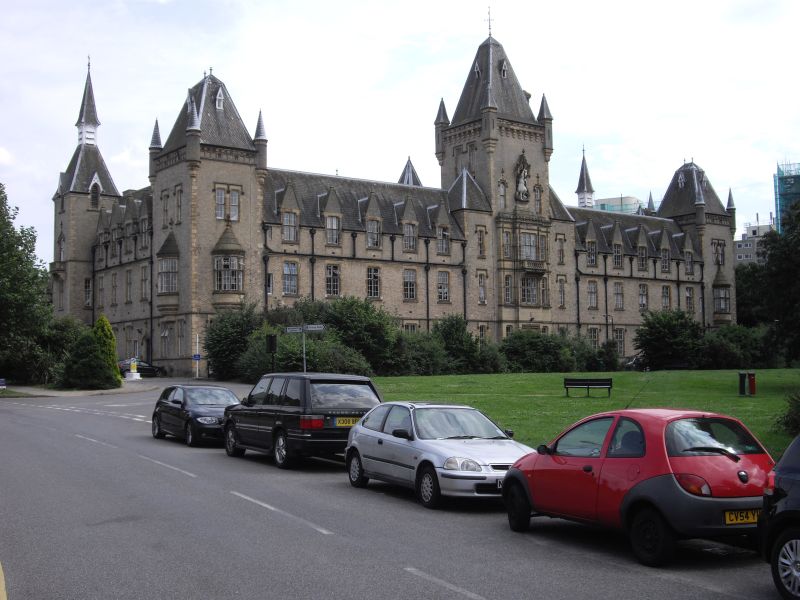 The school consists of regular three-storey rectangular ranges round two open courts divided by a central hall, plus a service court to the east surrounded by a single-storey range with former kitchen (now theatre space) on south side.

Yellow brick with Yorkshire stone dressings. Slate roofs of high pitch. Mullioned and transomed windows with metal frames. Oriel window with bands of naturalistic carving at the base at north west corner. Scottish baronial style with Jacobean and French elements, five towers with pyramidal roofs and many corner tourelles. Ornamental timber fleches over roof of hall and former kitchen.

Main front faces west and has central and corner towers, the former having a three-storey stone frontispiece culminating in a figure of St George and the Dragon in ornamental niche.

Side elevations, with square pyramidal roofed towers as accents on north and south sides. Ranges round service wing simpler, with some toplighting.

Interior generally now quite simple. Symmetrical plan with enclosed cloister walks of one storey with open timber roofs round courts. Two main stairs. The main hall has wallplate carved with foliage beneath a tripartite boarded roof paned with emblems of countries and towns of Britain and the Empire, painted by J.G Crace and restored 1987. Some good boarded roofs in other rooms. Open timber roof in kitchen survives above present temporary structure.

HISTORY. The Royal Victoria Patriotic Fund was endowed with money raised by appeal for the windows and orphans at the end of the Crimean War. These buildings were built for the girls' school, which opened in 1859 and moved out of London in 1938. A boys' school was added on a site to the north in 1872-3