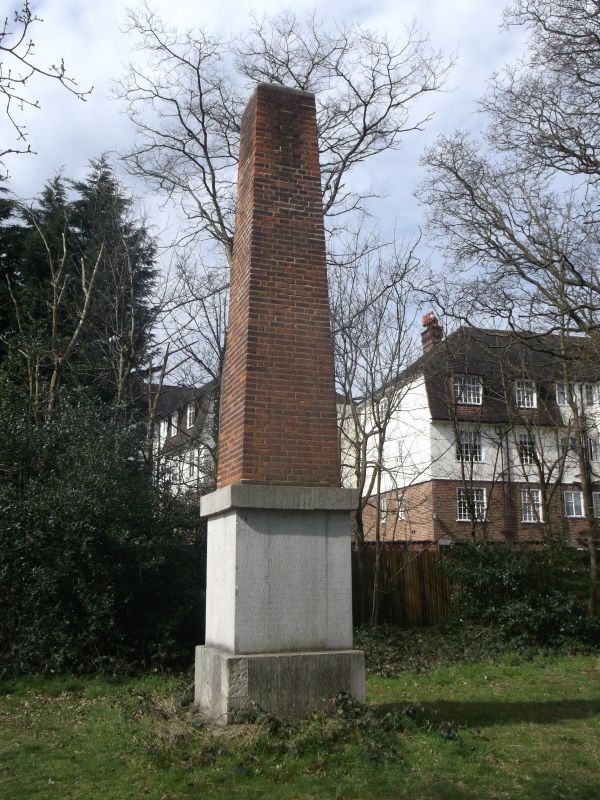 Obelisk. Erected from 1776 'in memory of an invention for securing buildings against fire'. Red brick on stone base, now set on concrete slab, with inscription on 4 sides. The obelisk was erected by the City of London and the first stone laid by the Lord Mayor, John Sawbridge on the centenary of the Fire of London. The fireproofing was first used by David Hartley in his nearby house and consisted of plates of iron and copper between double floors. Experiments were conducted in the presence of the Royal Family and pronounced successful, hence the obelisk. Formerly in the grounds of Wildcroft Manor. Attributed to George Dance. Pevsner and Cherry, Buildings of England, London: South, 1990,683. Stroud, D., George Dance Architect, 1741-1825,1971, 241.

North face inscribed: by the Commons of Great Britain in PARLIAMENT ASSEMBLED Lunae 16 Die Maii 1774 Resolved NEMINE CONTRADICENTE That a sum not exceeding Two Thousand five hundred Pounds to be granted to His MAJESTY to be paid To DAVID HARTLEY ESQr Towards enabling him to defray the charge of Experiments in order to ascertain the practicability and utility of his INVENTION for securing buildings from Fire and that the same be paid without Fee or Reward Confirmed by ACT of Parliament ANNO 14 GEORGE 3 REGIS.

South face inscribed: THE RT. HON. JOHN SAWBRIDGE SQRE LORD MAYOR OF LONDON LAID THE FOUNDATION STONE OF THIS OBELISK ONE HUNDRED AND TEN YEARS AFTER THE FIRE OF LONDON ON THE ANNIVERSARY OF THAT DREADFUL EVENT IN MEMORY OF AN INVENTION FOR SECURING BUILDINGS AGAINST FIRE.

West face inscribed: HALLIFAX MAYOR A COMMON COUNCIL holden in the chamber of the GUILD HALL of the CITY of LONDON on the 22nd of November 1776 RESOLVED that JOHN SA WBRIDGE ESQr. the late LORD MAYOR of this CITY having laid a Foundation Stone for erecting an obelisk on Putney Common to commemorate the invention of FIRE PLATES for securing buildings from FIRE by DAVID HARTLEY ESQ The committee of the City Lands be empowered to erect and compleat the same.

East face inscribed: by VIRTUE of a ORDER of the Right Hon the LORD MAYOR ALDERMEN and COMMONS of the CITY of LONDON in Common Council Assembled Dated the 22nd November 1776 DAVID HARTLEY Esq. was admitted into the FREEDOM of the said CITY in the COMPANY of GOLDSMITHS in the time of the Rt.Honble Sr. THOMAS HALLIFAX. KNT. LORD MA YOR and BENJAMIN HOPKINS ESQ CHAMBERLAIN in CONSIDERATION of the ADVANTAGE likely to accrue to the PUBLIC by his INVENTION of FIRE PLATES for securing buildings from FIRE and for his respectful attention to the CITY in his repeated EXPERIMENTS performed before many of the members of the COURT. The RECORD of which experiments and also of his admission into the FREEDOM of the said CITY of LONDON is entered in the BOOK signed with the letter R&c IN WITNESS whereof the SEAL of the
office of CHAMBERLAIN thereunto affixed DATED in the GUILD HALL of the same CITY the 26th day of March in the 17th Year of the Reign of OUR sovereign LORD GEORGE the THIRD &c. And in the Year of our LORD MDCCLXXVII (L.S.)