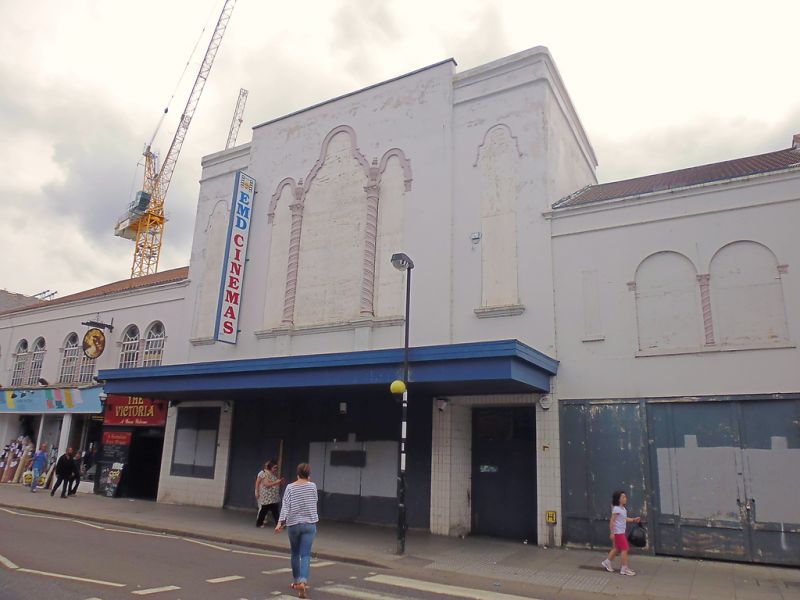 Cinema, constructed in 1929-30 as the Granada, for Sidney Bernstein. Architect: Cecil Masey (1881- 1960) with the interiors by Theodore Komisarjevsky (1882-1954). Stone frontage, brick retaining walls to steel frame. Roof not seen. Cinema with single balcony, now with small screens set underneath balcony, and set behind deep foyer with sbops to either side.
EXTERIOR: Two-storey rendered facade in Spanish Baroque style; pantiled low-pitched roof to the eaves on the wings. The roof is not visible on the central foyer block, which is higher than the wings. The left wing is of four bays and the right is of one bay. The central block advances slightly, twice, with a tripartite window having engaged spiral columns (surmounted by composite capitals and urns) and triple-arched and cusped Spanish baroque heads. There is a cantilevered canopy over the entrance. Coved cornice to outer bays. Glazing bars of metal creating square panes, except for elaborate Moderne glazing in the tops of the windows in the foyer block and lunettes in the windows in the wings. Late 20th-century shop fronts to ground floor, arched paired windows to upper floor with spiral columns. The left return wall is also rendered and has exit doors and smaller windows for stairs etc. Under the right wing is a carriageway. To the right of the main entrance is an exit door from the public house on the first floor. Rear walls in stock brick. Two steps up to original entrance doors.
INTERIOR: An outer lobby leads into a rich Ionic pilastered double-height foyer (there was previously a second set of doors separating the two spaces). Between the pilasters are six mirrors with arched- heads and shaped aprons. Full entablature and fielded ceiling. At the end, central stairs descend to a
1

lower foyer and the former stalls level, while flanking flights ascend first to a landing running the full- width of the foyer and then up to a large transverse balcony foyer with a fielded segmental barrel ceiling. All stairs in Travertine. The walls of this inner foyer are divided into bays by engaged half- columns and alternating bays containing arch-headed pier-glasses over console tables. Two Art Deco ventilation grills in the ceiling. Eleven French-style chandeliers in the foyer areas. Original furniture comprising four upholstered wing chairs and three arm-chairs. Behind steps at each end are twin door- cases (doors removed) into lobbies from which the balcony is accessed by short flights to entrances in the sides of the auditorium. Large and elaborate double-height auditorium in the Moorish style. Superimposed proscenium, with Moorish fretwork on the first three coves, to accommodate cove lighting. Dado running forward from the proscenium. Ante-proscenium splay with' Maqarnas' or stalactite-work above highly ornamented grills. Side walls with larger Islamic arches incorporating more stalactite-work (enclosing two smaller arches), areas of fluting and horseshoe arches over the balcony entrances. The latter have splayed voussoirs, ornamented tympana, cusping, fluting and flanked by pilasters enlivened by low-relief Moorish decoration. Ceiling of interlacing mouldings with a star-burst centre. The sides of the rear balcony have been brought in and the ceiling rises into a cove figured with lattice decoration. More quasi-Islamic decoration can be seen in the ventilation grills on the ceiling. Serpentine balcony front. The area under the balcony is subdivided making two small auditoria but the original coffered ceiling is still visible. Stage with original tableau curtains. Original suspended light fittings. On the first floor above the entrance lobby and extending down the long wing on the front of the building, is an area which was originally a cafe and is now a public house; steps leading to its former internal entrance can be seen in the left wall of the foyer. In the cafe, vestiges of the original decoration still survives. The Christie organ also survives and is in playable condition. One console, with Saracen decoration, is mounted on a trolley and can be wheeled on to the stage. The other one, now disused and partly dismembered, is beneath the apron stage. The organ chambers are in the roof over the auditorium and are positioned above and slightly forward of the proscenium.
ANAL YSIS: An important example of the large and elaborate cinemas built by Sidney Bernstein between 1930 and 1939, generally in artisan districts where such escapist palaces of entertainment would be most popular. The exterior is largely original, while internally, most of the 1930 appearance survives. It is one of very few cinemas (in fact buildings of any type), designed in the Moorish style in Britain. There is the added interest of the organ, with a unique console. The ABC is the oldest surviving of the cinemas designed by Komisarjevsky in London.
SOURCES: Malcolm Webb, Greater London's Suburban Cinemas 1946-86, Amber Valley Typesetting Services, Birmingham, 1986, page 88.
Richard Gray, Cinemas in Britain, Lund Humphries Publishers, London 1996, pages 74,77 and 135. Allen Eyles, The Granada Theatres, Cinema Theatre Association, London 1998, pages 33-38 and 254.
2