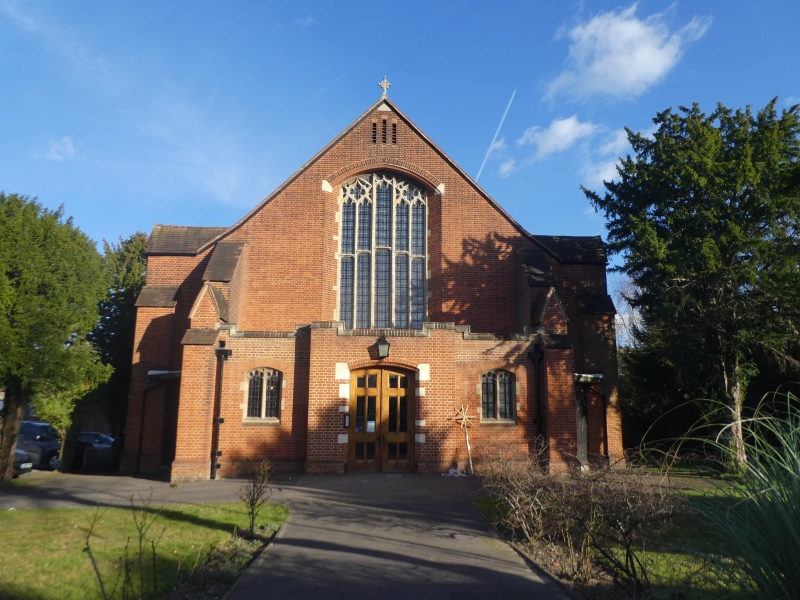 EXTERIOR: the church presents its west end to the road. This has a large five-light Perpendicular window under a depressed head, and across the west front there runs a flat-roofed single-storey narthex with entrances to the north and south. The doorways are covered by flat triangular concrete canopies covering the angles between the narthex and aisles. The narthex has three one-light windows in the central portion which is brought forward from the flanking parts which each has a two-light Perpendicular window. The heads of the narthex windows are formed of tiles laid edge on. The nave and aisles are covered by a broad, continuous roof, there being no clerestory. The aisle walls have broad bays with windows each recessed under an arch. At the foot of the windows a sloping tiled section restores the wall plane to its prevalent thickness. Most unusually the window frames, mullions and cusping are of wood, as are most of the other windows through the church except for those at the west and east ends. Brick and tiled gables break through the aisle roofs and are the external expression of arches over the passage aisles inside. The south chapel has two seats of plain four-light windows. The eastern parts of the church present complex massing. A low tower is placed over the choir and is ornamented on its top with small triangular details. To its east is the sanctuary with tall two-light wooden windows north and south and a large, high-set east window with a central brick buttress and four lights either side of this. To the north is the large bulk of the organ chamber and the lower, separately gabled vestry. On the south is the three-sided east end of the chapel.

INTERIOR: the interior is now all plastered and whitened apart from the red brick detailing. The nave has four-bay arcades with lozenge shaped piers into which the arches die. Its arches, like those in the rest of the church, have an outer order of bare brick. The aisles are narrow passages which are covered by east-west plastered arches. The chancel is considerably narrow than the nave and either side of the chancel arch are low arches to passages running either side of the choir. The south chapel leads of the southern passage aisle through a pair of arches as wide as the nave arcades but lower and with depressed heads. The arch-braced nave roof is carried on bulky corbels sitting on the tops of triangular wall-shafts. In the nave and aisles there is wood-block floors while the choir and sanctuary have grey and red tiles laid in a zig-zag pattern. The pews have been removed from the nave.

PRINCIPAL FIXTURES: on the south side of the chancel is a combined double sedilia and piscina under a very shallow arched head. The most notable furnishings are the choir-stalls with beautifully detailed ends and frontals. The nave is seated with modern chairs. The font is a conventional octagonal design with plain detailing. A semi-circular platform has been extended west of the choir to accommodate a nave altar by Covell Matthews, installed in the 1970s.

HISTORY: prior to the present building there was a temporary timber church of 1871 on another site. This was Bandon Hill church, a daughter church of St Mary, Beddington. The tenders for the new church were received in May 1906 and the contract was let to E J Burnand and Co for £6,293. The foundation stone (on north side of the north aisle) was laid on 16 June by Harry Lloyd in the presence of the Bishop of Kingston. The new building opened in 1907 and the timber church was dismantled that year and sold to the Rev J F Perry of Carlton, Nottingham. The west end was finished in 1928, but the intended tower over the crossing was never built.

The architect of St Michael's, William Douglas Caröe (1857-1938), was a leading church architect at the end of the C19 and in the early C20. He was articled to Edmund Kirby of Liverpool in 1879-80 but transferred his articles in 1881 to the great Gothic revivalist, J.L Pearson, until 1883. He travelled extensively on the continent in 1877-1882 before setting up in practice in London in 1883 after which he developed a prolific church-building and restoration practice and became architect to the deans and chapters of Southwell, Hereford, Brecon and Exeter. He was architect to the Charity Commission and to the Ecclesiastical Commission from 1895. Caröe is noted for his freely-treated and imaginative treatment of the Gothic style. His grandest and finest church is St David's in Exeter.

St Michael's is a good example of Caroë's approach to Gothic. Although rooted in medieval architecture, of which he had considerable knowledge, it is originally handled. The massing of the building, the treatment of the aisle side windows, the use of red brick heads to the internal arches and the extraordinary use of wooden windows are all things that are very much of the early C20 rather than the Middle Ages. Freeman describes the church as 'outstanding among Caroë's suburban churches......The refinement of the interior is astonishing because it is unexpected and so skilfully managed'.

REASONS FOR DESIGNATION:
The Church of St Michael, South Beddington, is designated at Grade II for the following principal reasons:
* It is a good example of freely-treated Gothic church building in the early years of the C20 with both exterior and interior displaying subtleties of designs.
* It is representative of the work of its well-known architect, W.D. Caroë.