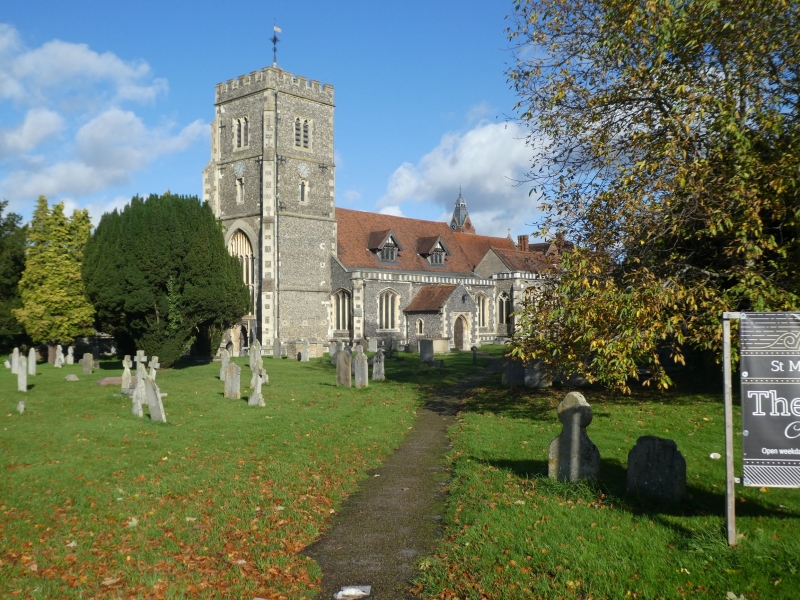 EXTERIOR: The church occupies a prominent position in Beddington Park, immediately S of what is now Carew Manor School and which was from the late Middle Ages the seat of the Carew family. The W tower has four stages, diagonal buttresses on the W face and a very large Perpendicular transomed W window. The belfry windows are of two lights under a square heads, and, above, the embattled parapet is a Victorian addition. There is a NE stair turret which rises above the level of the battlements. The S elevation has a continuous roof over the nave and S aisle, punctuated only by a pair of timber dormers inserted c.1914 (there are similar dormers on the N side of the nave). The Carew chapel is also under its own gable and projects further S than the N aisle. The windows on the S side are mostly three-light Perpendicular ones under depressed heads. The plain parapets with their sharply contrasted white stone and flint chequering, and probably the similar treatment of the base-course of the aisle is C19 work. The E window of the chancel is of five lights with early C14-style tracery including a large traceried circle in the head. The four-bay outer N aisle has windows with early C14 tracery. At its W end is a somewhat ungainly two-storey vestry block added c1869, with, to the W, a double gable and paired two-light windows set above a continuous band of fenestration occupied by a pair of three-light windows under a square-head and with rows of three circles in the upper parts of the lights. On the N of this block is a large, tall chimneystack. To the NE of the church is a large parish centre dating from 1995.

INTERIOR: The medieval nave consists of four bays with arcades to the aisles. The piers have four demi-octagonal projections with a recess between each. The arches have double chamfers and no hood. The N aisle is very narrow and to its N a wider outer aisle was added in the C19, in this case with quatrefoil piers with foliage capitals and double-chamfered arches. At the entrance to the chancel is a tall arch with responds of three lobes with fillets. The roof over the nave is arch-braced to a collar above in which there is a tracery infill either side of a crown-post. The chancel roof is also arch-braced, as is that in the chancel, but here there are also projecting hammer-beam-like busts of angels which carry the arch-braces. The roof of the nave, chancel, and outer N aisle are all decorated although darkening makes the patterns hard to recognise: the chancel roof has IHC symbols set in crowned quatrefoils. Much of the character of the building derives from the very extensive mid-Victorian wall paintings. The nave walls are covered with patterns and roundels with angels with scrolls while over the chancel arch there depictions of numerous angels. The chancel scheme depicts scenes of the Annunciation, the Visitation etc. The E window is flanked by mosaic representations of saints and the lower part of the sanctuary walls is revetted with alabaster slabs.

PRINCIPAL FIXTURES: Apart from some possible C12 fragments placed in the N aisle, the oldest item is the c1200 square Purbeck marble font with shallow incised arches filling each face and standing on a central drum and with four angle shafts. Nine of the stalls have late C14 misericords with shields, foliage and two heads. The screen behind to the Carew chapel is of similar date. The pulpit dates from 1611 and has linenfold in its two tiers of sunk panels and arabesque decoration on the corners. The C19 work is extensive. The largest item is a large, north European-style reredos depicting the Last Judgement at the W end of the N aisle, said to be either by Clayton and Bell (Re: Cherry and Pevsner) and given in 1869, or of French or German origin. At the same time the organ screen was given and is an early work by Morris and Co, having stylised foliage below, then a procession of six musicians, openings infilled with grids, and at the top a bracketted support for the pipes. The organ was built by T C Lewis and restored in 1992 by Henry Willis and Sons. The triple sedilia have stone gable-headed canopies over trefoil arches and wooden dividers between the seats: they are integral with the piscina to the E. The pews have poppy heads: the ends have tracery in the E part of the nave and none in the W part. The stalls are largely C19 work but incorporate the misericords mentioned above. Between the chancel and nave is a tall screen with large one-light openings. The lower vestry at the W end of the outer N aisle contains some fine cupboards with Gothic detailing. There is extensive stained glass from the C19 and C20. The E window replaces the glass lost in the Second World war and is a fine work by Patrick Nuttgens representing the Te Deum.

There are a number of monuments of note. The oldest is a brass to Philippa Carew (d 1414) in the chancel floor which also houses the brass to Nicholas Carew (d 1432). In the Carew Chapel there is a fine Perpendicular recess to Sir Richard Carew (d 1520) and his wife: the front of the chest has large-scale quatrefoil decoration and on its top are brass figures of the deceased. To the E of this is the elaborate monument to Sir Francis Carew (d 1611) whose alabaster effigy lies on top of the tomb chest with his kneeling family in relief against the front; the canopy is supported by two columns and has obelisks and an achievement at the top.

SUBSIDIARY FEATURES: To the W of the church is an attractive Victorian timber lych-gate carrying a large gambrel roof, probably of c1868 by Clarke. Good churchyard walls of red brick, the part adjoining the Manor House of the C17 or earlier. Across the road from the lych-gate there is a C19 entrance gate to a burial ground: it has two openings of different sizes and above these pyramidal tiles roofs of two different sizes.

HISTORY: St Mary¿s was intimately bound up with the Carew family from the mid-C14. The first member to reside at Beddington was Nicholas Carew I, who acquired the lordship of this and other adjacent manors, by his marriage to the daughter of the former owner, Sir Richard Willoughby. He died in 1390 and left £20 for rebuilding work at the church which probably involved the tower, porch and possibly the chancel. He directed that four fit chaplains should `pray for his soul and all Christian souls¿ in the church.

Much of the church is the result of work in the mid-C19. The main benefactor was the Rev Alexander H Bridges, a wealthy man who also acquired much of the adjoining park, and who was rector from 1864 to 1891. He paid for considerable works undertaken in 1867-9 under Joseph Clarke, but it is suggested in the church guide that there were also major alterations c1851 (not mentioned in Cherry and Pevsner). This is thought to be the date of a lithograph displayed in the church bearing Clarke¿s name and which shows the roof (which seems to be C19 work) as it is now but with the church filled with box-pews and galleries in the aisles. The E window design is also different between the lithograph and what we see today. The addition of the outer N aisle has been suggested as providing seating for girls from the Royal Female Orphanage which was housed at Beddington Manor from 1762 until 1968. The aisle may be the work of c1851 but this is not clear. However, there can be little doubt that the lavish embellishment of the walls is an early product of Bridges¿ incumbency while the style of the NW vestries and their furnishings are of the 1860s, not the early 1850s. A tablet in the tower area commemorates the work of Bridges¿ `by whose munificence this church was beautified and largely restored¿.

Joseph Clarke (1819 or ¿20-1888) was a London-based architect whose practice was very largely concerned with church-building and restoration. His known works date from the middle of the 1840s until the time of his death. He was diocesan surveyor to Canterbury and Rochester and, from 1877, the newly-created diocese of St Albans. These posts helped bring in numerous commissions in these three dioceses but he also gained jobs over a much wider geographical area and examples of his work can be found in most parts of England. He was consultant architect to the Charity Commissioners.

REASONS FOR DESIGNATION:
The church of St Mary the Virgin, Beddington, Sutton, is designated at Grade II* for the following principal reasons:
* It has substantial amounts of fabric from the C14 and C15
* Was extensively restored and provided with an extremely elaborate and interesting mid-Victorian decorative scheme.
* It has monuments and other fixtures of importance from c.1200 to the C20, including font and Carew tombs.
* The Morris and Co. organ is of special note, and the Last Judgment reredos is unusual.