The Middle Tower, with Causeway to Byward Tower (QV) and Remains of Causeway to Lion Tower to West

A Grade I Listed Building in St Katharine's & Wapping, London 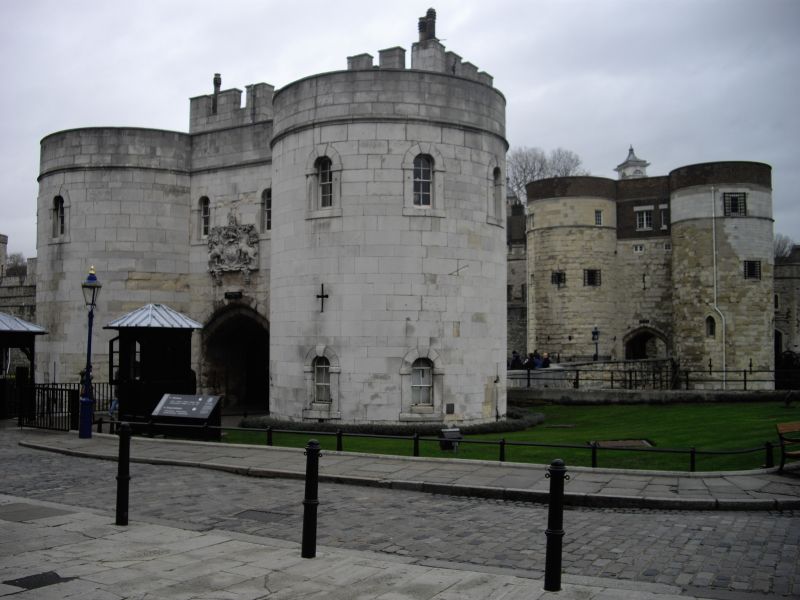 Entry Name: The Middle Tower, with Causeway to Byward Tower (QV) and Remains of Causeway to Lion Tower to West

THE TOWER OF LONDON
TQ 3380
21/883 The Middle Tower, with
Causeway to Byward
Tower (qv) and Remains
of Causeway to Lion
Tower to west

Gatehouse. 1275-81; later alterations, principally 1717-19 by Robert Churchill
when upper floors rebuilt. Squared and coursed ragstone; refaced in Portland
stone in 1717-19. Plan of entrance passage flanked by 2-storey cylindrical
towers which have 3-storey rectangular turrets to rear. Arms of George I, by
Thomas Green, above pointed chamfered arch of 2 orders, with portcullis slot and
rearward arch with meurtrieres; early C18 double doors. Restored loops; windows
set in early C18 semicircular arched architraves with keyblocks and impost
blocks. Similar fenestration to sides and rear, which has crenellated towers
flanking central bay which has early C18 stonework (replacing original timber
frame) above pointed chamfered arch; early C18 sentry box attached to south-east
corner. Interior: lined with C13 brick; studded doors set in mid C19 pointed-
arched architraves on either side of passage, leading on north side to vice and
passage with steps to octagonal-shaped room with chamfered ribs to vault
(restored in C19) and 6 embrasures and on south side to similar room with
restored late C13 fireplace. Subsidiary features: causeway running from east
entry to Byward Tower (qv) refaced in C18. Remains of 1275-81 causeway to west,
with pointed chamfered archway to north attached to foundations of Lion Tower and
outwork of 1275-81, to north.