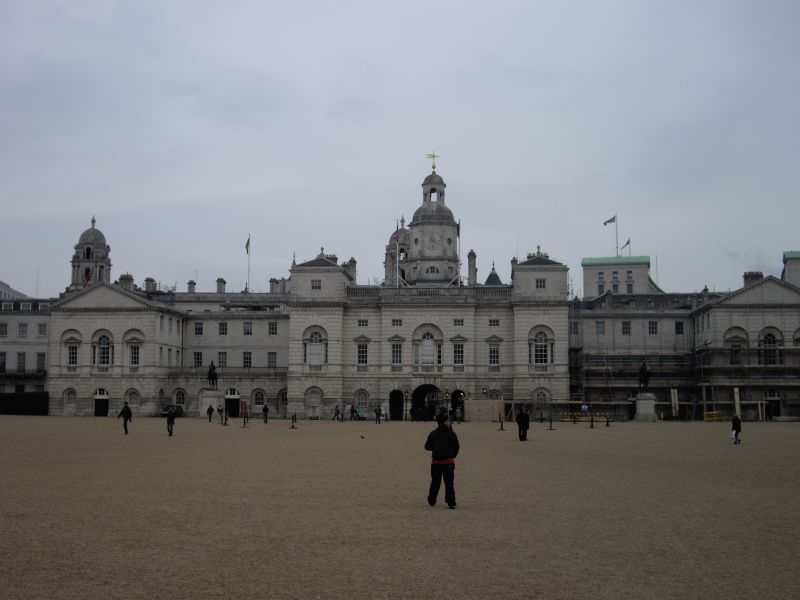 TQ 3080 SW CITY OF WESTMINSTER WHITEHALL SW1
83/74 (West side)
5.2.70 Horse Guards
GV I
Army headquarters. c.1745-48 design by William Kent, built 1750-59 by
John Vardy and William Robinson, of the Office of Works. Portland stone,
slate roofs. The major Palladian public building of the Burlington-Kent
school, but characterised as at Holkham (which it resembles) by Kent's
staccato massing and isolation of the component elements of the symmetrical
composition. Whitehall front has main block set back behind forecourt: 3-
storeyed, 3-window wide pedimented centrepiece with one-window links to 4-
storey, 1-window projecting pavilions; from subsidiary wings 2-storey
ranges enclose north and south sides of forecourt and link with the rear of
2-storey, 7-window wide street front pavilions with 3-window pedimented
centre breaks. (N.B. Forecourt railings and guardhouses, see separate
entry.) Venetian composition of vaulted carriage archway and side footways
beneath centre block. Recessed glazing bar sashes; semicircular arched and
set in blind arcading on ground floor; architraved with cornices to principal
bays on 1st floor where the central window and those in the angle pavilions
are set in semicircular arched panels. Pediment of main block with carved
Royal Arms, balustraded parapet over links and pyramidal slate roofs over
attic storeys of angle pavilions. The Horse Guards Parade front has similar
main block but with inscribed Venetian windows to centre and over archway
and to 1st floor of angle pavilions; instead of a pedimented centre, a
balustraded parapet is carried across between the angle pavilions. 3-storey,
5-window wide wings are set well back but with advanced arcaded ground floors
with balustraded parapets, and with projecting 2-storey, 3-window, pedimented
terminal pavilion-wings. The latter have central inscribed Venetian windows
flanked by semicircular arched recesses of the same size containing pedimented
windows, all with blind balustrades below sills. On this front the ground floor
has rock faced rustication with ashlar rustication to upper floor of main block
and terminal pavilion wings. Over the centre of the main block rises an
octagonal, domed clock tower with cupola lantern (repeating a distinguishing
feature of the old Horse Guards) that breaks the Palladian canon, owing more
to Vanbrugh in its contours and detail. The interiors relatively plain
except for the principal rooms in the main block and the octagonal hall
open to the lantern; etc. As in other Kent-Burlington designs the General
Wade's House elevational theme, based on a Palladio town house elevational
drawing acquired by Lord Burlington in 1719, appears on the Horse Guards
Parade front.
Survey of London: vol XVI
Tracing a Palladio Elevation; Dan Cruickshank; AR 1045 March 1984