Belgian Monument to the British Nation 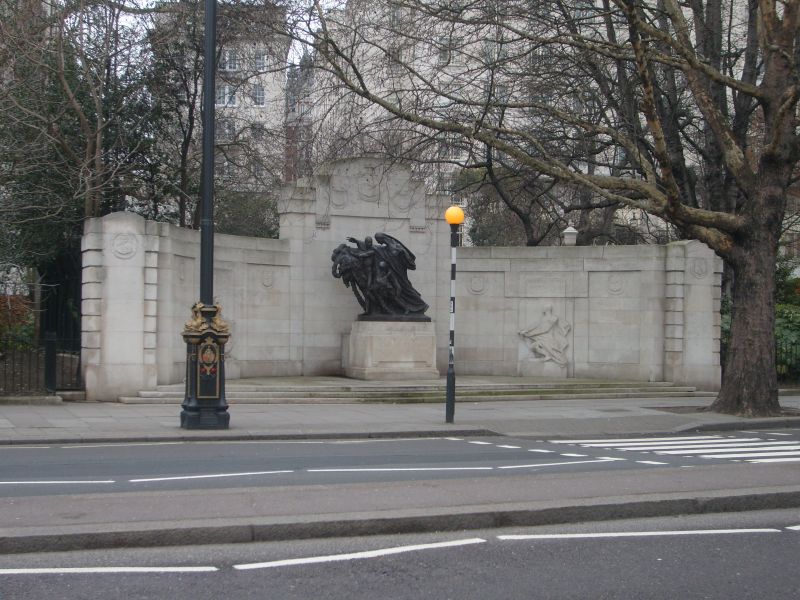 Unveiled in October 1920, this memorial was a tribute to Great Britain from the people of Belgium, in recognition of the welcome extended to refugees seeking refuge from the German invasion of Belgium in August 1914.

DESCRIPTION: sculpture by Victor Rousseau; architectural setting by Sir Reginald Blomfield RA. The memorial, unveiled in October 1920, consists of a bronze figural group set on a rectangular stone base. The group depicts a mother, drapery-clad and with an elongated neck, urging two garland-bearing children forward. According to the sculptor, “I designed the group representing Belgium as a woman draped in mourning, in the act of telling her children that Belgians will never forget their debt of gratitude to Great Britain. The garlands and other floral offerings borne by the children are symbolical of the wealth of the nine Belgian provinces. As for the children themselves, the lad and the little girl are designed to typify the spirit of youth and the confidence in the future, which is the most marked characteristic of the Belgian nation”. The group stands on a broad paved area, reached via four steps. Behind it is a stone screen, classical in design, with a taller central section central section flanked with curved wings: on the left is a relief carving depicting Justice, shown holding the 1837 Treaty of London which guaranteed Belgian neutrality, and matched on the right with one of Honour, represented as St George (both seriously eroded at time of inspection in 2014). At the top of the inset panels to the wings are relief carvings of the provinces of Belgium. The rear of the memorial incorporates a seat.

This memorial was a tribute to Great Britain from the people of Belgium, in recognition of the welcome extended to refugees seeking refuge from the German invasion of Belgium in August 1914. This invasion led directly to Britain’s entry into the First World War. Plans for a memorial arose in 1916, and the Belgian sculptor Victor Rousseau, then a refugee in London, received the commission. Subscriptions were raised from Belgian troops, as well as donations from the Belgian royal family. A prominent location opposite Cleopatra’s Needle was finally made available by the London County Council; the Office of Works was involved in securing Blomfield’s architectural setting for the sculptural group.

Victor Rousseau (1865-1954) was Professor of Sculpture (and later Director) at the Académie Royale des Beaux-Arts, Brussels. A Walloon, he trained under Charles van den Stappen and contributed sculptural enrichment to several projects by the noted architect Victor Horta. The allegorical group shows Rousseau’s interest at this time in Mannerism, as in the stylized elongation of the mother’s neck. The stone reliefs of Justice and Honour were carved in London from Rousseau’s models.

The memorial was unveiled by Princess Clementine of Belgium on 12 October 1920: the fifth anniversary of the execution in Brussels of Nurse Edith Cavell. Léon Delacroix, Belgian Premier, in his speech referred to the self-sacrifice of British troops serving in Belgium: a parallel memorial in Brussels, sculpted by Charles Sargeant Jagger, was unveiled in 1923. Another memorial to the gratitude of Belgian refugees was erected at Milford Haven, in Wales.

The Belgian Monument to the British Nation is listed at Grade II* for the following principal reasons:
* Historic interest: the memorial is an unusual tribute to hospitality received by Belgian refugees fleeing German invasion, and reflects the impact of conflict on civilian populations, poignantly expressed through the fatherless family group;
* Sculptural interest: by a noted Belgian sculptor, the memorial’s bronze group is of fine quality and is a rare example in England of continental public statuary;
* Group value: the memorial stands on a prominent thoroughfare in London, and enjoys strong group value with Cleopatra’s Needle directly in front of it, and with the 1921 Imperial Camel Corps War Memorial and other statues in Victoria Embankment Gardens.