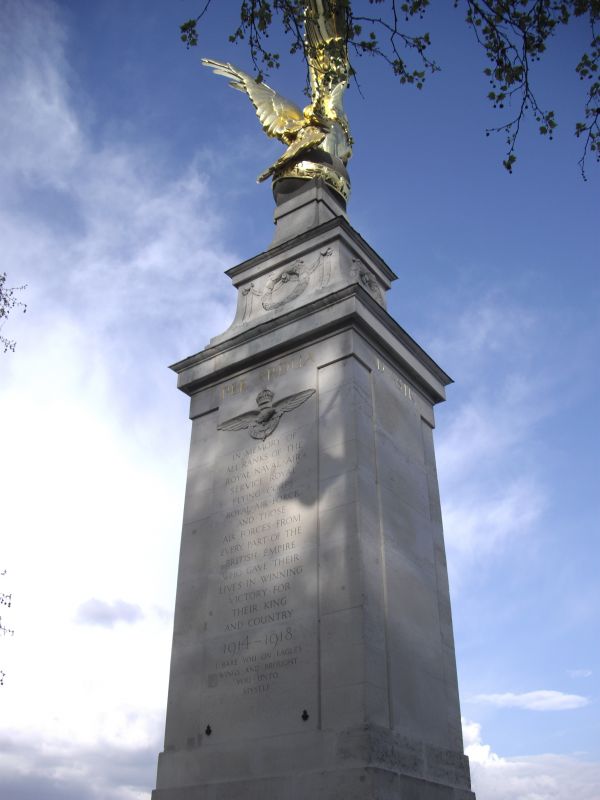 The memorial stands at the head of Whitehall stairs which form part of Sir Joseph Bazalgette’s Victoria Embankment scheme of 1864-1870 (Grade II-listed). Outside the Ministry of Defence (Grade I-listed), it is in close proximity to the Grade II-listed statues of General Gordon and Lord Trenchard, and a number of the Embankment’s Grade II-listed Catenary lamp standards.

The memorial is constructed in Portland stone and consists of a tall pylon on a stepped base with a deep cornice, surmounted by an upswept two-tier pedestal bearing a gilded bronze eagle with wings upstretched. The eagle, looking across the river towards France, is perched on a bronze globe encircled by a gilded band with the signs of the zodiac. The faces of the pedestal are carved with laurel wreaths and garlands.

Around the top of the pylon the faces are inscribed alternately PER ARDUA and AD ASTRA (the RAF motto, meaning ‘through adversity to the stars’). The east and west faces have vertical, slightly raised panels carved at the top with the original RAF badge approved by the Air Council in 1918.

Below the badge, the west face is inscribed IN MEMORY OF/ ALL RANKS OF THE/ ROYAL NAVAL AIR/ SERVICE ROYAL/ FLYING CORPS/ ROYAL AIR FORCE/ AND THOSE/ AIR FORCES FROM/ EVERY PART OF THE/ BRITISH EMPIRE/ WHO GAVE THEIR/ LIVES IN WINNING/ VICTORY FOR/ THEIR KING/ AND COUNTRY/ 1914 – 1918, and a quotation from Exodus 19:4 reading I BARE YOU ON EAGLES/ WINGS AND BROUGHT/ YOU UNTO/ MYSELF.

The base is inscribed THIS INSCRIPTION IS ADDED/ IN REMEMBRANCE OF THOSE/ MEN AND WOMEN OF THE/ AIR FORCES OF EVERY PART OF/ THE BRITISH COMMONWEALTH AND EMPIRE/ WHO GAVE THEIR LIVES/ 1939 – 1945.

The aftermath of the First World War saw the biggest single wave of public commemoration ever with tens of thousands of memorials erected across England. This was the result of both the huge impact on communities of the loss of three quarters of a million British lives, and also the official policy of not repatriating the dead which meant that the memorials provided the main focus of the grief felt at this great loss. As well as personnel from the Army and Naval services, British losses now included members of the Royal Flying Corps and Royal Naval Air Service.

The First World War was the first conflict in which aviation played a major role for all the combatant nations involved. Prior to the Wright brothers’ achievement of controlled aircraft flight in America in 1903, the military services of various nations had used balloons and airships at war: for example, tethered observation balloons were deployed during the American Civil War (1861-1865). In Britain, the Royal Engineers became responsible for the Army’s ballooning capability in the 1860s. Despite the sceptical views of the Chief of the Imperial General Staff and the First Sea Lord expressed in 1910, an Air Battalion of the Royal Engineers was formed in 1911 and on 13 April 1912 the Royal Flying Corps (RFC) was established, formed of a Military Wing and a Naval Wing. The Admiralty’s Royal Naval Air Service (RNAS) followed on 1 July 1914.

At the outbreak of war in August 1914 the RFC comprised 146 officers and fewer than 100 aircraft, whilst the RNAS counted just over 700 personnel, 93 aircraft, two balloons and six airships. By the end of the war in November 1918 the air service had expanded to some 27,000 officers and 260,000 other personnel, operating more than 22,000 aircraft across 188 squadrons. Both RFC and RNAS included servicemen from Dominion countries. Similar expansions were seen in the air services of the other armies, as the First World War provided a unique impetus to fast-track technological advances in aviation around the world.

On the advice of the Smuts Report the RFC and RNAS were merged on 1 April 1918 to form the Royal Air Force (RAF), the world’s first air force independent of army or navy control. At the end of the First World War official figures recorded 14,166 air service casualties, of whom around 9,000 men were dead or missing in active theatres of conflict. Some 8,000 had died during training.

Following considerable debate over the nature and location of the national memorial to the Royal Air Force, the RAF Memorial Committee, reformed in June 1919 under the aegis of Sir Hugh Trenchard, with Prince Albert (the future George VI) as its patron, chose a site at the entrance to Whitehall Stairs on Victoria Embankment. On 20 January 1920 the committee launched an appeal in The Times newspaper to raise funds to pay for the memorial, and the eminent architect Sir Reginald Blomfield was selected to undertake the design.

Blomfield’s proposal for a stone pylon had already been used for war memorials for Torquay and Luton (both Grade II), each crowned with a different feature. The sculptor William Reid Dick was selected by Blomfield to undertake an eagle sculpture: the design appears to have been largely conceived by the architect. The drawings and models were exhibited at the Royal Academy in 1922. At that time the eagle was intended to face the Embankment, instead of the river as executed. The memorial was unveiled on 16 July 1923 by the Prince of Wales, who spoke of the ‘new service’ as ‘our cloud armies of the future’. Lord Trenchard unveiled the additional inscriptions for those who died in the Second World War on Battle of Britain Sunday, 15 September 1946.

Sir Reginald Blomfield RA (1856-1942) was one of the principal architects commissioned by the Imperial (now Commonwealth) War Graves Commission, alongside Sir Herbert Baker and Sir Edwin Lutyens. In addition to his extensive pre-war private practice, he designed a number of the First World War cemeteries in France and Belgium; the Menin Gate memorial to the missing at Ypres (also in collaboration with William Reid Dick); and war memorials in the UK, including the architectural setting of the Belgian War Memorial (unveiled 1920, Grade II*-listed). In 1918 he designed the Cross of Sacrifice, which is erected in cemeteries both overseas and in the UK that have more than 40 military graves. Its design was widely praised and has in consequence been used and adapted for numerous community war memorials.

The Glasgow-born sculptor Sir William Reid Dick RA (1892-1961) served as a stonemason’s apprentice before training at the Glasgow School of Art (1906-1907). In 1907 he moved to London, taking evening classes at South London Technical School of Art while working for the sculptor Edwin Whitney-Smith, and began exhibiting at the Royal Academy in the following year. From 1915-1919 Dick served with the Royal Engineers in France and Palestine. Between the wars, he distinguished himself with monumental architectural sculptures for leading architects of the day, including Sir Edwin Lutyens and Sir John Burnet. His war memorials include those at Bushey and Rickmansworth (Hertfordshire, both Grade II-listed). He was President of the Royal Society of British Sculptors from 1933 to 1938.

The Parlanti art bronze foundries were active in Britain from 1890 to 1940. Ercole Parlanti (c1871-1955) was running the Beaumont Road foundry, Fulham, from about 1917. The foundries cast numerous figures for war memorials, including the Category A-listed Glenelg memorial by Lorimer and Deuchars, and a number of listed war memorials in England such as those at Sheffield and the Boer War Memorial in Cannon Hill Park, Birmingham (both Grade II*-listed).

The Royal Air Force War Memorial, which is situated on Victoria Embankment, is listed at Grade II* for the following principal reasons:

* as an eloquent witness to the sacrifices made by air force personnel in the conflicts of the C20;
* as the national memorial to the Royal Air Force erected after the First World War, the conflict which revolutionised military air power and culminated in the creation of the RAF as Britain’s third independent armed force.

* a dignified and elegant design with a fine bronze sculptured eagle, the symbol of the RAF, by Sir Reginald Blomfield and William Reid Dick, highly distinguished figures in their respective fields.

* the memorial adjoins the Grade II listed Victoria Embankment walls and has a strong visual relationship with the Ministry of Defence building opposite (Grade I); it can also be seen in conjunction with the statue of Hugh Trenchard (Grade II) in Victoria Embankment Gardens to the south-west.