A Grade I Listed Building in St James's, London 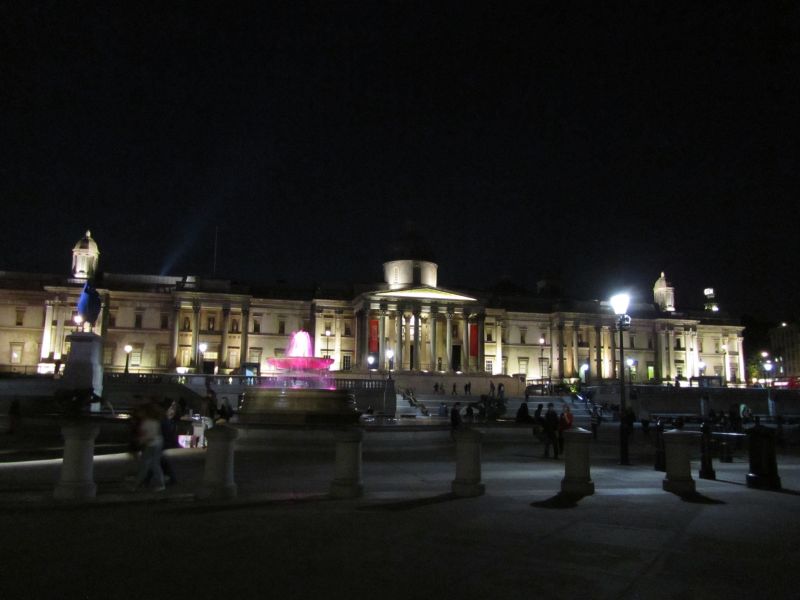 TQ 2980 NE and 3080 NW CITY OF WESTMINSTER TRAFALGAR SQUARE, WC2
71/106; 72/134
5.2.70 National Gallery
G.V. I
Picture Gallery. 1832-38 by William Wilkins, built to "command" the north side
of new square and house the Angerstein Collection, purchased by the government
at the instance of George IV, as well as, originally, to accommodate the Royal
Academy. Portland stone, concealed glazed gallery roofs. Fine, scholarly,
Graeco-Roman classicism that reads well in perspective but is weak as a frontal
composition with too even a balance in the accents that attempt to vary this
long elevation. 2 storeys on plinth. 32 windows wide with central octastyle
pedimented portico with secondary tetrastyle portico entrances and terminal
pavilions. The central Corinthian portico is effectively raised on podium wall
with flanking steps. Set back behind portico pediment is a stone cupolaed dome
on stone drum. The centrepiece of the main portico is flanked by 2 giant
pilastered bays before breaking back to the main wall plane of the wings.
Architraved sash windows with cornices on ground floor, blind on 1st floor. The
secondary Corinthian tetrastyle porticoes have parapets raised over central
bay. The terminal pavilions have pairs of flanking giant pilasters and are
surmounted by small octagonal stone cupolas with pierced work openings. 1st
floor sill band; main entablature with dentil cornice and crowning balustraded
parapet. The columns from Holland's demolished Carlton House were intended for
the portico but in the end only bases and reworked capitals from Carlton House
were reused for the secondary porticoes in the wings. On east facade frontal is
a seated statue of Minerva by Flaxman made as a Britannia for Marble Arch.
Existing interiors principally by E. M. Barry, 1867-76, vestibule and central
hall by Sir J. Taylor, 1885-87. The National Gallery site had already been
proposed for this purpose in Nash's Metropolitan Improvements as of course the
overall plan of the square.
Survey of London. Vol XX.
Georgian London;John Summerson.