The Deanery and Sub Dean's Residence with the Jericho Parlour 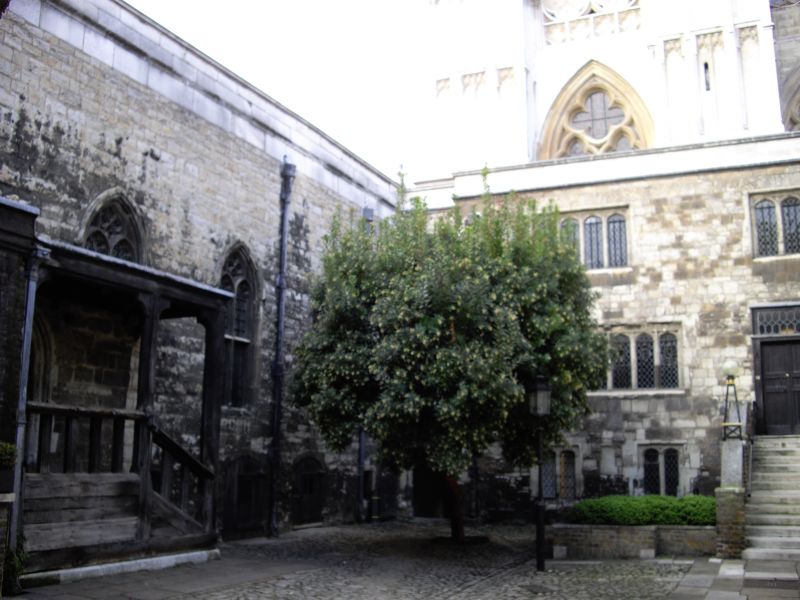 Entry Name: The Deanery and Sub Dean's Residence with the Jericho Parlour

Former Abbot's Lodging. Principally of c.1370, with the Jericho parlour
early C.16, and C.17 and C.19, with some mid C.20 rebuilding. Grey and
buff stone and painted brick, tiled and leaded roofs. Built round oblong
courtyard flanking the west side of the Cloister with the north range
abutting the south west tower of the Abbey and the south range flanking the
Parlour (see under Great Cloisters), and extending into the north east
corner of Dean's Yard. Access to main courtyard by tierceron vaulted
passage off the Parlour. The west range comprises the Abbot's Hall (now
College Hall) of c.1370 with C.19 battlemented parapet; the hall interior
has a low pitched, king post roof with heavy tie beams on arched braces,
with traceried spandrels, springing from stone angel corbels; 2-light
windows with similar tracery to those in Abbot Litlyngton's mid C.14
completion of the Cloister, restored (glazed 1375-76); at the south end is
a plain C.17 screen with gallery; beyond, to south, lies the kitchen with
large fireplace in east wall; north of the hall is the Jerusalem Chamber
with low pitch arched brace tie beam roof, renewed 2-light west window and
Perpendicular 4-light north window; C.16/C.17 fireplace with Tuscan columns
and 2 more orders of columns. to the c.1630 overmantel; exceptionally fine mid
C.13 stained glass medallions reset from Abbey Church; the basement of the
Jerusalem Chamber has a row of oak posts down centre. The north range of
the courtyard in the early C.16 Jericho Parlour erected by Abbot Islip, of
3 storeys and irregular 4-window width; 4-centred arched doorway and later
external stone staircase access to 1st floor, stone mullioned windows of
2,3,4 and 8 lights camber headed; the basement-ground floor contains a C.14
cross wall and a small room with early C.16 brick vault; principal room on
1st floor with linen-fold panelling, to the west of this parlour a small
lobby with early C.16 lamp-niche; the 2nd floor has 3 rooms, 2 with
original early C.16 moulded ceiling ribs, C.16 and C.17 panelling. The
east range of the courtyard is of c.1370 build to the courtyard with later
alterations, stone and later brickwork painted white; 2 and 3 storeys with
stone mullioned square headed windows but the western part of range rebuilt
late C.17 and early C.18 as 2 brick houses facing garden behind west
Cloister walk; the south end of range rebuilt after World War II. 2 and 3
storeys with pedimented dormers to attics. Irregular 3 and 4 light stone
mullioned windows to courtyard; west C.17/C.18 front to garden backing on
to west Cloister walk has 3 window wide elevations with flush framed
glazing bar sashes under flat gauged arches and 2 sashed oriels, one of them
pedimented. The south range of Deanery, over vaulted passage from the
Parlour, has renewed 3 and 4-light stone mullioned windows and a renewed
C.14 window lighting room with late C.18 neoclassical fireplace and c.1740
overmantel with swan neck open pediment; the range continues into south end
of the Hall with 3 storey battlemented elevation to Dean's Yard, renewed
mullioned windows.