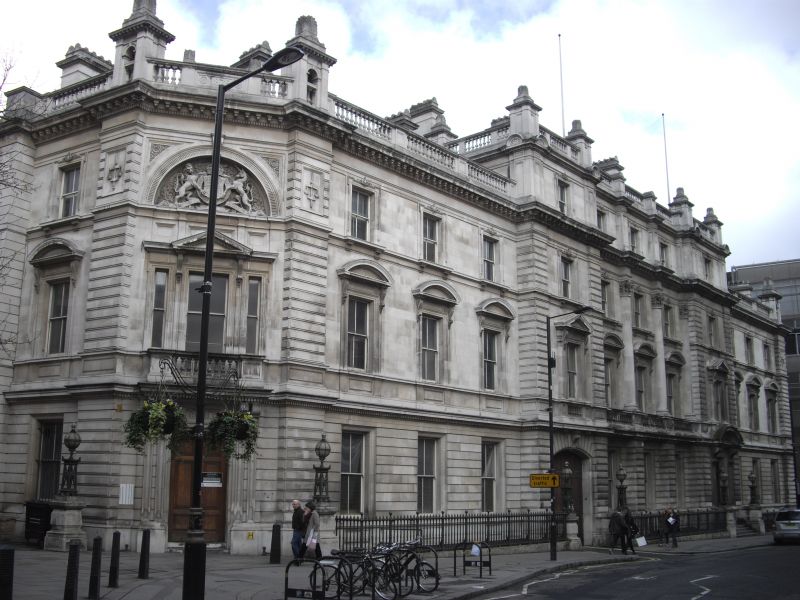 GV
II
Former Court and police station. 1879-80 by Sir John Taylor of the Office of Works in dignified, eclectic Graeco-Roman with some slightly Vanbrughian details, rather in the Pennethorne manner.

PLAN: a free standing quadrangular block of three storeys, basement and attic storey over a five bay centrepiece. Eight windows wide, composed as five-window centrepiece including advanced flanking entrance-pavilion bays, with a three-window wing either side, splayed one window corner and eight-window return to Broad Court.

EXTERIOR: channelled ground floor with van and police station entrances in centrepiece pavilions, the entrance to the police station to right with flight of steps
and stone architrave doorway and segmental pediment on consoles projecting above from ground floor cornice, the van entrance plain under segmental arch, both framed, as are the central ground floor windows, by deeply channelled piers which are carried up as quoin piers on the pavilions and are repeated as broader terminal piers to the wings. Recessed sash windows, those on first floor in architraves with segmental pediments on consoles but with triangular pediments in the pavilions; eared architraves to second floor and centrepiece attic. The three central bays between pavilions have engaged giant Corinthian order to the first and second floors and panelled piers in the attic, repeated on the pavilion attics. Pseudo-pedestals to ground and first floors with apron panels to the wings and fully expressed as balustraded balcony in front of three central bays. The second floor sill course carried over quoin and terminal piers, bed mould to frieze and bold main cornice over second floor, broken forward over piers and giant order, with balustraded parapets over wings and Vanbrughian belvedere features over terminal piers; similarly handled cornice to centrepiece attic, with acroteria and miniature belvedere features above quoin piers of pavilions and balustraded parapet with projecting dies. Corniced chimney stacks. The splayed corner is similarly treated and contains the Court entrance with a straight entablature instead of segmental pediment but otherwise same detail as police station doorway, tripartite first floor window under arched recess with Royal Arms in tympanum. Sturdy cast iron area railings with stone pedestal-parapets, surmounted by cast iron lamps with crowned globe lanterns, bridging area flanking the three entrances.

Historical note: some of the best-known trials of suffragettes took place at Bow Street Court in the decade before the First World War. The Women’s Social and Political Union (WSPU) was founded in Manchester by Emmeline Pankhurst in 1903. The Union adopted militant forms of direct action including large-scale deputations to Parliament that often resulted in high numbers of arrests. Most of the offences were low-level so would be tried in London’s magistrates’ courts, including Bow Street. In 1908 the WSPU produced a leaflet that urged readers to ‘help the suffragettes to rush the House of Commons’ on October 13. Its leaders, Emmeline Pankhurst, Christabel Pankhurst and Flora Drummond, were arrested and tried at Bow Street. Although women were not allowed to practise law at the time, prisoners could defend themselves. Christabel Pankhurst had a law degree and conducted her own defence, becoming the first qualified woman to cross-examine witnesses in a court. A press photographer known to the Union took covert pictures of the trial showing the three defendants in the dock.